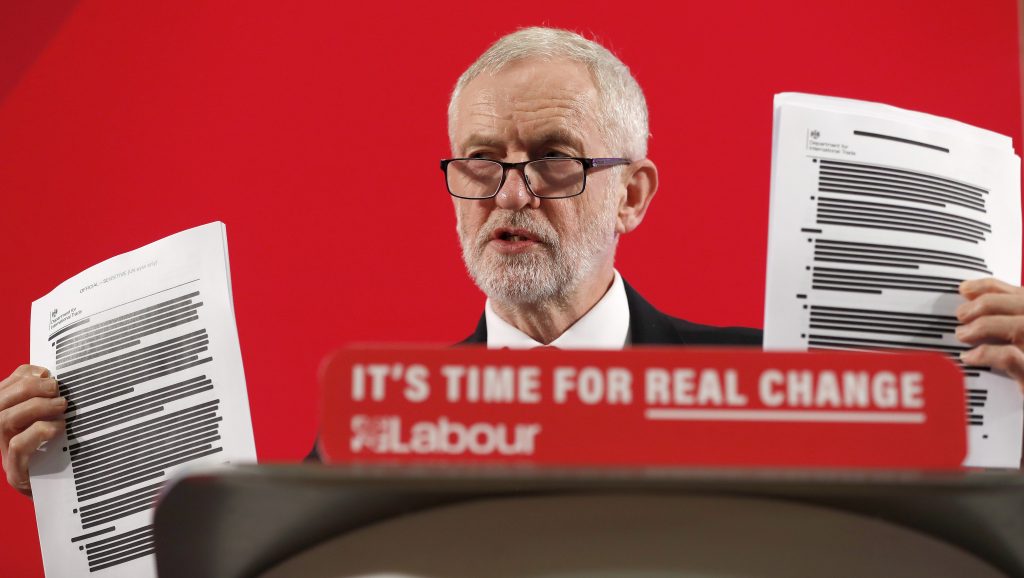 The leader of Britain’s main opposition party, Jeremy Corbyn, accused Prime Minister Boris Johnson of secretly negotiating the basis of a trade deal with the United States ahead of the country’s departure with the European Union — including a contentious plan to extend patents for American drug companies.

The Labor Party’s Corbyn waved 451 pages of documents at a press conference Wednesday, declaring that they covered six rounds of negotiations beginning in July 2017 — preliminary soundings ahead of formal trade talks.

With the future of the National Health Service in focus in the Dec. 12 general election, Corbyn highlighted the drug price issue and argued that extending patents would boost the profits of big pharmaceutical companies at the expense of taxpayers who would be barred from buying cheaper generic versions of the drugs.

“We have now got evidence that under Boris Johnson, the NHS is on the table and will be up for sale,” Corbyn said. “He tried to cover it up in a secret agenda and today it has been exposed.”

Johnson has consistently denied Corbyn’s repeated attack line that the NHS is “for sale.” When Corbyn waved a redacted copy of the document during the first debate, Johnson described Corbyn’s claims as “an absolute invention,” and “completely untrue.”

“We are absolutely resolved that there will be no sale of the NHS, no privatization,” Johnson told the BBC after the documents were released.

“The NHS is not on the table in any way … in no aspect whatever.”

Responding to the leak of the trade dossier, International Trade Secretary Liz Truss accused Labor of trying to change the subject after days of damaging headlines about Corbyn’s stance on anti-Semitism within the Labor Party.

“Jeremy Corbyn is getting desperate and is out-and-out lying to the public about what these documents contain,” she said.

“He has always believed in conspiracy theories — which is why he has failed to crack down on the scourge of anti-Semitism in his party.”

Corbyn cited the drug Humira, which is used to treat a variety of ailments, including rheumatoid arthritis and Crohn’s disease. He said the NHS pays 1,409 pounds ($1,814) a packet, way lower than the equivalent price in the United States of 8,115 pounds.

“We are talking here about secret talks for a deal with Donald Trump after Brexit. A deal that will shape our country’s future,” he said.

“These reports pull back the curtain on the secrecy that’s being plotted for us all, behind closed doors, by the Conservative government.”

The documents also suggested that a post-Brexit deal between the U.K. and the EU involving close links and alignment with the European economy would come at the cost of a special free trade agreement treatment with the United States.

According to the documents revealed by Corbyn, the U.S.’s trade representative made clear that the U.K.–EU situation would be “determinative” — that a U.K. commitment to the EU’s customs union and single market would make a U.K.–U.S. free trade agreement “a non-starter.”

However, the documents showed that the U.S. considers that there would be “all to play for” in the event that no deal is struck between the U.K. and the EU.

Johnson wants to secure a majority in the election so he can push through the Brexit divorce deal he negotiated last month with the EU. Under the terms of that deal, the U.K. would leave the EU on Jan. 31 but remain in the European single market and the customs union until the end of 2020.

After Brexit, the two sides would then commence discussions on the future relationship. Johnson has insisted that he will be able to secure an agreement by the end of 2020 — a timescale that many trade experts find unrealistic.

A dozen signatories to a letter published in the Daily Telegraph on Wednesday urged U.K. leaders from all sides of the political divide to supplant rhetoric with fact-based discussions about Britain’s future outside the EU trading bloc — or risk deals the public won’t support.

According to the letter, which was signed by Alan Winters of the U.K. Trade Observatory and David Tinline, a former senior adviser to the World Trade Organization’s director-general, “engines are being revved towards striking new (free trade agreements) by arbitrary deadlines with little sense of what we actually want to achieve.”