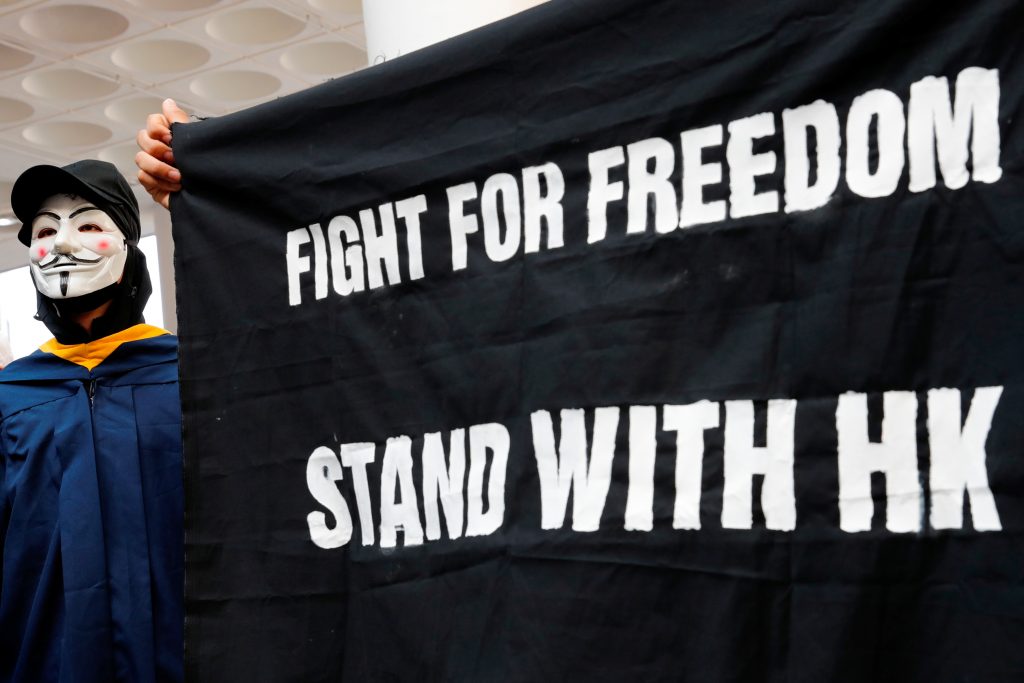 A Hong Kong university student who fell off a parking garage after police fired tear gas during clashes with anti-government protesters died Friday in a rare fatality after five months of unrest, fueling more outrage against authorities in the semi-autonomous Chinese territory.

Some 1,000 masked protesters marched through the busy central district at lunchtime, chanting “Disband the police force,” ”Hong Kong people, revenge” and “A blood debt must be paid in blood.” Some carried white flowers and placards that read “Hong Kong is a police state.”

“His death is a reminder to us that we cannot give up,” one protester said on local television.

Although the cause of his fall has not been determined, it deepened anger against police, who have been accused of heavy-handed tactics including widespread use of tear gas and pepper spray since protests demanding democratic reforms started in June.

Local media reported that Chow has been in a coma with brain injury since he was found early Monday sprawled on the second floor of the building. Police believed he plunged from an upper floor but it wasn’t captured by security cameras.

Minutes earlier, media footage showed riot police firing tear gas at the building after objects were hurled down at the officers in the street when they chased off a mob. Police didn’t rule out the possibility he was fleeing from tear gas but noted officers fired from a distance. Police also denied claims that officers pushed the victim down and had delayed emergency services.

The government expressed “great sorrow and regret” over Chow’s death despite undergoing surgery and treatment.

“The police have stated earlier that they attach great importance to the incident and the crime unit is now conducting a comprehensive investigation with a view to finding out what happened,” it said in a statement.

There have been only few fatalities amid the unrest, with previous reports of deaths by suicide and a man who fell to his death while hanging pro-democracy banners on a building. Last month, two teens were injured after police fired their guns in self-defense in separate incidents but both recovered.

The city’s embattled leader Carrie Lam has refused to budge and provoked more anger last month by invoking emergency powers to ban the wearing of facial coverings at rallies. More than 3,300 people have been arrested and Beijing has indicated it may tighten its grip to quell the unrest.