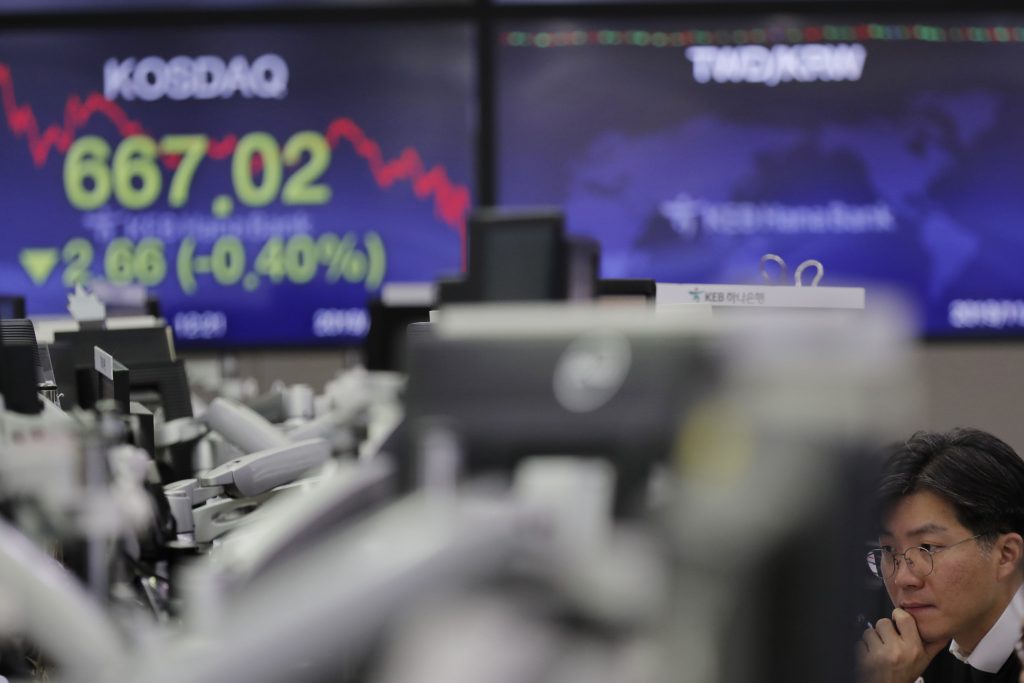 Asian stocks were mostly lower Thursday after a meandering day of trading in the U.S. left stock indexes close to their record highs.

Earlier, a Reuters report that the United States and China may delay signing “phase one” of their trade deal until December sent U.S. shares decisively lower by midday. However, the drop didn’t last long.

The U.S.-China trade war has been a top concern for investors since early 2018, and momentum has recently been tilting toward at least a partial agreement. That, combined with encouraging reports on the economy and corporate profits, have recently propelled U.S. indexes past their prior peaks from July to all-time highs.

While acknowledging that trade talks could easily falter again, Jeff Mills, chief investment officer at Bryn Mawr Trust, said both sides have an incentive to come to a deal. China’s economic growth has slowed under the weight of increased U.S. tariffs. President Donald Trump’s chances of re-election, meanwhile, likely hinge in large part on the economy, and a worsening trade war would only sour it.

Mills is optimistic the economy will show more life after the Federal Reserve cut interest rates three times this year, if trade tensions continue to ratchet lower. It would be a sharp turnaround from just a few months ago, when worries were spiking that Trump’s trade war and four interest-rate increases by the Federal Reserve in 2018 could tip the economy into a recession.

Early next year, the economy should start to get a boost from the Fed’s three rate cuts since the summer, “and I would expect the market to see the recession narrative as overblown,” he said.

Until then, though, markets are still trading on every whiff of news about trade. Wednesday’s moves following the report of a possible “phase one” delay demonstrated that.

“Trade is a key issue but it’s difficult to gain an edge because no deal has been signed,” said Tom Hainlin, national investment strategist at U.S. Bank Wealth Management. “It’s proving to be challenging for investors.”

One thing more certain for investors has been the steady flow of better-than-expected profit reports from big companies. Over the last month, hundreds have told investors how much they made from July through September, and in most cases the declines were not as steep as analysts had forecast.

Benchmark U.S. crude lost 3 cents to $56.32 per barrel in electronic trading on the New York Mercantile Exchange. It gained 12 cents to close at $56.35 per barrel.