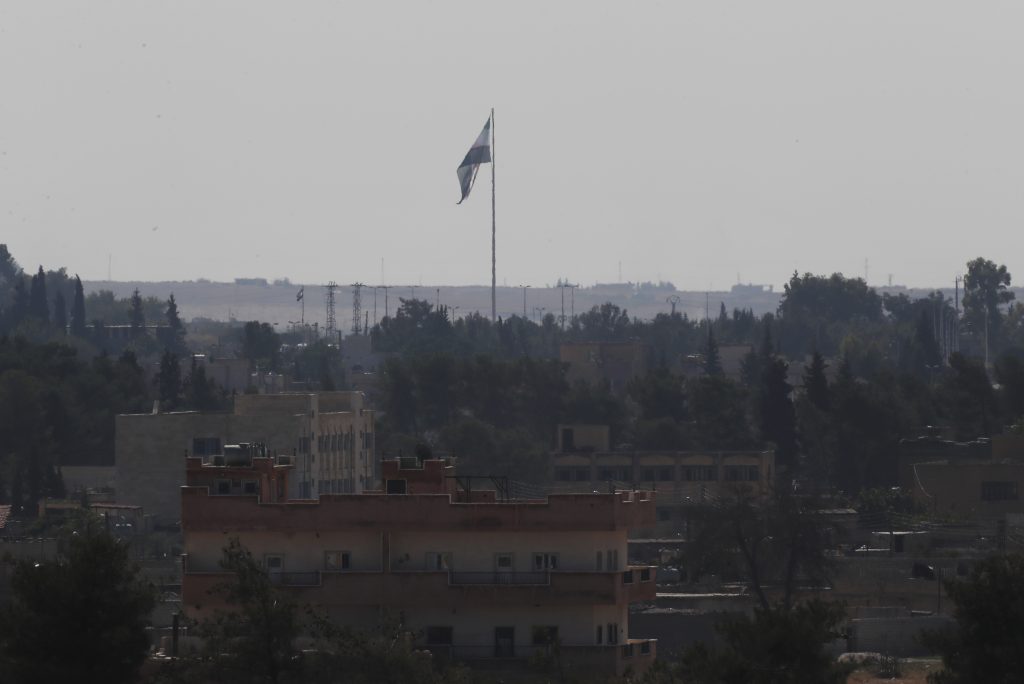 Russian military police began patrols on part of the Syrian border Wednesday, quickly moving to implement an accord with Turkey that divvies up control of northeastern Syria. The Kremlin told Kurdish fighters to pull back from the entire frontier or else face being “steamrolled” by Turkish forces.

Turkish President Recep Tayyip Erdogan echoed those warnings, saying his military would resume its offensive against Kurdish fighters if the new arrangements are not carried out.

Erdogan and Russian President Vladimir Putin reached an agreement Tuesday that would transform the map of northeast Syria, installing their forces along the border and filling the void left by the abrupt withdrawal of American troops. The Kurdish fighters, who once relied on the U.S. forces as protection from Turkey, were given a deadline of next Tuesday evening to pull back from border areas they have not already left.

Iraq, meanwhile, closed the door on the U.S. military’s attempt to keep the troops leaving Syria on its soil. Iraqi Defense Minister Najah al-Shammari told The Associated Press that those troops were only “transiting” Iraq and would leave within four weeks, heading either to Kuwait, Qatar or the United States.

Al-Shammari spoke after meeting U.S. Defense Secretary Mark Esper, who earlier this week had said the American forces from Syria would remain in Iraq to fight the Islamic State group. Iraqi’s military quickly said they did not have permission to do so.

The clumsy reversal underscored the blow to U.S. influence on the ground in the wake of President Donald Trump’s order for U.S. troops to leave Syria. Those forces were allied to the Kurdish-led fighters for five years in the long and bloody campaign that brought down the Islamic State group in Syria.

Now a significant swath of the territory they captured is being handed over to U.S. rivals, and the Kurds have been stung at being abandoned by their allies to face the Turkish invasion launched on Oct. 9.

The Kremlin pointedly referred to that abandonment as it told the Kurds to abide by the Russian-Turkish accord.

“The United States was the closest ally of the Kurds during the last few years, and in the end the U.S. ditched the Kurds and effectively betrayed them,” leaving them to fight the Turks, Kremlin spokesman Dmitry Peskov said, according to Russian newswires.

“It’s quite obvious that if the Kurdish units don’t withdraw with their weapons then Syrian border guards and Russian military police will have to step back. And the remaining Kurdish units will be steamrolled by the Turkish army,” he said.

Turkey considers the Kurdish fighters terrorists because of their links to Kurdish insurgents in Turkey. It has demanded they retreat from the entire border region, creating a “safe zone” where Turkey could also settle some of the 3.6 million Syrian refugees on its soil.

Ankara would gain that goal under the new accord with Moscow along with the agreement last week with the U.S. that put a cease-fire in place.

Kurdish forces completed withdrawing on Tuesday from a stretch of territory 120 kilometers (75 miles) wide along the border and 30 kilometers (19 miles) deep between the towns of Ras al-Ayn and Tal Abyad. That pullback, allowing Turkish-backed forces to take over, was required under the U.S.-Turkish accord.

The new agreement with Russia allows Turkey to keep sole control over that area. For the rest of the northeastern border, Russian and Syrian government forces will move in to ensure the Kurdish fighters leave. Then after the deadline runs out Tuesday, Turkish and Russian forces will jointly patrol a strip 10-kilometers (6 miles) deep along the border.

The Russian Defense Ministry said a convoy of military police had crossed the Euphrates River and deployed in the Syrian border town of Kobane.

“The military police will help protect the population, maintain order, patrol the designated areas and assist in the withdrawal of Kurdish units and their weapons 30 kilometers away from the border,” it said.

The Turkish military said it would not resume its offensive “at this stage” after the U.S.-brokered cease-fire expired Tuesday night. However, Foreign Minister Mevlut Cavusolgu said that Turkish forces would “neutralize” any Syrian Kurdish fighters they come across in areas that Turkey now controls.

President Erdogan said the attack would start again if the Kurdish pullback does not take place.

“Whether its our agreement with the United States or with Russia, if the promises given are not carried out, there will be no change concerning the steps we need to take,” he told journalists, according to the newspaper Hurriyet.

Erdogan said he had also asked Putin what would happen if the Syrian Kurdish fighters donned Syrian army uniforms and remained in the border area. Putin responded by saying that he would not let that happen, Erdogan said.

Cavusoglu, Turkey’s foreign minister, said the deal with Russia would continue until a lasting political solution for Syria is reached. He also said that Turkey agreed not to conduct joint patrols in the city of Qamishli at the eastern end of the border, because of Russian concerns they could lead to a confrontation between Turkish troops and Syrian government forces in the area.