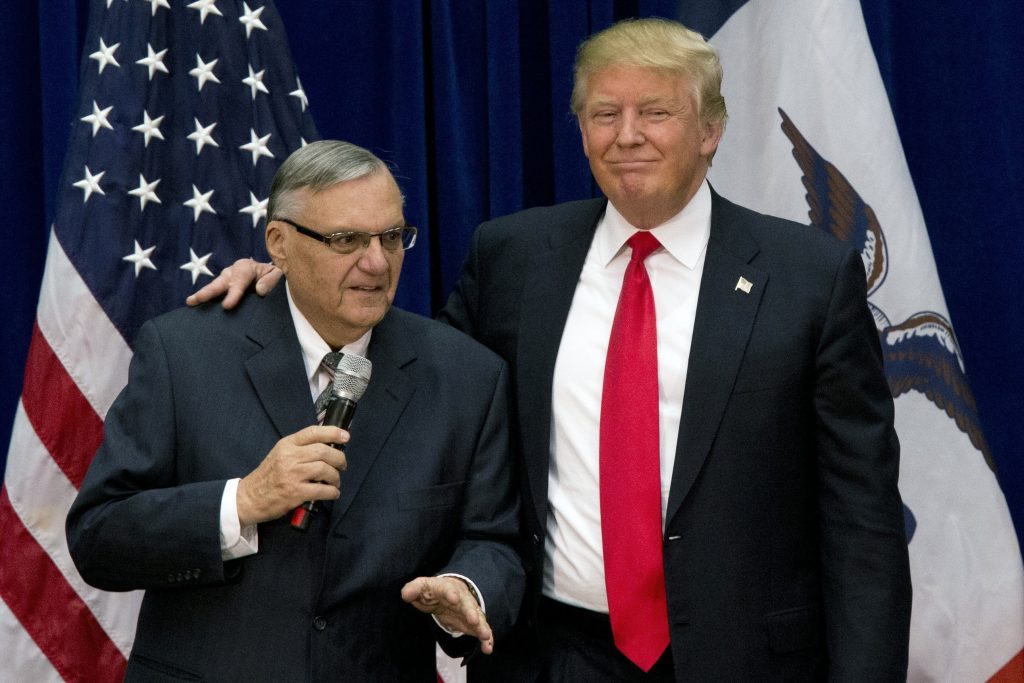 Joe Arpaio, once known as “America’s toughest sheriff,” isn’t content to be the first recipient of a criminal pardon from President Donald Trump.

The former top lawman in Maricopa County, Arizona, wants his conviction thrown out as well.

Arpaio made a name for himself targeting Latinos in the Phoenix area with traffic stops only on the suspicion they were undocumented immigrants. Two years ago a federal judge convicted him of criminal contempt of court for violating orders to stop the illegal detentions. Before he could be sentenced, however, Trump stepped in and granted a pardon.

Arpaio then asked to have conviction vacated, which the judge refused. On Wednesday, the former sheriff tried to convince the U.S. Court of Appeals in San Francisco that his conviction can’t stand because the pardon made the case moot and he never got a chance to appeal.

A three-member panel — two judges appointed by former President George W. Bush and one appointed by Trump — didn’t appear to be impressed with Arpaio’s position.

The case took an unusual turn after the Justice Department, which had started proceedings against Arpaio under the Obama administration and secured his conviction, said it wouldn’t fight Arpaio’s appeal. That prompted groups of civil rights organizations, legal scholars and members of Congress to ask the court to appoint an independent prosecutor as well as to challenge the underlying validity of Arpaio’s pardon.

Last month, a group headed by Harvard Law School Professor Laurence Tribe asked to participate in the hearing to challenge the constitutionality of the pardon. They argue that the pardon violated the separation of powers by undermining the ability of federal courts to protect individual rights and that it skirted the president’s duty to take care that laws are faithfully executed.

“The president has continued to exercise or threaten to exercise the pardon power in ways that undermine the rest of the constitution,” the group said.

The court denied their request to be heard, though, which left Christopher Caldwell, a Los Angeles lawyer with Boies Schiller Flexner who was appointed as special prosecutor, as the sole voice to argue that Arpaio’s conviction should stand.

Caldwell’s arguments didn’t dwell on whether the pardon itself is constitutional. Instead, Caldwell said in an April filing, Arpaio forfeited his right to appeal his conviction by lobbying for and accepting Trump’s pardon.

“Pardons mitigate punishment; they do not eliminate judgments,” Caldwell said. “If Arpaio wanted to contest the district court’s ruling, he was free to reject, or even delay acceptance of, the pardon and take his chances on appeal.”