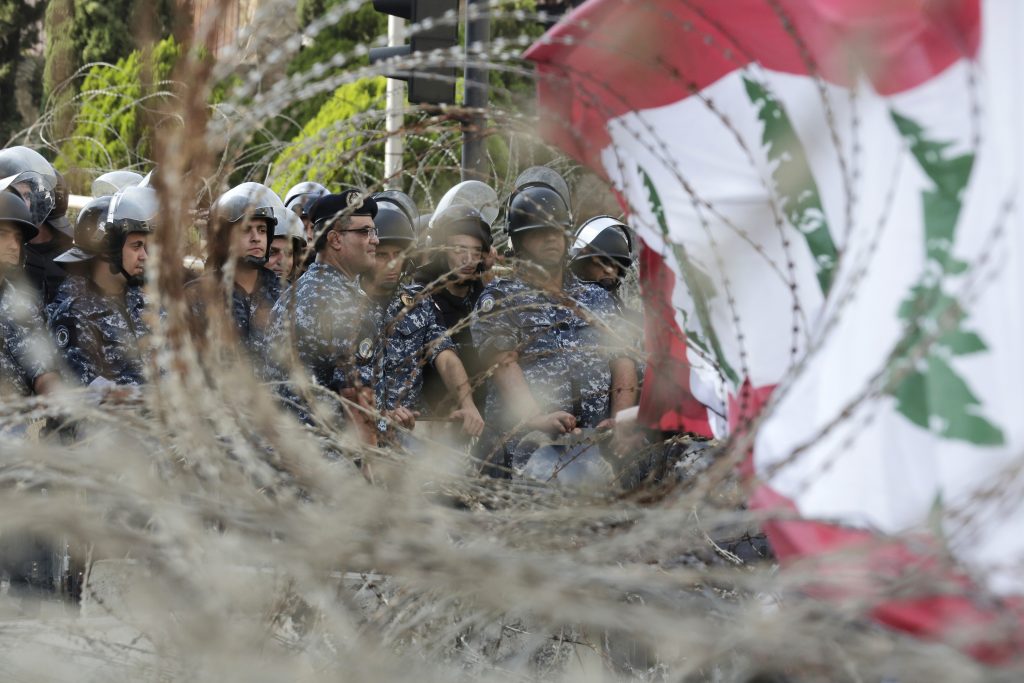 Lebanon’s influential Hezbollah leader said Saturday he is against the government’s resignation as nationwide protests gained momentum on their third day, calling for the removal of the country’s political elite.

Hassan Nasrallah said the current unity government should instead bring “a new spirit” to tackling the economic crisis fueling the demonstrations. His televised speech did nothing to soothe protesters in the streets, who included Nasrallah in their chants listing senior figures they blame for corruption and mismanagement.

The spontaneous protests are Lebanon’s largest in five years, spreading beyond Beirut. They are building on long-simmering anger at a ruling class that has divvied up power among themselves and amassed wealth for decades but has done little to fix a crumbling economy and dilapidated infrastructure.

On Saturday night, a Lebanese Christian leader asked his four ministers in the Cabinet to resign, saying he no longer believes the current national unity government headed by Premier Saad Hariri can steer the country out of the deepening economic crisis.

The resignation announced by Samir Geagea, who heads the right-wing Lebanese Forces Party, is another test for the government but does not collapse the 30-member Cabinet.

Earlier Saturday, thousands gathered in central Beirut chanting against all politicians for hours past nightfall. There were smaller protests in other towns and cities.

“Thieves, thieves,” they chanted and named almost every senior Lebanese politician, cursing them or demanding they step down. “All of them, and Nasrallah is one of them,” they shouted. The black-turbaned figure with a large Shiite following is normally a taboo, but outraged protesters have spared no one from their criticism, aiming at the entire ruling class.

Iranian-backed Hezbollah dominates the current Cabinet through its party and its allies. Both Nasrallah and Saad Hariri, who spoke on TV the night before, presented an image that they each support the protesters’ aims but that others in government are blocking a reform agenda.

Nasrallah said it would be “a waste of time” for the current national unity government to resign since the same political factions would have to haggle over forming a new one.

“If this government resigns, we won’t have a new one for a year or two,” he said in a televised speech, pointing to perpetual political divisions that delayed forming the current Cabinet for nine months. He said the deeply-indebted economy doesn’t have the luxury of time.

“Let this government continue but with a new spirit and new way of working and let it learn its lessons from the last two days of popular outburst,” said Nasrallah, denouncing political rivals, without naming any, who shirk their responsibility amid the crisis.

Protests erupted after the government proposed new taxes criticized for hitting low income groups the hardest. The taxes included a flat $6 monthly fee for using the free voice and call services of Whatsapp. Public anger had already been growing for months over an austerity budget that hiking multiple taxes and curbed government pensions and employment benefits at a time when many struggle with high prices and unemployment.

The nation came to a standstill amid the largescale protests, which have brought people from across the sectarian and religious lines that define the country.

On Saturday, protesters carrying Lebanese flags massed at a security barricade piled with barbed wire outside the government’s offices. “The people want to bring down the regime,” was the uniting refrain.

Mia Oueini, a 15-year-old in the crowd, said politicians should bear the responsibility of the protests.

“This is not our fault. They are the thieves,” she said, pulling at a gas mask she had over her mouth in case of police tear gas. “My message (to them) is …Please stop lying, stop stealing and just give us what we need.”

In his speech Friday night, Hariri gave his partners in the government a 72-hour ultimatum to come up with convincing solutions to the economic crisis. On Saturday, Hariri said he was meeting Cabinet ministers to “reach what serves the Lebanese.”

Amnesty International called on police to stop use of “excessive force,” pointing to the large amount of tear gas as well as beatings and harassment at gunpoint of protesters.

On Saturday, Lebanese Al-Jadeed TV said protests in the southern city of Tyre turned violent when supporters of longtime Parliament Speaker Nabih Berri attacked protesters who named him among those corrupt officials who should step down. His party said it is investigating the violence.

Saudi Arabia, the United Arab Emirates and Bahrain called on their citizens to leave Lebanon amid the unrest, underscoring the risk of the unrest to an economy already on the verge of collapse.

The small Arab country on the Mediterranean has the third-highest debt level in the world, currently standing at about $86 billion, or 150% of its gross domestic product.