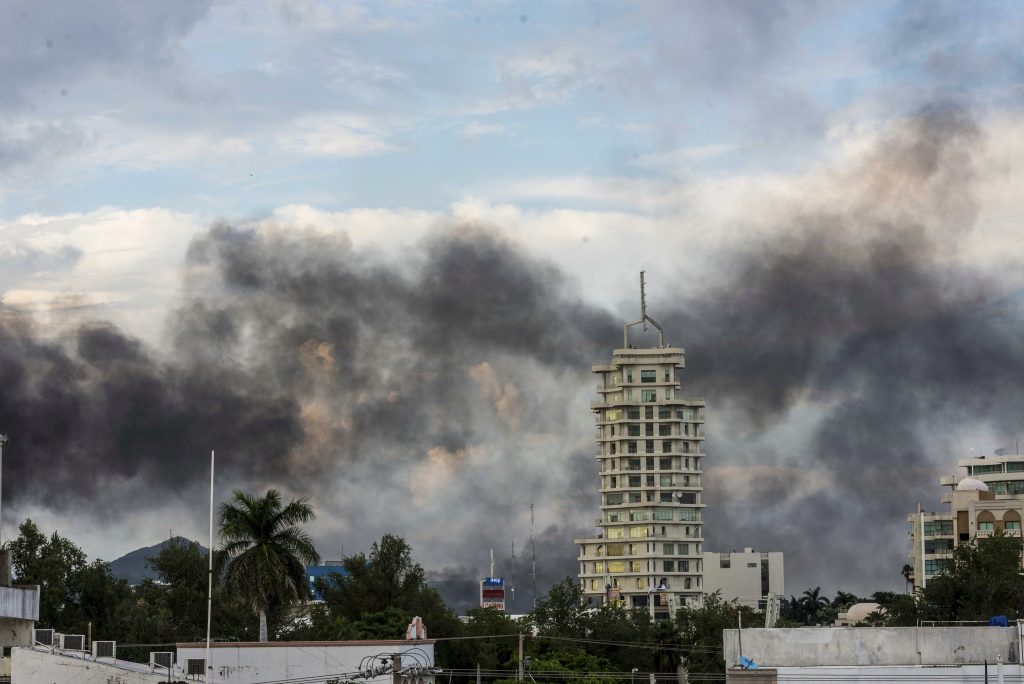 Mexican security forces backed off an attempt to capture a son of imprisoned drug lord Joaquin “El Chapo” Guzman after finding themselves outgunned in a ferocious shootout with cartel enforcers that left at least eight people dead and more than 20 wounded, authorities said Friday.

The gun battle Thursday paralyzed the capital of Mexico’s Sinaloa state and left the streets littered with burning vehicles.

Five attackers, a member of the National Guard, a civilian and a prisoner were killed, Mexican Defense Secretary Luís Cresencio Sandoval said.

Sinaloa Public Security Secretary Cristóbal Castañeda said earlier that 21 people were wounded and that 27 inmates escaped from a prison.

Sandoval said the forces were on an operation to arrest Ovidio Guzmán López, a son of the convicted Sinaloa cartel boss. The younger Guzman was wanted for extradition to the U.S.

That sequence of events clashed with an initial account by federal Security Secretary Alfonso Durazo, who said 30 members of the National Guard and army were on patrol in Culiacan when they were fired on from a house and found the younger Guzmán inside.

Heavily armed gunmen in greater force then surrounded the house, and authorities decided to suspend the operation, Durazo said. Durazo told Televisa that security forces had entered the house but left without Guzman.

“With the goal of safeguarding the well-being and tranquility of Culiacan society, officials in the security cabinet decided to suspend the actions,” Durazo said.

President Andrés Manuel López Obrador said he supported the decision to pull back.

“The capture of one criminal cannot be worth more than the lives of people,” López Obrador said, calling the response to the operation “very violent” and saying many lives were put at risk.

“This decision was made to protect citizens. … You cannot fight fire with fire,” he added. “We do not want deaths. We do not want war.”

José Luis González Meza, a lawyer for El Chapo’s family, told The Associated Press that Guzmán’s family reported “Ovidio is alive and free” but that he had no more details.

The elder Guzman is serving a life sentence in the U.S. after being convicted last February of industrial-scale drug trafficking.

Ovidio is not one of the drug lord’s best-known sons. Iván Archivaldo Guzmán and Jesús Alfredo Guzmán are known as “Los Chapitos,” or “the little Chapos,” and are believed to be running their father’s cartel, together with Ismael “El Mayo” Zambada.

But Ovidio Guzmán was indicted in 2018 in Washington, along with a fourth brother, on charges of trafficking in illegal substances.

After Ovidio Guzmán was located, Culiacan exploded in violence, with civilians in trucks roaring through the city’s center, shooting what appeared to be .50-caliber sniper rifles and machine guns.

Videos on social media showed a scene resembling a war zone, with gunmen, some in black ski masks, riding in the back of trucks, firing mounted machine guns as vehicles burned. People could be seen running for cover as gunfire rattled around them. Motorists drove in reverse, frantically trying to get away.

“Nothing is working,” said Ricardo González, a worker in the state’s congress who shut himself up in his house after picking up his 15-year-old son from school. “There is a psychosis. No one knows what is going on, but everyone is afraid, and they have told us to not come in to work tomorrow.”