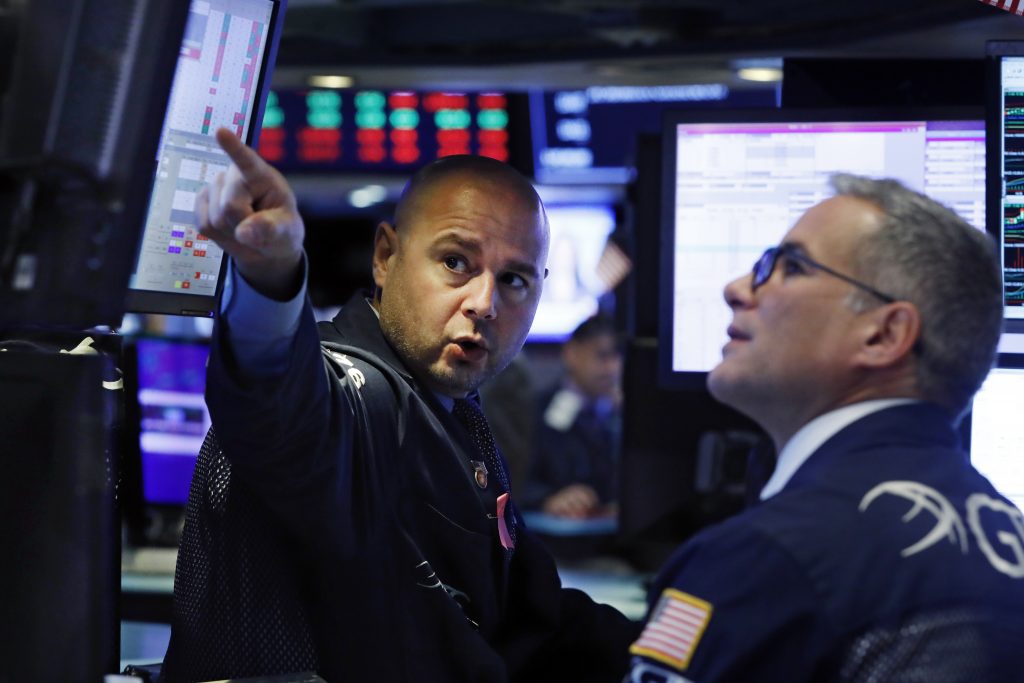 A day of choppy trading on Wall Street ended Monday with stocks broadly lower as the market extended its losing streak into a fourth week.

The market is coming off a three-week skid following a mostly discouraging batch of economic data that stoked investors’ worries that a slowdown in U.S. economic growth could worsen.

The combination of uncertainty over the costly trade war between the U.S. and China, and the impeachment inquiry drama unfolding in Washington, is likely to continue to drag on the economy and weigh on markets, said Tony Roth, chief investment officer at Wilmington Trust.

“And that’s why the markets are treading water right now, waiting to see if another shoe drops,” Roth said.

The benchmark S&P 500 index began the day lower, picked up some gains around midday and then veered back into the red by late afternoon.

The wobbly day in the market reflects the cautious approach that investors are taking as they try to gauge how the economy and corporate profits will fare amid the lingering trade war and political uncertainty in Washington.

Last week, the S&P 500 posted its first back-to-back losses of 1% this year as surprisingly weak numbers in surveys of manufacturing and service industries showed the U.S.-China trade war is threatening U.S. economic growth.

Some of those fears were allayed on Friday when a government jobs report showed that employers are still adding jobs at a healthy clip and that the national unemployment rate dropped to a five-decade low.

Still, last week marked the third weekly loss in a row for the broader market as the trade war takes its toll on confidence. Markets have been whipsawed for months by the ups and downs in the dispute.

“Labor has held up fairly OK, but we’re definitely decelerating from an economic standpoint, so corporate earnings may reflect that negatively,” Roth said. “The biggest drivers of the market are going to be who controls policy in Washington and what the specifics are around the Chinese trade situation.”

Envoys from Washington and Beijing are scheduled to meet later this week in their latest bid to put an end to the dispute that is stunting global economic growth and spooking the stock market.

Discovery led the gains in the communication services sector. The stock rose 1.4%.

Fox inched up 0.1% after the company settled a dispute with Dish Network over carriage of Fox’s local TV stations and cable sports networks. Dish pulled the broadcast network from 17 markets in September. Shares in Dish gained 0.2%.

ConocoPhillips climbed 2.1% after the energy company raised its quarterly dividend by 38% and will buy back $3 billion of its stock in 2020.

General Motors fell 0.5%. The stock has lost nearly 10% of its value since contract negotiations with the now striking United Auto Workers started to falter. The situation has taken another bad turn as negotiations hit a snag over product commitments for U.S. factories.

Workers were warned by United Auto Workers vice president Terry Dittes on September 6 that bargaining was moving slowly. They moved to picket lines on September 16, crippling the company’s factories and accelerating stock losses.

Despite the labor issues, General Motor’s stock is still up 3.8% for the year, though that is far behind competitor Ford’s 13.7% annual gain.

Major stock indexes in Europe closed broadly higher. Stocks in Asia ended mixed. Chinese markets are due to reopen on Tuesday after a weeklong break.