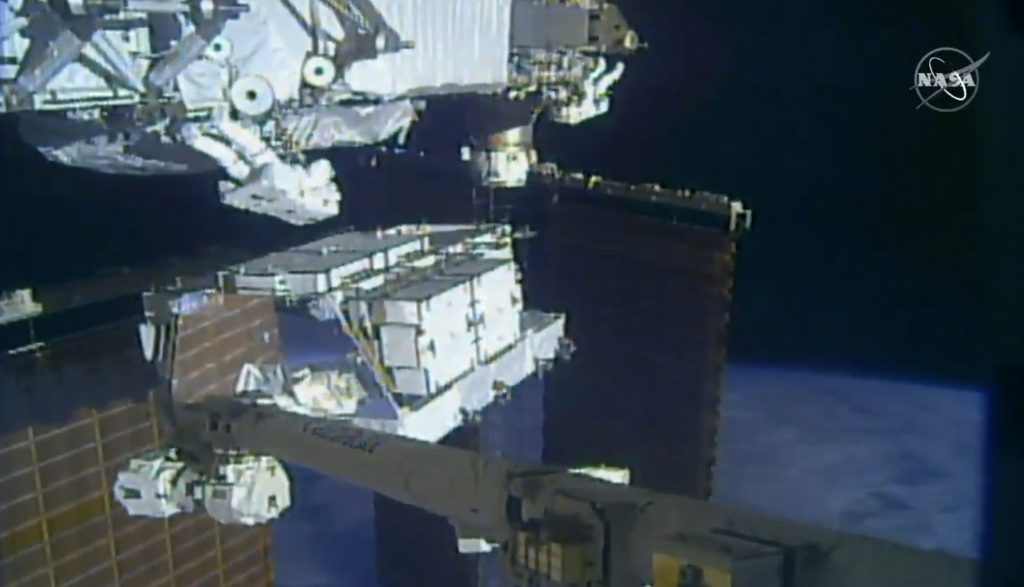 Astronauts hustled through the first of five spacewalks to replace old batteries at the International Space Station on Sunday.

Christina Koch and Andrew Morgan removed three old batteries and installed two new ones delivered just a week ago, getting a jump on future work. These new lithium-ion batteries are so powerful that only one is needed for every two old ones, which are original to the orbiting lab.

“Awesome work today. We have made great progress,” Mission Control radioed. Koch replied: “It has been a wonderful day … we look forward to the rest of the series.”

Koch and Morgan will venture back out Friday for more battery work 250 miles up.

These latest battery swaps are especially difficult given the extreme location on the station’s sprawling frame. It’s too far for the 58-foot robot arm to reach, forcing astronauts to lug the batteries back and forth themselves. That’s why so many spacewalks are needed this time to replace 12 old nickel-hydrogen batteries with six new lithium-ion versions.

Koch and Morgan took turns holding each battery as they made their way, inchworm style, along the structure. The batteries were so bulky that it blocked the spacewalkers’ views of one another, prompting constant updates. “I am right next to you,” Koch said at one point. “I have the battery,” Morgan replied. Then Koch had the battery, and so it went until the job was complete.

They ended up plugging in two new batteries, one more than anticipated, and removing an extra old one.

NASA plans to wrap up the five battery spacewalks this month, followed by a Russian spacewalk. Then five more U.S.-Italian spacewalks will be conducted in November and December to fix a key science instrument. NASA is calling it a “spacewalk bonanza.”

This unusual crush of spacewalks will feature the first all-female spacewalk — by Koch and Jessica Meir — later this month.

Koch is two-thirds of the way through a more than 300-day mission. It will be the longest single spaceflight by a woman.