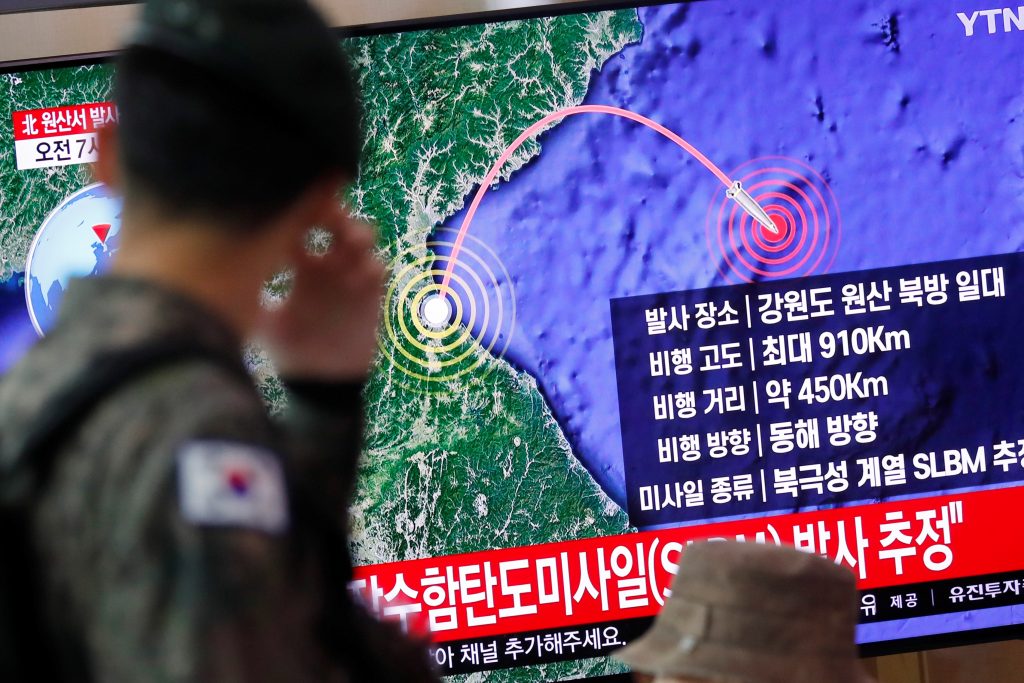 North Korea fired at least one missile off its east coast on Wednesday that South Korea said may have been launched from a submarine, a day after it announced the resumption of talks with the United States aimed at ending its nuclear program.

Japanese Prime Minister Shinzo Abe condemned the launch of what he said were two ballistic missiles, one of which fell in the waters of Japan’s Exclusive Economic Zone (EEZ), saying it was a violation of United Nations Security Council resolutions.

The launch was likely a reminder by the North, which rejects the U.N. resolutions banning the use of ballistic missile technology as an infringement on its right to self-defense, and of its weapons capability ahead of the talks with Washington, analysts said.

Talks aimed at dismantling North Korea’s nuclear and missile programs have been stalled since a second summit between U.S. President Donald Trump and North Korean leader Kim Jong Un in Vietnam in February ended without a deal.

South Korea’s military said it had detected the launch of one missile that flew 450 km (280 miles) and reached an altitude of 910 km (565 miles). It was likely a Pukguksong-class weapon, as the North’s earlier submarine-launched ballistic missiles (SLBM) were known, that is under development.

The National Security Council in Seoul expressed “strong concern” over the launch of what it said may have been an SLBM, according to a statement issued by the presidential Blue House, that came just a day after the announcement of working-level nuclear talks.

South Korea’s military said the missile was launched from around Wonsan, the site of one of North Korea’s military bases on the east coast, towards the sea. There was no immediate explanation for the discrepancy with Japan’s assessment that two missiles had been fired.

North Korea had been developing SLBM technology before it suspended long-range missile and nuclear tests and began talks with the United States that led to the first summit between Kim and Trump in Singapore in June 2018.

Japan’s Chief Cabinet Secretary Yoshihide Suga said it appeared two missiles were launched within minutes of each other and that the second fell in Japan’s EEZ at 7:27 a.m. local time.

A senior U.S. administration official, who spoke on condition of anonymity, said, “We are aware of reports of a possible North Korean missile launch. We are continuing to monitor the situation and consulting closely with our allies in the region.”

The latest launch was the ninth since Trump and Kim met at the Demilitarized Zone border between the two Koreas in June and pledged to reopen working-level talks within weeks.

Hours before Wednesday’s launch, North Korean Vice Foreign Minister Choe Son Hui said in a statement the talks would be held on Saturday in a development that could potentially break what had been months of stalemate.

North Korea’s previous missile launch was on Sept. 10, also hours after Choe had expressed Pyongyang’s willingness for talks with the United States.

“It seems North Korea wants to make its negotiating position quite clear before talks even begin,” said Harry Kazianis, senior director of Korean studies from the Center for the National Interest.

“Pyongyang seems set to push Washington to back off from past demands of full denuclearization for what are only promises of sanctions relief,” he said.

Trump has played down North Korea’s recent series of short-range launches, saying in September the United States and North Korea “didn’t have an agreement on short-range missiles” and that many countries test such weapons.

North Korea continued its attack against South Korea in a commentary in its official newspaper on Wednesday, criticizing its joint military drills with the United States as “unchangingly aggressive.”

“The root cause of the stalemate in the North-South relations lies, in short, in the South Korean authorities’ treacherous behavior,” the Rodong Sinmun commentary said.

Lee Sung-yoon, Professor of Korean Studies at The Fletcher School at Tufts University, said North Korea had “recycled its carrot-and-stick strategy” with the United States many times in the past with success.