Dallas Cop Gets 10 Years in Prison for Killing Her Neighbor

A white Dallas police officer was sentenced Wednesday to 10 years in prison for killing her black neighbor in his apartment, which she said she mistook for her own unit one floor below.

Amber Guyger didn’t appear to show much reaction, at least from the angle of a live camera stream, as the judge read the jury’s sentence. It came a day after the jury convicted her of murder in the September 2018 killing of Botham Jean.

Guyger’s sentence was met with boos and jeers by a crowd gathered outside of the courtroom, with one woman saying, “It’s a slap in the face.”

But that was a very different tenor to the post-verdict scene inside the courtroom, where Jean’s brother, Brandt Jean, was allowed to address Guyger directly from the witness stand.

“I love you as a person. I don’t wish anything bad on you,” he said to the 31-year-old Guyger.

As Jean’s family walked out of the courtroom, the group that had been outside began a chant of, “No justice! No peace!” Two young black women hugged each other and cried.

Prosecutors had asked jurors to sentence Guyger to at least 28 years, which is how old Jean would have been if he were still alive.

The jury could have sentenced the former officer to up to life in prison or as little as two years. 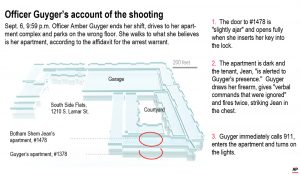 The basic facts of the unusual shooting were not in dispute throughout the trial. Guyger, returning from a long shift that night, entered Jean’s fourth-floor apartment and shot him. He had been eating a bowl of ice cream before she fired.

Guyger said she parked on the wrong floor and mistook Jean’s apartment for her own, which was directly below his, and mistook him for a burglar. In the frantic 911 call played repeatedly during the trial, Guyger said “I thought it was my apartment” nearly 20 times. Her lawyers argued that the identical physical appearance of the apartment complex from floor to floor frequently led to tenants going to the wrong apartments.

But prosecutors questioned how Guyger could have missed numerous signs that she was in the wrong place. They also asked why she didn’t call for backup instead of walking into the apartment if she thought she was being burglarized.

Guyger, who had spent four years on the force before the killing, took the rare step of testifying in her own defense during her trial, tearfully expressing regret for shooting Jean but saying she had believed her life was in danger when she pulled the trigger.

Prosecutors also argued that Guyger did little to help Jean even after realizing her mistake, calling the 911 emergency phone number for an ambulance but not administering first aid.

They also showed the jury several text messages that painted Guyger as racist.

Guyger wrote in one January 2018 message that she would like to use pepper spray on the crowd at a Martin Luther King Jr. parade in Dallas, while in another she wrote that her black police colleagues “just have a different way of working and it shows.”

Guyger also shared a post on social media that stated: “I wear all black to remind you not to mess with me, because I’m already dressed for your funeral.”

During the trial, Guyger’s defense attorney said she was “on autopilot” after a long work day, when she mistakenly parked on the wrong floor in the garage and was able to enter Jean’s apartment because he had left the door slightly ajar.

“I’m so sorry, I’m so sorry. I have to live with this every single day,” Guyger told the jury of eight women and four men.

In cross-examination, Assistant District Attorney Jason Hermus asked her, “When you shot him twice, you intended to kill him, didn’t you?”

“I did,” Guyger responded, in a calm voice.

The shooting drew widespread attention because of the strange circumstances and because it was one in a string of shootings of unarmed black men by white police officers.

One of the Jean family lawyers hailed the verdict as “a victory for black people in America” after it was handed down Tuesday.

The jury was largely made up of women and people of color.