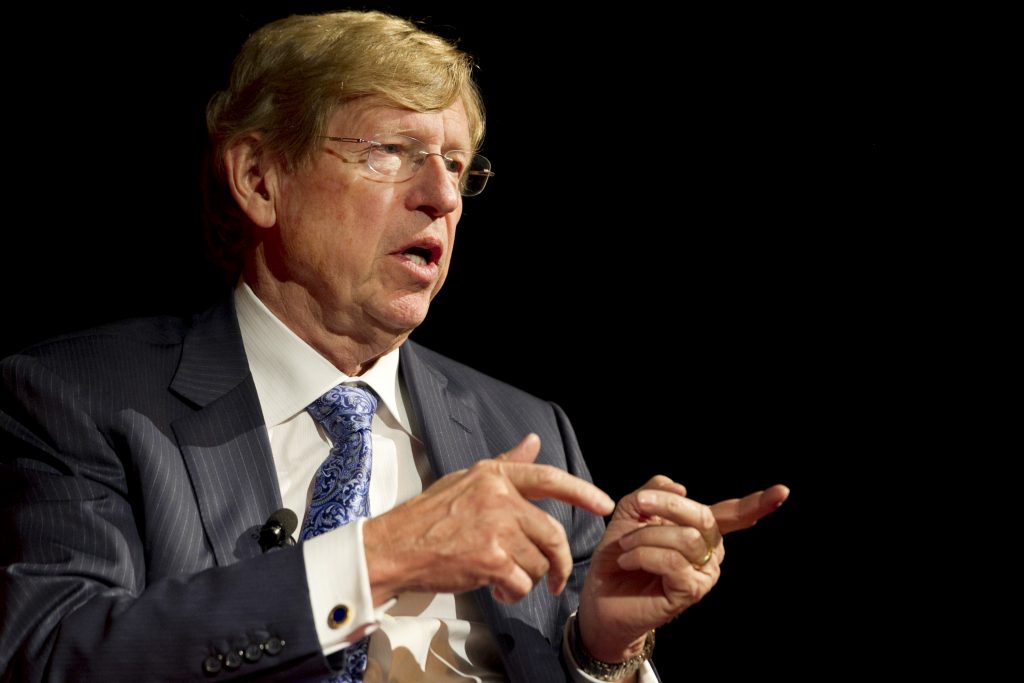 The organizations challenging the Trump administration’s attempt to end protections for undocumented immigrants brought to the United States as children have picked Theodore Olson, a Republican former solicitor general and lawyer long associated with conservative causes, to argue their case before the Supreme Court.

Olson said Thursday it was a bit of counterprogramming: “We’re going to have to win over some conservative members of the court, and so someone who has a background in separation of powers, executive power, on the conservative side of the political spectrum, might help.”

But Olson, who represented President George W. Bush and then served as his solicitor general, remains mostly associated with the political right. President Donald Trump twice tried to hire him as his personal lawyer.

The Supreme Court on Nov. 12 is scheduled to consider Trump’s plan to eliminate the Deferred Action for Childhood Arrivals (DACA) program, which began in 2012 by a proclamation by President Barack Obama after Congress failed to pass immigration reform.

DACA encouraged those who had been brought to the United States as children, and met requirements for abiding by the law and length of time in the country, to apply for protection from deportation. The application is renewable, and about 700,000 people are covered by the program, which also allows them to apply for work authorization.

Trump has been inconsistent on the matter, alternately supportive of the so-called “Dreamers” and insistent that DACA is illegal. He has tweeted that the Supreme Court “must” agree and shut down the program so that the executive and legislative branches can negotiate a path forward.

The Trump administration moved to scuttle the program in 2017 after Texas and other states threatened to sue to force its end. Then-Attorney General Jeff Sessions advised the Department of Homeland Security that the program was probably unlawful and that, legally, it could not be defended.

Sessions based that decision on a ruling by the U.S. Court of Appeals for the 5th Circuit, which said that another Obama program protecting immigrants – for undocumented parents of children with legal status – was beyond the president’s constitutional powers. The Supreme Court deadlocked 4 to 4 in 2016 when considering the issue.

But the legality of DACA has never been determined, and judges who have considered the Trump administration’s actions to dissolve it say it is different. They said that the Department of Homeland Security’s justification for ending DACA must be based on more than just a belief about its legal underpinnings.

The courts have allowed those in the program to renew their applications while the legal battle continues.

Solicitor General Noel Francisco, representing the administration, told the Supreme Court that the executive branch has the authority “to revoke a discretionary policy of non-enforcement that is sanctioning an ongoing violation of federal immigration law by nearly 700,000 aliens.”

Olson, whose law firm already was representing some individual DACA recipients, said he will argue that “people have altered their lives” because of DACA, and that its revocation would actually be a new enforcement regime that must be accompanied by reasoning.

“The executive can’t just come out with a policy that affects 700,000 people and their employers and their families and their communities” and then justify it simply by saying “because we want to do it,” Olson said.

Olson will be representing individuals in the program, and others such as universities, California regents, unions and cities and counties. He has asked the court for expanded briefing time, which would be split with California Solicitor General Michael Mongan, who would represent states that want the program to remain in place.

Olson laughed when asked if he would still be considered “conservative” after his latest cause.

DACA recipients, he said, have “been Americans all their lives for all intents and purposes. And we’re going to put them in peril, deprive them of the security the rest of us have? That doesn’t seem to me a position that conservatives would want to be espousing.”