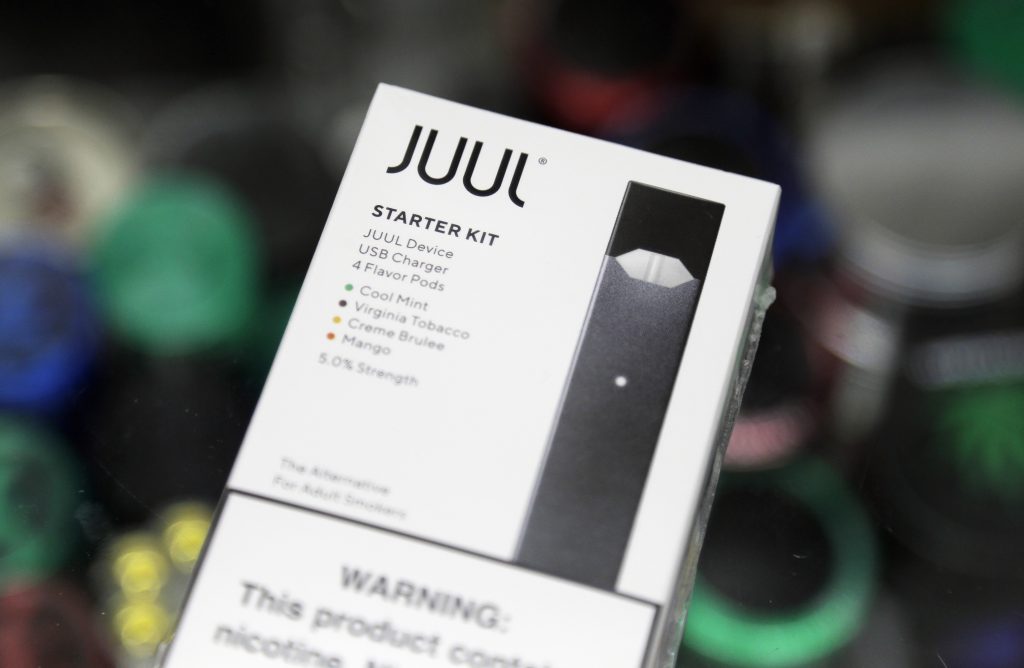 The nation’s largest electronic cigarette maker will stop advertising its devices in the U.S. and replace its chief executive as mysterious breathing illnesses and an explosion in teen vaping have triggered efforts to crack down on the largely unregulated industry.

Juul Labs Inc. and other e-cigarette makers are fighting to survive as they face backlash from two public health debacles. Federal and state officials have seized on the recent outbreak of lung illnesses — including 10 reported deaths — to push through restrictions designed to curb underage vaping.

None of the major e-cigarette brands have been tied to the ailments, including Juul, which said it won’t fight a Trump administration proposal for a sweeping ban on e-cigarette flavors that can appeal to teens.

Michigan, New York and Rhode Island banned vaping flavors this month, while Massachusetts said it will stop sales of all vaping products for four months, the first such step in the country.

“I think this rush to judgment is extraordinary, and we might be looking at the demise of vaping,” said Kenneth Warner, professor emeritus at University of Michigan’s school of public health.

Warner and some other experts believe vaping has the potential to dramatically reduce the deadly toll of traditional cigarettes among adult smokers. But he said Juul made “enormous mistakes” in its early advertising campaigns, which featured bright colors and youth-oriented catchphrases.

E-cigarettes have been largely unregulated since arriving in the U.S. in 2007. The Food and Drug Administration has set next May as a deadline for manufacturers to submit their products for review.

Exempt from restrictions on traditional tobacco marketing, Juul until now has advertised its e-cigarettes in print, TV, radio and online. It’s also replacing its CEO with a senior executive from Altria, the maker of Marlboro cigarettes that paid $13 billion for a 35% stake in Juul in December.

The new chief, K.C. Crosthwaite, said in a statement that Juul has long focused on providing adult smokers with alternatives but recognized that there are “unacceptable levels of youth usage and eroding public confidence in our industry.”

Health experts generally consider e-cigarettes less harmful than traditional cigarettes because they don’t contain all the cancer-causing byproducts of burning tobacco. But there’s virtually no long-term research on the health effects of the vapor produced when e-cigarettes heat a liquid with nicotine.

Health officials are investigating hundreds of recent cases of the lung illness. Many patients said they vaped THC, with bootleg devices, but officials have not yet implicated any common product or ingredient.

Meanwhile, underage vaping has reached epidemic levels, health officials say. In a government survey, more than 1 in 4 high school students reported using e-cigarettes in the previous month despite federal law banning sales to those under 18.

“I think conflating the two is risky because it might force us down the wrong path,” said Gottlieb, who stepped down in April.

“Juul’s announcement today is aimed at repairing its image and protecting its profits, not at solving this crisis,” said Matthew Myers, president of the Campaign for Tobacco-Free Kids. “Policymakers must stand up to Juul and protect our kids by banning flavored e-cigarettes.”

Juul devices went on sale in 2015, and the company quickly propelled itself to the top of the market with a combination of high-nicotine pods, dessert and fruit flavors, and viral marketing. The San Francisco company now controls roughly 70% of the U.S. e-cigarette market.

In the last year, Juul tried to reposition itself as a brand for middle-age smokers looking to wean themselves off cigarettes. But the FDA warned the company this month that its product hasn’t yet been approved to help smokers quit.

Juul has tried to head off a crackdown with a series of voluntary steps, including halting retail sales of several flavors and shutting down its social media presence. But political pressure has only increased.

“We must strive to work with regulators, policymakers and other stakeholders, and earn the trust of the societies in which we operate,” Crosthwaite said in a statement.

Altria and Philip Morris International said Wednesday that they were calling off merger talks a month after floating a deal that would have created the world’s largest tobacco company.

Altria’s stake in Juul was considered a key factor in the deal, which would have given the e-cigarette maker access to Philip Morris’ global network and resources.

Tim Hubbard of University of Notre Dame said Juul has “failed spectacularly” in managing the public perception of its e-cigarettes.

“Bringing in a traditional tobacco executive who knows how to market and manage government relationships with deadly products matches the firm’s needs,” Hubbard said in an email.