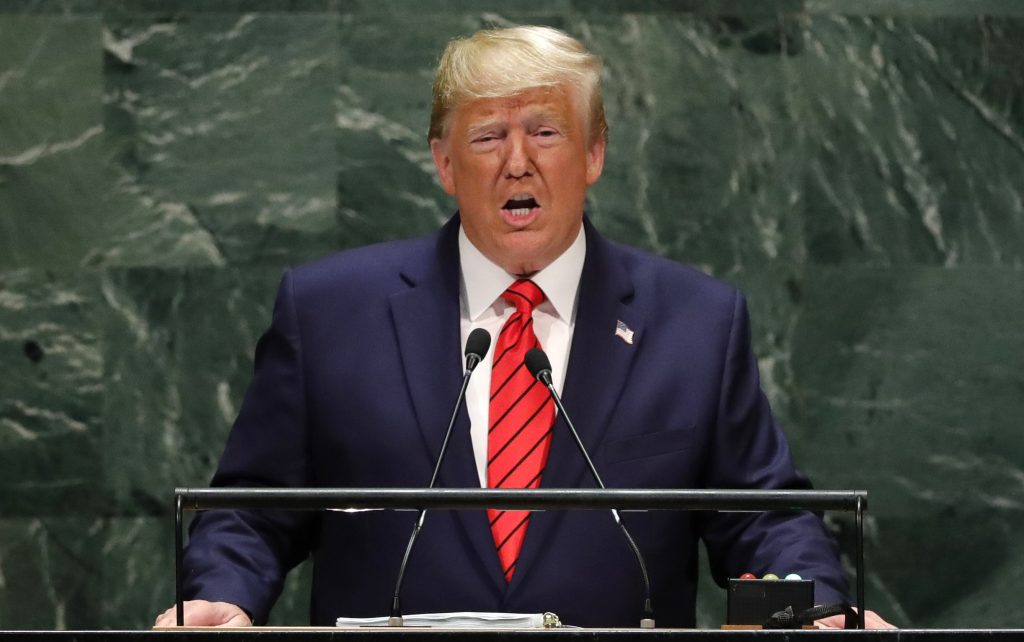 President Donald Trump took center stage at the U.N. General Assembly on Tuesday to deliver a strong defense of nationalism while exhorting the world to act against Iran’s “bloodlust” and rising aggression.

The president called on the global leaders seated before him to join the U.S. in further isolating Tehran, pushing them to use economic sanctions to pressure Iran to give up its nuclear program and stop attacks that are rattling the Middle East.

“Not only is Iran the world’s largest state sponsor of terrorism, but Iran’s leaders are fueling the tragic wars in both Syria and Yemen,” President Trump said. “All nations have a duty to act. No responsible government should subsidize Iran’s bloodlust.”

Focusing on the United States’ self-interests, Trump said the nation’s security was jeopardized by the threat posed by Iran and warned Tehran to stop its aggression toward Washington’s allies in the Middle East.

“One of the greatest threats facing peace-loving nations today is the repressive regime in Iran. The regime’s record of death and destruction is well-known to us all,” said Trump. “As long as Iran’s menacing behavior continues, sanctions will not be lifted. They will be tightened.

“The United States does not seek conflict with any other nation,” Trump added. “We desire peace, cooperation, and mutual gain with all. But I will never fail to defend America’s interests.”

As speculation mounted that Trump could meet in New York with Iranian President Hassan Rouhani, the president raised the possibility of a diplomatic breakthrough, saying, “The United States has never believed in permanent enemies. We want partners, not adversaries.”

Trump did not mention his administration’s long-awaited peace plan for the Middle East, now expected to be released after Israel forms its new government.

Foreign Minister Yisrael Katz thanked Trump for his comments in a tweet:

“On behalf of the people of Israel and myself I would like to thank President Donald Trump for his speech at the UN General Assembly. As Mr. Trump just said, all nations have a duty to act against Iran and the world must stop Iran from building a nuclear weapon. Thank you Mr. President!”

But while Trump commanded the global stage, his speech was shadowed by momentum building in Washington among Democrats considering impeaching him.

Such a move appeared to gather stream after it was revealed that Trump ordered his staff to freeze nearly $400 million in aid to Ukraine a few days before a phone call in which he pressured the Eastern European nation’s leader to investigate the family of political rival Joe Biden.

It was a split-screen moment for Trump, who used the global spotlight to push his “America First,” go-it-alone foreign policy approach even as Democrats debated his political future in Washington. The president implored the world’s leaders to prioritize their own nations, stressing the benefits of strong borders and one-on-one trade deals while rejecting sweeping transnational organizations and alliances.

Trump’s speech was greeted with tepid applause from the world leaders. In sharp contrast to his fiery rally speeches, Trump on Tuesday adopted a more somber demeanor. He grasped the podium throughout his address, his voice at times so soft it would have been hard to hear without microphones. For an extended stretch, Commerce Secretary Wilbur Ross sat in the audience with his eyes closed, appearing asleep.

Though denouncing Iran’s aggression, Trump did not explicitly blame Tehran for recent strikes against oil facilities in Saudi Arabia. Iran has denied orchestrating the attack, which Secretary of State Mike Pompeo has deemed “an act of war.”

Britain, France and Germany joined the United States on Monday in blaming Iran for the attacks. Iranian Foreign Minister Mohammad Javad Zarif, for his part, pointed to claims of responsibility by Yemeni rebels and insisted: “If Iran were behind this attack, nothing would have been left of this refinery.”

President Trump urged Tehran to follow the example set by North Korea’s Kim Jong Un, even though the autocrat continues to hold a tight grip on his nuclear weapons.

Trump, who has met with Kim for a pair of summits and a historic step into North Korea, said this week that another meeting “could happen soon.” He provided few details, and it wasn’t clear what officials were doing behind the scenes to set up a meeting to break the diplomatic impasse over the North’s development of nuclear-armed missiles targeting the U.S. mainland.

“While anyone can make war, only the most courageous can choose peace,” said Trump, praising Kim.

He also delivered a bellicose warning to Venezuela. He denounced the government of Nicolás Maduro and declared that he awaited the day “when Venezuela will be free and when liberty will prevail throughout this hemisphere.” He calls socialism “the wrecker of nations” and “destroyer of societies.”

His call came just a day after the United States and more than a dozen Latin American countries agreed to investigate and arrest associates and senior officials of Maduro’s government who are suspected of crimes like drug trafficking, money laundering and financing terrorism. Trump also, as he has done before, obliquely linked the crisis in Venezuela to the leftist policies of his domestic political opponents, vowing that the United States would “never be a socialist nation.”

As always, the political realities at home were never far from Trump’s mind.

He underscored the need for a fair-trade deal with China, threatening more tariffs even as the ongoing dispute has rattled markets and endangered the domestic economic success on which Trump has banked his reelection hopes. And linking sovereignty to strong borders, Trump touted a hawkish immigration worldview popular with his conservative political base while chastising other governments for not doing their part.

“One of our most critical challenges is illegal immigration,” said Trump. He decried “radical activists” who “encourage illegal migration,” declaring that their policies are “not just. Your policies are cruel and evil.”

But Trump made no mention of the centerpiece issue of this year’s General Assembly: climate change. On Monday, he made only a 15-minute cameo at a global climate change meeting and later mocked Swedish 16-year-old activist Greta Thunberg, who had scolded the audience at the climate summit.

Trump tweeted: “She seems like a very happy young girl looking forward to a bright and wonderful future. So nice to see!”

This was Trump’s third speech to the world body. In his 2017 speech, he dubbed Kim “Little Rocket Man” and denounced North Korea from the podium as he did to Iran this year. In last year’s speech, his praise for his own administration’s accomplishments drew laughs from the assembled leaders.