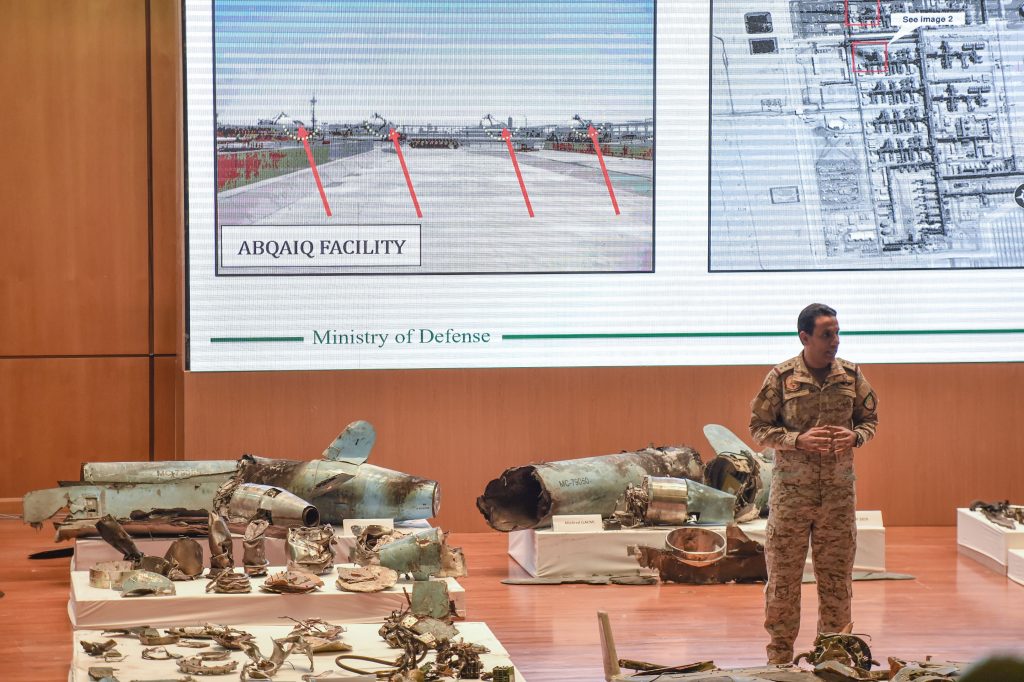 Britain, Germany and France backed the United States and blamed Iran on Monday for an attack on Saudi oil facilities, urging Tehran to agree to new talks with world powers on its nuclear and missile programs and regional security issues.

The Europeans issued a joint statement after British Prime Minister Boris Johnson, German Chancellor Angela Merkel and French President Emmanuel Macron met at the United Nations on the sidelines of the annual gathering of world leaders.

But Iran ruled out the possibility of negotiating a new deal with powers, Iranian Foreign Minister Mohammad Javad Zarif tweeted on Monday, saying European partners have failed to fulfill their commitments under a 2015 nuclear pact.

European leaders have struggled to defuse a brewing confrontation between Tehran and Washington since U.S. President Donald Trump last year quit the 2015 deal, which assures Iran access to world trade in return for curbs on its nuclear program.

The United States reimposed sanctions on Iran and sharply tightened them. Iran has responded by gradually breaching nuclear commitments made in the 2015 accord and has set an October deadline to further scale back its nuclear obligations unless the Europeans salvage the pact by shielding Tehran’s economy from U.S. penalties.

“The time has come for Iran to accept negotiation on a long-term framework for its nuclear programme as well as on issues related to regional security, including its missiles programme and other means of delivery,” Britain, France and Germany said.

Tensions rose on Sept. 14 following an attack on Saudi Arabia’s oil facilities, which Riyadh and Washington have blamed on Iran. Tehran denies responsibility, and Yemen’s Iran-aligned Houthi group, which has been battling a Saudi-led military coalition, has said it carried out the attack.

“It is clear to us that Iran bears responsibility for this attack. There is no other plausible explanation. We support ongoing investigations to establish further details,” Britain, France and Germany said.

Macron has led a European push over the summer to find a compromise between the United States and Iran and wants to use the U.N. meeting as an opportunity to revive diplomacy, though his efforts have stalled in recent weeks.

When asked about Macron’s attempt to mediate, U.S. President Donald Trump said: “We don’t need a mediator. … They (Iran) know who to call.”

The United States was seeking to address the issue through diplomacy and a multilateral effort, and there was a role for the United Nations Security Council to play, Hook said without elaborating.

In an interview with NBC on Monday, Johnson said Trump was “the one guy who can do a better deal … I hope there will be a Trump deal.”

Trump flirted with meeting Iranian President Hassan Rouhani while both are in New York for the U.N. General Assembly, but the chances appear slim.

“We haven’t received any requests this time, yet, for a meeting and we have made it clear a request alone will not do the job,” Iranian Foreign Minister Zarif told reporters in New York earlier on Monday. “A negotiation has to be for a reason, for an outcome, not just for a handshake.”

He said there are conditions for a meeting – Iran has demanded the United States lift sanctions – and then there could be a meeting between Iran, the United States, France, Britain, Germany, Russia and China – the original parties to the nuclear deal – but there would be no bilateral meeting.

Speaking after he arrived in New York on Monday, Rouhani said Iran’s message to the world “is peace, stability and also we want to tell the world that the situation in the Persian Gulf is very sensitive,” the state news agency IRNA reported.

Trump has criticized the 2015 nuclear accord, negotiated under then-U.S. President Barack Obama, for “sunset” clauses by which some of its provisions will expire as well as for its failure to address Iran’s missile program and regional activities.

A senior Gulf official, speaking on condition of anonymity, said Gulf countries, the United States, the Europeans and others needed to engage in “collective diplomacy” to defuse tensions.

“The conversation should no longer be about the [2015 nuclear deal] but Iran’s missile program and its regional misbehavior, which are as important if not more important – they have the potential to hold the region to ransom,” the official said.