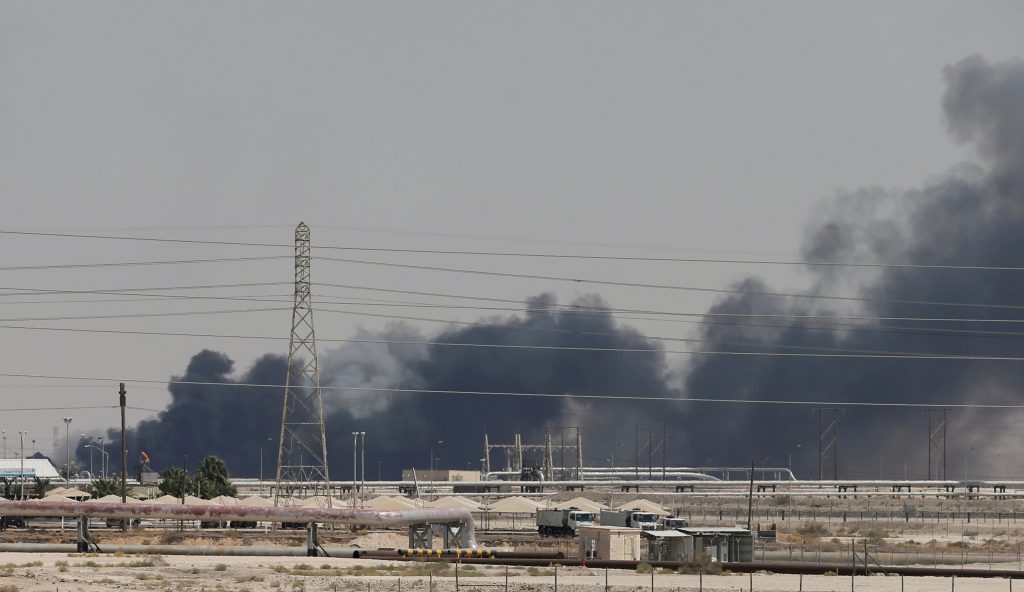 Saudi Arabia said it would show evidence on Wednesday linking regional rival Tehran to an unprecedented attack on its oil industry that Washington believes originated from Iran in a dangerous escalation of Middle East frictions.

Tehran has denied involvement in the Sept. 14 attacks on oil plants, including the world’s biggest crude processing facility, that initially knocked out half of Saudi Arabia’s production.

“We don’t want conflict in the region … Who started the conflict?” Iran’s President Hassan Rouhani said on Wednesday, blaming Washington and Tehran for a war in Yemen.

Concrete evidence showing Iranian responsible, if made public, could pressure Riyadh and Washington into a response, though U.S. President Donald Trump said he does not want war.

The Saudi Defense Ministry said it will hold a news conference on Wednesday afternoon to present “material evidence and Iranian weapons proving the Iranian regime’s involvement in the terrorist attack.” Riyadh has already said preliminary results showed the attack did not come from Yemen.

The officials did not provide evidence or explain what U.S. intelligence they were using for the evaluations.

Some U.S. allies, as well as those of Iran, have asked for proof behind accusations Tehran was responsible for the attack that cut 5% of global production. Saudi Arabia, the world’s top oil exporter, said on Tuesday the 5.7 million barrels per day of output would be fully restored by the end of the month.

Oil prices fell after the Saudi reassurances, having surged more than 20% at one point on Monday – the biggest intra-day jump since the 1990-91 Gulf War.

Illustrating international caution on such an inflammatory issue, Japan’s new defense chief said Tokyo has not seen any intelligence that shows Iran was involved.

A senior U.S. official called for a U.N. Security Council response to the attacks, although success is unlikely because diplomats say Russia and China – who have veto powers – are likely to shield Iran.

One of the three U.S. officials voiced confidence the Saudi probe would yield “compelling forensic evidence” determining the origins of the attack that has exposed serious gaps in Saudi air defenses despite billions of dollars spent on Western military hardware.

Saudi U.N. Ambassador Abdallah Al-Mouallimi told Reuters the experts monitoring sanctions on Iran and Yemen were heading to Saudi Arabia along with those from a separate independent panel who also report to the Security Council.

France is also to send experts in response to a request from Saudi Arabia’s crown prince.

Iran’s Supreme Leader Ayatollah Ali Khamenei ruled out talks with the United States unless it returns to the nuclear accord between Iran and the West that Washington quit last year.

Trump said on Monday there was “no rush” to retaliate and Washington was coordinating with Gulf Arab and European states.

Washington and its Gulf Arab allies also want Iran to stop supporting regional proxies, including the Houthis who have been battling a Saudi-led military coalition in Yemen for four years.

Despite years of airstrikes against them, the Houthi movement boasts drones and missiles able to reach deep into Saudi Arabia, the result of an arms race since the Western-backed, Sunni Muslim coalition intervened in Yemen against the group in March 2015.

Iran’s clerical rulers support the Houthis, but Tehran denies it actively supports them with military and financial support. In Wednesday’s video carried by Iran’s media, Rouhani said the oil attack was a “warning” by Yemenis.