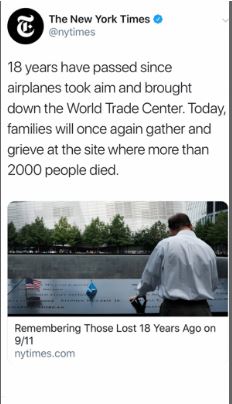 A New York Times tweet that said that “airplanes took aim” at the Twin Towers of New York City’s World Trade Center was deleted after it was widely criticized, and the paper stating that is was updated and edited “for clarity”.

Fox News reported that the original tweet, in the New York Times reporting marking the 18th anniversary of the September 11, 2001, attack on the Twin Towers in New York City and the Pentagon in Washington, D.C., was widely called out for not mentioning that the planes that hit the towers were hijacked by terrorists from al-Qaida.

The original tweet linked to a story about families gathering at the memorial site at Ground Zero in New York City to commemorate the Al-Qaida attack that destroyed the Twin Towers and killed three thousand people.

Once the firestorm over that tweet erupted, the New York Times re-issued the tweet with the story link to read, “18 years after nearly 3,000 people were lost, families of those killed in the terror attacks will gather at the 9/11 memorial. There will be a moment of silence at 8:46 a.m., then the names of the dead — one by one — will be recited.”

Despite its removal from the New York Times account, a screen shot of the original tweet was posted by numerous Twitter users, with some pointing out what they cited as proof of the media bias and even calling the paper “anti-American”.

“Those planes did not fly themselves,” wrote one Twitter user, while another tweeted, “Some planes did something,” an reference to Ilan Omar’s comment in March about 9/11 that “some people did something.”

Mike Huckabee, a Fox News contributor, tweeted in response, “Twin Towers NOT brought down because ‘airplanes took aim’ at them, but b/c radical Islamists hijacked planes & took aim at them.”

Alex Griswold of the Washington Free Beacon tweeted, “I can’t believe I haven’t even clocked in yet, and we already have today’s dumb 9/11 tweet, AND it was from the New York Times.”