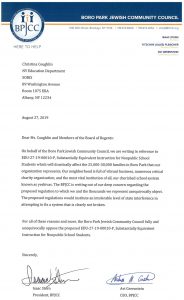 A strong letter drafted by the Boro Park Jewish Community Council was sent to the NYS Education Department. The letter clearly states the opposition of the Boro Park community towards the newly proposed regulations which threaten the existence of yeshiva education in New York State.

“It is the obligation of the Boro Park Jewish Community Council which represents over 30,000 families,” says Rabbi Avi Greenstein, CEO BPJCC, “to clarify our stand on this critical matter. The Education Department is doing its best to force their substantial equivalency regulations on private schools which is wrong on all counts. Their misguided notions regarding the success of our schools have nothing substantial to stand on as neither the State Education Department or the Board of Regents have taken the time to understand our yeshiva system or to visit a single yeshiva from Boro Park.”

The letter was submitted to the Board of Regents on Thursday, August 29, signed by Isaac Stern, BPJCC President and Avi Greenstein, BPJCC CEO.

The window for the time allowed for citizens to weigh in by submitting a letter to the State Education Department and Board of Regents will close on September 2. To add your voice to the thousands who have already done so, send a letter to www.voice.pearlsny.org/letter.