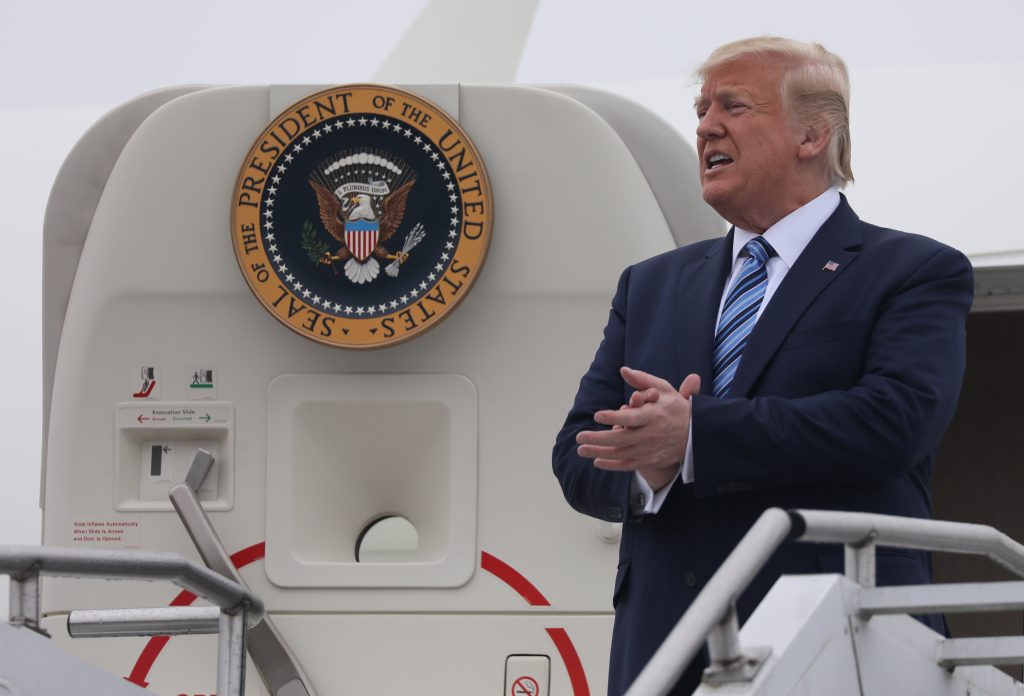 President Donald Trump was expected to defend his handling of the U.S. economy on Thursday night in New Hampshire as recession fears have suddenly cast doubt on his central claim for re-election that he has made the economy great again.

Trump was to speak at a packed campaign rally in Manchester, New Hampshire, a state that was pivotal to his winning the Republican presidential nominating race in 2016 and could prove important to his re-election chances in 2020.

Some U.S. Treasury yields have hit record lows and the stock market has plunged in recent days over fears of a recession, undermining Trump’s claim that he has resuscitated the economy. Analysts believe his trade war with China is one of the factors interfering with growth.

On a working vacation at his golf club in Bedminster, New Jersey, Trump has blamed the economic woes on Federal Reserve Chairman Jerome Powell’s hesitation to cut interest rates.

One view inside the White House is that the media is also to blame for overplaying the possibility of a downturn, which could end up encouraging consumers to slow spending, a source familiar with the discussions said.

The U.S. economy is the most closely watched indicator of a presidential election. Economic woes prompted voters to turn against Republican incumbent George H.W. Bush in the 1992 election won by Democrat Bill Clinton, and doomed Republican Senator John McCain’s campaign in 2008 against Democrat Barack Obama.

Trump said in the radio interview that “we had a couple of bad days” on the stock market but “we’re going to have some good days because we had to take on China.”

The president has steadily ratcheted up pressure on China to make a trade deal with ever-higher tariffs on Chinese imported goods. Amid concerns that American consumers were being hurt by higher prices on Chinese products heading into the important shopping season, Trump opted against raising tariffs on some electronic goods.

Trump is busily using Twitter to try to convince Americans that the economy is in good shape despite the market hiccups.

“The United States is now, by far, the Biggest, Strongest and Most Powerful Economy in the World, it is not even close! As others falter, we will only get stronger. Consumers are in the best shape ever, plenty of cash. Business Optimism is at an All Time High!” Trump wrote in a tweet.