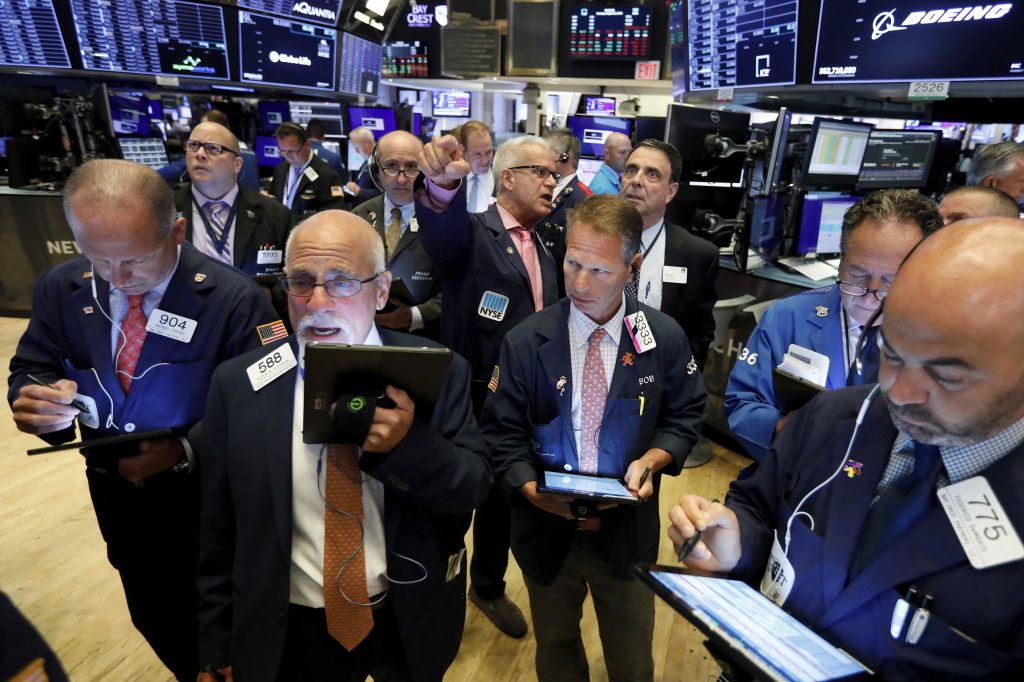 The sell-off adds to losses that the market racked up last week amid heightened anxiety over the U.S. China-trade war.

Investors are coming off of a week of wild swings that ended in yet another loss. The market has been riddled with worry that the fallout from the costly trade conflict will undercut an already slowing global economy and hurt corporate profits.

Traders shifted money into U.S. government bonds Monday, sending bond prices higher. That pulled down the yield on the 10-year Treasury to 1.65% from 1.73% late Friday. The yield is used as a benchmark for interest rates on mortgages and other consumer loans.

Real estate and utilities stocks posted the smallest declines. Traders usually seek the shelter of utilities and bonds when they want a more secure place to put their money because of concerns over economic growth.

Macy’s reports quarterly results on Wednesday and Walmart will report results on Thursday. They are among the last major companies to report their earnings for the latest quarter.

FEAR FACTOR: Anxiety and fear over the U.S.-China trade war continues to hover over the market and has taken stocks on a wild ride in August.

The S&P 500 index zoomed up and down last week, ending with its second straight weekly loss. The wild swings follow President Donald Trump’s threat to impose more tariffs on Chinese goods, followed by China’s move to allow its currency to weaken.

President Trump has said he’d be “fine” if the U.S. and China don’t go ahead with a meeting next month, dampening investors’ hopes for a path to resolving the economically damaging trade war.

MERGER CHATTER: Shares in Viacom and CBS fell amid published reports suggesting the entertainment companies are close to a merger deal. Viacom slid 4.6% and CBS lost 1.7%.

OVERSEAS: Stocks in Europe edged lower while indexes in Asia ended broadly higher. Hong Kong’s Hang Seng lagged and shed 0.4% as that city continues to deal with increased tensions from pro-democracy protests. The Hong Kong airport shut down on Monday when thousands of demonstrators occupied its main terminal.

Stocks in Argentina plummeted following a primary victory for a populist ticket in the nation’s presidential elections. The nation is in a deep economic crisis and the potential for a drastic change in leadership is rattling investors there.

Matías Carugati, chief economist for Management & Fit, said the victory of the populist Alberto Fernández team would put “sustained” pressure on the exchange rate and stocks due to the prospect that the nation could shift course to a more state-interventionist course for the economy.