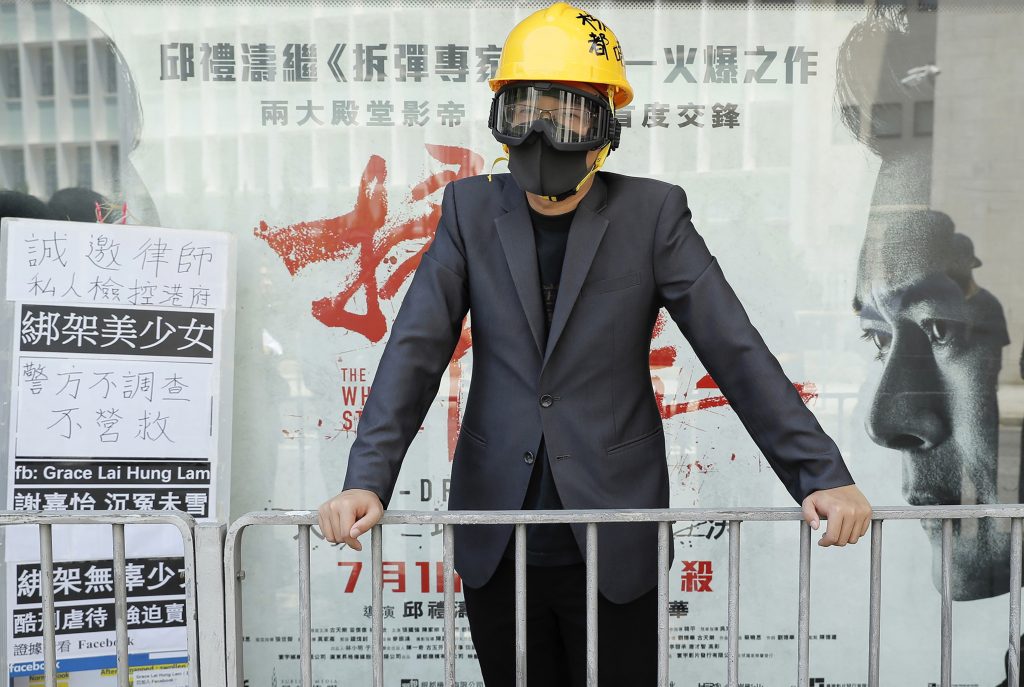 Hong Kong is facing its “most severe situation” since its handover from British rule in 1997 following weeks of demonstrations and the central government is considering what measures to take next, the head of Beijing’s Cabinet office responsible for the territory said Wednesday.

Zhang Xiaoming was speaking to Hong Kong residents attending a seminar in the mainland city of Shenzhen just across the border from the Asian financial hub that has been wracked by daily protests against the administration of Chief Executive Carrie Lam.

Those protests are getting increasingly violent and having “an increasingly broad impact on society,” Zhang told the 500 attendees, who included members of the Hong Kong and central government legislative and advisory bodies.

“It can be said that Hong Kong is facing the most severe situation it has faced since the handover,” Zhang said.

Officials in Beijing were “highly concerned” and studying the situation to make a determination and decide on measures to take, he said.

Hong Kong was returned to China under the framework of “one country, two systems,” which promised the city political, civil and economic freedoms not allowed under Communist Party rule on the mainland.

However, many Hong Kong residents feel Beijing has been increasingly encroaching on their freedoms. The protests were set off by proposed extradition legislation that if passed would have allowed some criminal suspects to be sent to China, where critics say they could face possible torture and unfair trials.

China so far has not visibly intervened in the situation, though in editorials and statements from officials it has condemned demonstrators and protest organizers as criminals, clowns and “violent radicals” and alleged that they have been inflamed by politicians from the U.S., Taiwan and elsewhere.

Speculation that the military could be deployed grew after Chinese officials pointed to an article in Hong Kong law that allows troops already stationed in the city to help with “public order maintenance” at the Hong Kong government’s request.

Hong Kong authorities have said they don’t anticipate any need to bring in troops or police from China to help impose order.

Lam herself reappeared Wednesday at the opening of an exhibition marking the 70th anniversary of the founding of the communist state.

“Over recent months, conditions in Hong Kong society have been extremely unstable,” Lam said in remarks distributed by her office. “The special administrative region government will certainly join with all of you to deal with it calmly, restore social order, safeguard rule of law and cherish Hong Kong, cherish ‘one country, two systems,’ and cherish our home.”

Protesters have been drawn from all professions and age groups. On Wednesday, several hundred lawyers sought a meeting with Secretary of Justice Teresa Cheng and staged a silent protest. The authorities have refused to open a dialogue with protesters and there was no immediate response from Cheng’s office.

Margaret Ng, a lawyer and a former lawmaker, said they wanted to meet Cheng and the director of public prosecution to seek an assurance that there was no political motive in prosecution of those detained in the protests.

Some 500 people have been arrested since the protests began in June and dozens have already been charged with rioting, which carries a maximum sentence of 10 years.

“One of the most important things about the rule of law is prosecution must not be abused because if abused, it is the most powerful instrument of oppression,” Ng said.

She and other lawyers urged protesters to avoid violence that could harm their cause.

Lawyer Dennis Kwok said government warnings of stern measures against protesters will merely flame the people’s anger. He called for an independent investigation into the actions of police and protesters.

Another Chinese official said Tuesday that it would be “only a matter of time” before those behind the protests are punished, further indicating that Beijing will take a hard line against the demonstrators and has no plans to negotiate over their demands for political reforms.

“We would like to make it clear to the very small group of unscrupulous and violent criminals and the dirty forces behind them: Those who play with fire will perish by it,” said Yang Guang, spokesman for the Chinese Cabinet’s Hong Kong and Macao Affairs Office.

At a daily briefing Wednesday, police spokesman Tse Chun-chung condemned members of a crowd of around 1,000 who the night before surrounded a police station to demand the release of a university student arrested for apparently buying laser pointers.

He said police fired 20 tear gas canisters to clear the demonstrators from the blue-collar Sham Shui Po neighborhood. A total of 589 people have been arrested in the protests, Tse said, including people using laser pointers, which are classified as offensive weapons because of their ability to cause harm to the eyes.