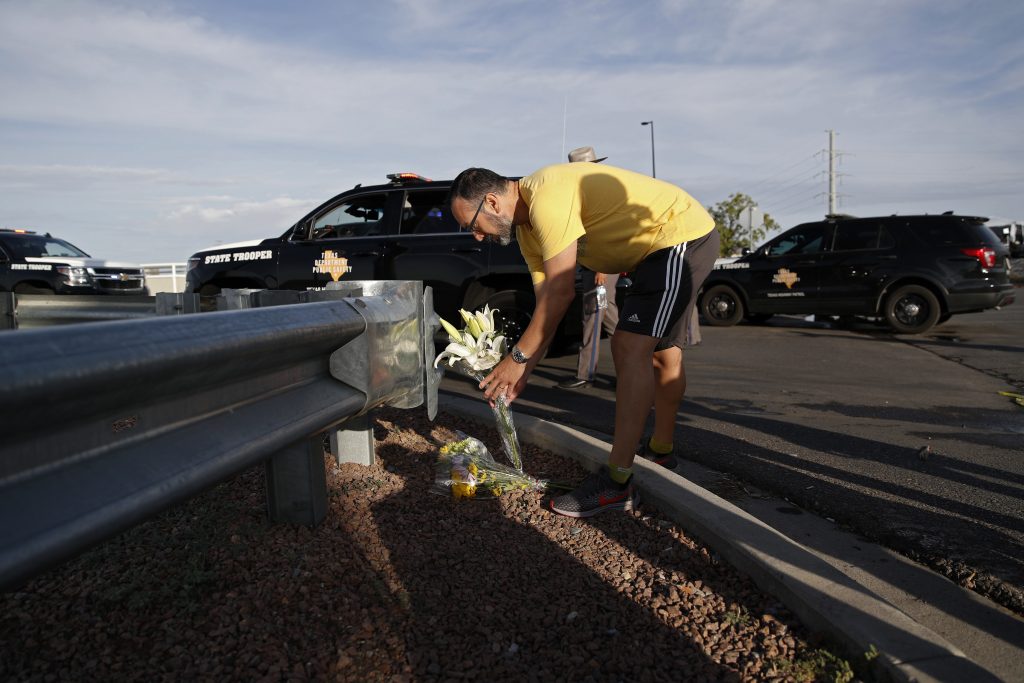 The El Paso massacre began like the fatal attacks earlier this year at mosques in New Zealand and a San Diego-area synagogue: with a racist manifesto and announcement on the anonymous message board 8chan, one of the web’s most venomous refuges for extremist hate.

And like after the mass shootings in Christchurch, New Zealand, and the Chabad of Poway, California, the El Paso attack was celebrated on 8chan as well: One of the most active threads there early Sunday urged people to create memes and original content, or OC, that could make it easier to distribute and “celebrate the (gunman’s) heroic action.”

“You know what to do!!! Make OC, Spread OC, Share OC, Inspire OC,” an anonymous poster wrote. “Make the world a better place.”

The message board’s ties to mass violence have fueled worries over how to combat a web-fueled wave of racist bloodshed. The El Paso shooting also prompted the site’s founder early Sunday to urge its current owners to “do the world a favor and shut it off.”

“Once again a terrorist used 8chan to spread his message as he knew people would save it and spread it,” Fredrick Brennan, who founded 8chan in 2013 but stopped working with the site’s owners in December, told The Washington Post. “The board is a receptive audience for domestic terrorists.”

Twenty people were killed at an El Paso shopping center following the attack by the suspected gunman, who posted a jumbled and racist screed to 8chan minutes before the shooting that ranted against a “Hispanic invasion.” The shooter wrote that he was inspired by the Christchurch massacre, which also began with an 8chan post, and he urged viewers to “do your part and spread this brothers!”

The El Paso shooting, some terrorism experts said, could ratchet up the pressure on federal law enforcement and governmental authorities seeking to combat a site that calls itself “the darkest reaches of the internet.”

The site has survived, extremism experts said, in part due to a reluctance from some law-enforcement and intelligence officials to categorize white-supremacist and far-right movements as terror threats. The site has for years been shielded by U.S. laws that limit websites’ legal liability for what their users post and has been further protected by an internet infrastructure that makes it difficult to take sites down.

Some online researchers also fear that a shutdown of 8chan would only spur hate groups to organize elsewhere. The site’s leaders have appeared emboldened in the face of criticism, adding a message in recent months at the top of its homepage: “Embrace infamy.”

The site is registered as a property of the Nevada-based company N.T. Technology and owned by Jim Watkins, an American web entrepreneur living in the Philippines. Asked for comment, Watkins replied with a single sentence: “I hope you are well.”

Watkins has declined interview requests after every mass shooting. Following the Christchurch massacre, he released a video defending the site as a refuge for free speech online and referring to the shooter as a criminal alien.

Watkins’ son, Ron, who oversees the site, did not respond to requests for comment. He has mocked the idea that 8chan could do more to stop mass violence, tweeting in April: “Deletion within minutes is not enough, apparently.”

After the Poway shooting in April, 8chan’s Twitter account blamed the news media for publicizing the crime and said the shooter’s post was taken down nine minutes after creation. But the board regularly allows posters afterward to promote the shooting, spew hateful comments and cheer on further violence to beat the last attack’s body count, or “high score.”

The Poway shooter wrote before his attack that he’d been visiting 8chan for “a year and a half, yet what I’ve learned here is priceless. It’s been an honor.”

Joan Donovan, the director of the Technology and Social Change Research Project at Harvard University’s Shorenstein Center, said posting to 8chan before a mass shooting has become a “tactical” way for attackers to gain attention and amplify their message.

“Mass shooters can control the public conversation about their motives, while at the same time provide the public with a clear explanation for their actions,” Donovan said.

She pointed to the pattern that has developed in the Christchurch, Poway and El Paso shootings: “1. Post a racist screed. 2. Carry out racist violence. 3. Inspire others to do the same.” Of the manifestos, she said, they “are becoming more instructive than they are explanatory. This has me very worried that targeted violence will become a meme itself.”

Shooters post their manifestos to 8chan, Brennan said early Sunday, because the audience there celebrates racist, anti-Semitic and white-supremacist violence; moderation is nearly nonexistent; and it has a “morbid record of success for maximum spread.”

Clinton Watts, a senior fellow at the Foreign Policy Research Institute and a former FBI counterterrorism expert, said 8chan mirrored the role that other fringe sites play in international terrorism, allowing “one-off extremists to connect and catalyze their operations.”

The 8chan board, he said, “has become the place where white nationalist extremists and anyone wanting to perpetrate violence can congregate, radicalize, plot attacks and share manifestos,” he said. “The increased interconnection between what would otherwise be lone actors accelerates the pace of attacks and their lethality.”

The FBI, he added, “needs the legislation and resources to pursue these inspired attacks the way they did international terrorism since 9/11.” He urged the federal government to designate white-nationalist-inspired violence a domestic terror threat, which would allow the FBI to more closely assess the calls to violence arising from 8chan and similar sites.

The FBI said in a statement in March that “individuals often are radicalized by looking at propaganda on social media sites and in some cases may decide to carry out acts of violence” but that the bureau “only investigates matters in which there is a potential threat to national security or a possible violation of federal law.”

In April, the FBI filed a search warrant of 8chan’s Nevada office seeking information on the Poway shooting suspect’s activity and responses to his post.

Brennan also provided evidence that the manifesto first posted onto 8chan ahead of the El Paso shooting was real. He said the document’s name included the suspect’s name and that site data shows it was uploaded minutes before the first 911 call. Some “conspiracy theorists and 8chan apologists,” he said, have been pushing the idea that it was a fake. Police have also confirmed the document is real.

The site, Brennan said, is kept online largely as a vanity project for Watkins and makes very little money, helping shield it from advertiser or public pressure. 8chan does not work with mainstream digital-ad networks but sells ad space directly to companies and solicits donations from users, which Brennan believed earned the site about $100 a month.

The site protects itself from legal threats by removing copyrighted content, but allows practically everything else onto the site without limits. Its servers, Brennan said, are distributed around the world, making it more difficult to take down. The site said last summer that it had nearly 8 million unique users visit every month.

Pressure, however, is building on mainstream companies that help keep 8chan online. Cloudflare, a San Francisco-based firm that helps web companies defend against cyberattacks, has continued to work with 8chan, saying it serves websites regardless of their content. The company told The Post earlier this year that it bans terrorist-propaganda networks but would not discuss details of its 8chan partnership.

Cloudflare and its chief Matthew Prince did not respond to requests for an explanation of how 8chan is different from the other terrorist sites it bans. The activist group Sleeping Giants tweeted about Cloudflare’s connection early Sunday, “If you’re doing business with a site that helps people spread violent, racist ideologies, you are just as culpable. Full stop.”