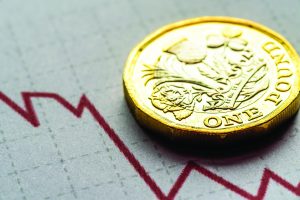 Sterling sank to a 30-month low on Thursday, pressured by a stronger dollar and renewed worries that Britain could crash out of the European Union on Oct. 31 without a trade agreement in place.

The pound shed more than 4% of its value in July, its worst month since October 2016, after new Prime Minister Boris Johnson’s vow to leave the EU on Oct. 31 whether or not a transition deal can be agreed with Brussels. This sparked panic among investors that Britain was on course for a disorderly divorce.

“Sterling remains vulnerable to a further escalation in Brexit tensions and we anticipate the market will likely discount higher risks of a ‘no deal’ outcome in the weeks ahead,” said Roger Hallam, Currency Chief Investment Officer at JP Morgan Asset Management.

Hallam also said it expected the Bank of England, which is holding its monetary policy meeting on Thursday, to sound more dovish, “eroding interest rate support for sterling.”

“The U.K’.s significant current account deficit [4.4% of GDP] also makes the U.K. particularly vulnerable to a deterioration in Brexit sentiment,” he said in emailed comments.

The BoE will give its rate decision at 1100 GMT, and is expected to keep rates on hold but strike a more dovish tone as it seeks to ease concerns about the potential economic hit by a disruptive break from the EU.

Money markets are now pricing in a 25 basis point rate cut by the BoE before early 2020, although policymakers may push back against expectations for lower rates in the coming months.

On the Bank of England’s trade-weighted index, which measures sterling against its trading partners’ currencies, the pound has dropped to its weakest since early November 2016, having fallen more than 7% since early May.

Also weighing on sterling are signs of an economic slowdown in the British economy.

British manufacturers’ output fell by the most in seven years in July, the Purchasing Managers’ Index survey for the manufacturing sector showed, as Brexit worries and weaker global demand choked off growth.

The July survey had a reading of 48, the same as the June reading but slightly better than economists’ forecasts.

Kit Juckes, currencies analyst at Societe Generale, said that amid “the ongoing political carnage as Boris Johnson lays out his Brexit plans and the weakness of the economy, there’s nothing to like about the pound.”