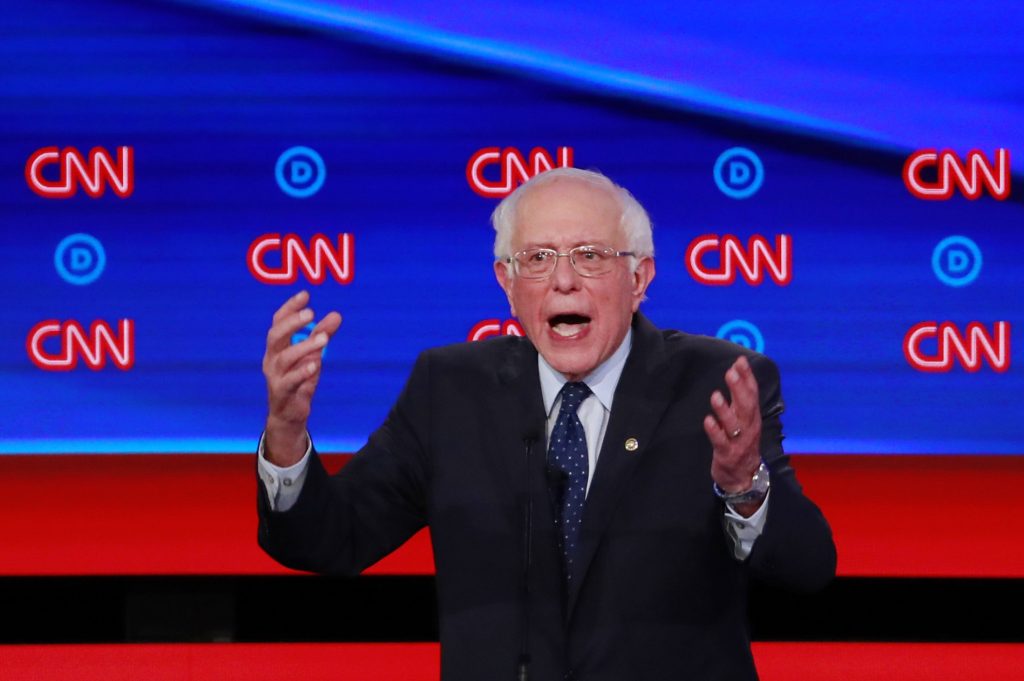 The Democratic Party’s two leading progressives came under fire on Tuesday from a debate stage stuffed with moderates who said their “impossible” proposals and “wish-list economics” risked keeping Republican President Donald Trump in the White House for four more years.

U.S. Senators Elizabeth Warren and Bernie Sanders stood side by side on the first night of the second Democratic presidential debate as they fended off criticism from more moderate rivals competing for the party’s nomination to take on Trump in the 2020 election.

Warren and Sanders struck back, saying the rivals have adopted the Republican Party playbook in criticizing progressive policies and they are tired of hearing Democrats shy away from big ideas.

Here are some highlights from the debate.

The first question went to Sanders, of Vermont, when the interviewer quoted former Representative John Delaney as saying the senator’s Medicare for All plan was unworkable and would amount to political suicide that will get Trump re-elected. “What would you say to Congressman Delaney?”

He said middle-class citizens may pay more in taxes, but they will no longer pay private insurance premiums and thus overall less money. They would not have to worry about their care, he added.

“Healthcare is a human right, not a privilege,” Sanders said.

Delaney said there can be a universal healthcare system that guarantees basic care without eliminating private insurance.

Warren interjected after their exchange: “We’re not trying to take healthcare away from anyone. That’s what Republicans are trying to do.”

Pete Buttigieg, mayor of South Bend, Indiana, said it was time to stop worrying about what Republicans will say.

Democrats have made access to affordable healthcare one of their defining issues as the Trump administration has worked to chip away at his Democratic predecessor Barack Obama’s signature 2010 Affordable Care Act.

Montana Governor Steve Bullock, trying to make his mark during his first debate appearance, challenged Warren over her proposal to decriminalize border crossings, an issue that has tripped up several candidates this election season.

Bullock said the United States can have a humane approach to immigration with the right leader.

“The biggest problem we have right now that we have with immigration is Donald Trump. He’s using immigration to not only rip apart families but rip apart this country,” he said. “You don’t have to decriminalize everything.”

Warren blamed both Trump and existing laws, saying they allowed a president like him to lock people up at the border.

“We need to fix the crisis at the border and a big part of how to do that is we do not play into Donald Trump’s hands,” she said.

“But you are playing into Donald Trump’s hands,” Bullock retorted. “A sane immigration system needs a sane leader. And we can do that without decriminalizing and providing healthcare for everyone.”

Candidates sparred over how to approach China and criticized the Trump administration’s repeated use of tariffs to try to win concessions in trade agreements.

Former Colorado Governor John Hickenlooper said the United States needed a new approach to China instead of tariffs. “Trade wars are for losers,” he said. “Let’s negotiate (a) better trade deal but you are not going to win against China in a trade war when they’ve got 25% of our total debt.”

U.S. Representative Tim Ryan of Ohio said the United States needs “a targeted response against China but you know how you beat them? You out compete them,” Ryan said. “We’ve got to fill these factories in Detroit, in Youngstown that used to make cars and steel.”

Former Representative Beto O’Rourke said the Trump tariffs “are a huge mistake. They constitute the largest tax increase on the American consumer, hitting the American consumer and working poor especially hard. … When have we ever gone to war — including a trade war — with our allies and friends and partners?”

Bullock said using tariffs to win trade deals did not make sense — for “farmers anywhere or the manufacturers here in Detroit.”