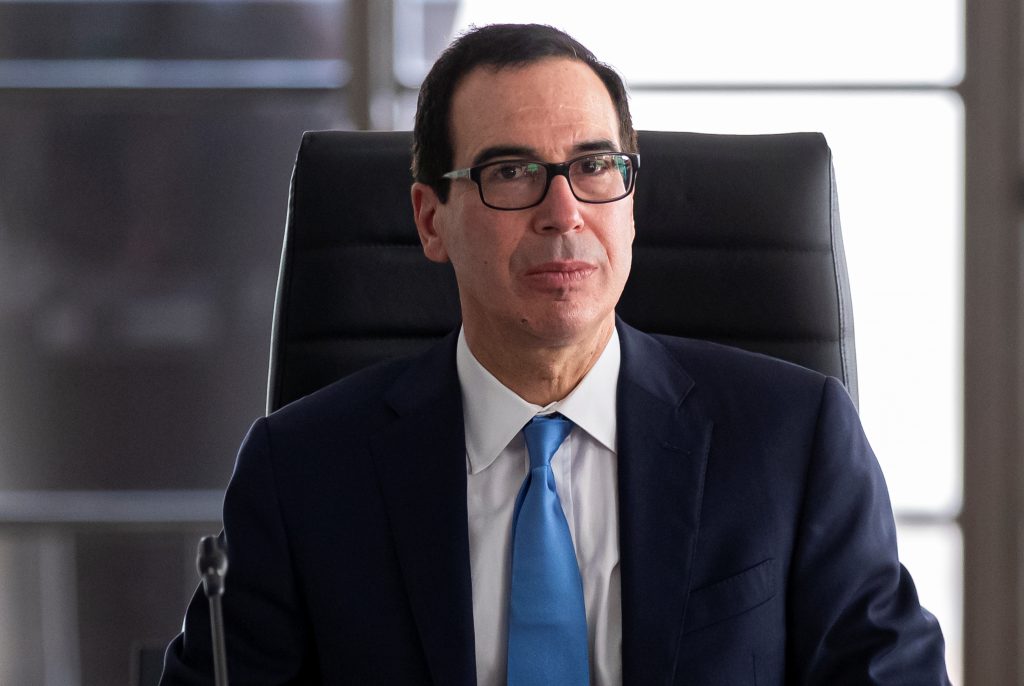 White House officials and congressional leaders defended a controversial budget deal on Tuesday, hoping to assuage concerns from conservatives and liberals ahead of a crucial House vote this week.

Treasury Secretary Steven Mnuchin met with Senate Republicans at a lunch on Capitol Hill, conveying that President Donald Trump fully supported the deal and would sign it into law. Republicans felt burned by Trump last year after they voted on a budget deal they thought he supported, only to have the White House withdraw his backing at the last minute.

“The four (congressional) leaders and the president are fully on board with this,” Mnuchin told reporters as he left the meeting.

Still, the effort to whip up political support showed signs of strain.

A number of conservative Senate Republicans announced their opposition to the two-year, $320 billion deal, complaining that it adds to the ballooning deficit while doing nothing to constrain spending. Mnuchin defended the agreement, saying it was crucial to increase military spending and suspend the debt ceiling through July 2021, lifting the prospect of a full-blown financial crisis later this year.

But Sen. Ron Johnson (R-Wis.) said he’d told Mnuchin the deal should have included changes to take the threat of future government shutdowns off the table.

“If we don’t get a structural reform in exchange for an increase the debt ceiling, I don’t see how I can support this thing,” Johnson said.

Sen. Mike Braun (R-Ind.) said he declared his opposition to the deal during the lunch with Mnuchin. And while some senators said Mnuchin had effectively conveyed the stakes for the Pentagon budget and looming debt crisis absent a deal, others left the lunch with the treasury secretary unpersuaded.

“I didn’t learn anything … It was more of a rah, rah session,” Kennedy said, adding he was undecided how he’d vote. “I think it says about the United States Congress, both sides, that we really don’t have a commitment to getting control of the credit card.”

On the Democratic side, some liberals including Sen. Jeff Merkley (D-Ore.) expressed consternation about a side agreement struck by Speaker Nancy Pelosi (D-Calif.) to keep controversial policy provisions off spending bills. This would include agreeing not to limit Trump’s ability to transfer money to build his border wall. The practical implication of the agreement seems limited, since any such changes would require bipartisan support anyway, but White House officials were touting it as an important win.

Despite the complaints from rank-and-file lawmakers of both major parties, White House officials and Democratic and Republican leaders all argued that the deal was the best they could get in divided government, and blamed their political opponents if it wasn’t any better.

“I make no apologies for this two-year caps deal,” said Senate Majority Leader Mitch McConnell (R-Ky). “I think we’ve done the best we can with this divided government.”

Sen. Richard Durbin of Illinois, the No. 2 Senate Democrat and vote-counter, said the deal was better than any of the alternatives.

“The notion of shutting down the government or defaulting on the America debt — those are unacceptable,” Durbin said.

Exiting the GOP lunch, Mnuchin asked how he would defend the deal against its GOP critics. “Well, we needed a debt ceiling increase, that was incredibly important,” Mnuchin replied. “And again we couldn’t get a deal without getting bipartisan support so the Democrats, they compromised on a lot of things along the way and we had to make certain compromises.”

The budget deal, announced Monday, would suspend the debt ceiling through July 2021 and raise the budget for the military and many other programs for two years. Lawmakers would still need to approve individual spending bills, but the agreement is expected to make it much less likely that there will be a government shutdown when existing agency budgets run out Oct. 1. But the budget also appears to lock in a large gap between tax revenue and government spending, which could breach $1 trillion this year and continue in perpetuity if changes aren’t made.

The government must borrow money to finance that gap and pay interest on the growing debt.

Lawmakers were rushing to cut the deal because Mnuchin had warned that the treasury could run out of money by early September to pay all of the government’s bills if the debt ceiling wasn’t raised by then. Congress is set to go on a lengthy August recess soon, leaving legislators little time to maneuver.

The House is expected to vote on the deal this week, with the Senate to follow next week.

Pelosi released a letter to House Democrats touting what she described as wins in the deal, including extending the debt limit, obtaining increased domestic nondefense spending, avoiding onerous budget caps known as “sequestration,” and staving off the administration’s demands for spending cuts to accompany the budget increases.

“I urge you to support this bill, which will avoid the damage of sequestration and ensure that we can continue to advance transformative progress For The People,” Pelosi wrote.

But reaction from lawmakers in the House made clear the speaker will have to navigate opposition from liberal Democrats and conservative Republicans to pass the deal with the votes of more moderate-leaning lawmakers in both parties.

Rep. Alexandria Ocasio-Cortez (D-N.Y.) complained about a double standard that prioritized tax cuts and spending Republicans favored but refused to extend money for things she advocates for, like college education.

And Rep. Mark Walker (R-N.C.) posted a video on Twitter of the DC comic book figure the Joker standing in front of an inferno, and labeled it “Budget deal.”

Acting White House budget director Russ Vought, who had fought largely unsuccessfully to secure large spending cuts as part of the agreement, acknowledged the GOP frustration and promised to push for spending reductions in the future.

“Look, I love the concern of the conservatives who are bringing attention to the problems that we have with fiscal responsibility in this town,” Vought said on Fox News.

The budget has grown markedly since Trump took office, even though Trump campaigned on a promise to eliminate the now-$22 trillion debt by the time he left the White House after eight years.