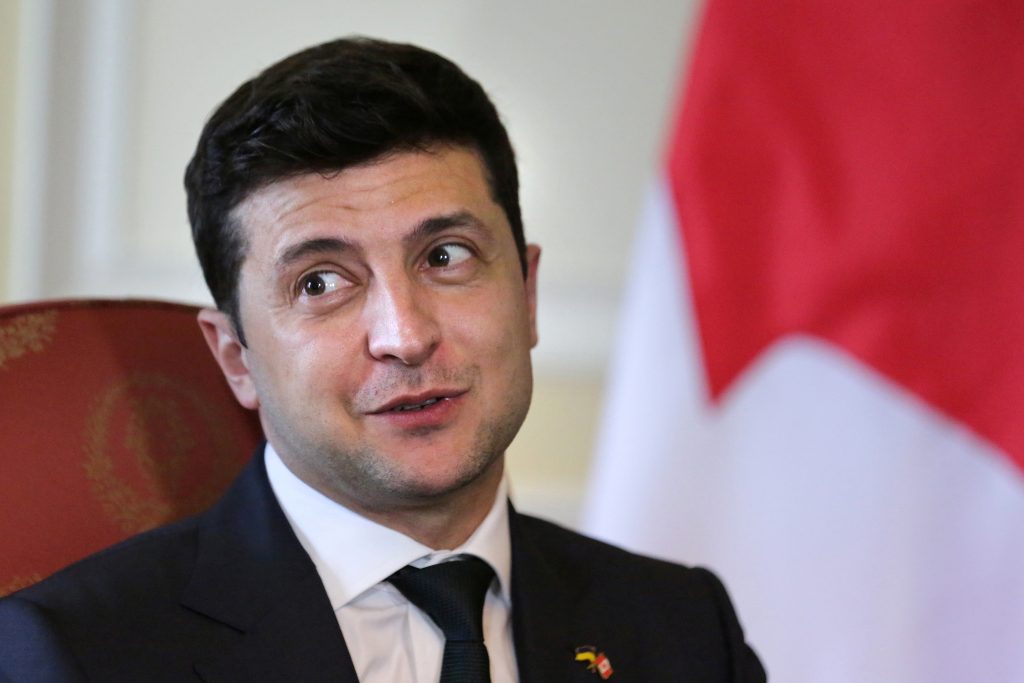 President Volodymyr Zelensky is on his way to winning a convincing mandate for his agenda in Ukraine’s parliamentary elections on Sunday, matching the actor-turned-politician’s landslide victory in the presidential race three months ago.

Ukraine’s national exit poll forecast a victory of 44 percent for Zelensky’s Servant of the People party, named for a comedy in which he played an unknown schoolteacher who is catapulted to the presidency overnight.

Half of the deputies in Ukraine’s 450-seat parliament are chosen from party lists, according to the results of the popular vote, and half in individual districts in first-past-the-post contests.

Some analysts believe Zelensky’s party could win an outright parliamentary majority, which would be a first for any party since Ukraine gained independence in 1991. Others see a coalition as more likely.

Parliament’s composition will become clear only after the results of the individual races are announced.

Whatever the final result, however, Zelensky’s triumph means his party will dominate the parliament, and he could become one of the most powerful leaders in the history of this geopolitically pivotal former Soviet republic, where security forces continue to battle Russian-backed separatists and Russian forces in eastern Ukraine.

Zelensky defeated Poroshenko in the April presidential election by nearly 50 percentage points, though his only previous political experience was playing a president on TV.

After voting at a polling station outside the center of Kiev earlier Sunday, Zelensky told the crush of journalists gathered that he did not envision forming a coalition “with anyone from the old leadership.”

He also said that he wanted a prime minister who was a professional economist and “an absolutely independent person who has never been a prime minister, a speaker or a leader of any faction.”

Analysts say Vakarchuk’s Holos – which, like Servant of the People, was formed recently – is the most probable candidate to become coalition partner.

After casting his ballot, Vakarchuk, 44, told journalists that he would wait to see the results before talking about any partnerships, but he did not rule out joining a coalition.

Zelensky called the elections in one of his first acts as president, three months earlier than originally scheduled, in order, he said, to prepare the way for his reformist political program.

Poroshenko’s party and his allies still control parliament, which, under Ukrainian law, also has the power to approve and remove many government ministers. As a result, Zelensky has been working largely with a Poroshenko-appointed cabinet.

In calling the snap elections, Zelensky also hoped to continue to mine the anti-establishment sentiment that swept him to power before disillusionment set in among the electorate.

Five years after widespread protests in Ukraine ousted Moscow-friendly President Viktor Yanukovych, many voters are frustrated at what they see as a slow pace of reform, persistent corruption, an anemic economy and the lack of progress in resolving the conflict in the country’s east.

However, questions remain over what exactly Zelensky’s agenda will entail. On one hand, he has named well-known reformists to top positions, launched initiatives and said he would preserve Ukraine’s pro-Western political orientation.

But Zelensky has also taken some actions that have alarmed Western officials, such as calling for officials from the previous administration to be banned from serving in government.

Ihor Klymonchuk, 26, an IT specialist at a local bank, said he voted for Holos “because I think they’re honest.”

“I don’t support Servant of the People because I see in his team a lot of the same old corrupt faces who are trying to say that they’re new,” Klymonchuk added.

However, Andrei, 29, a soldier who preferred not to give his last name, said he voted for Zelensky and his party because he was “completely disappointed in the whole situation.”

“I want to give Zelensky and his party a chance to change something,” Andrei said. “Everything will become clear if he wins a majority.”