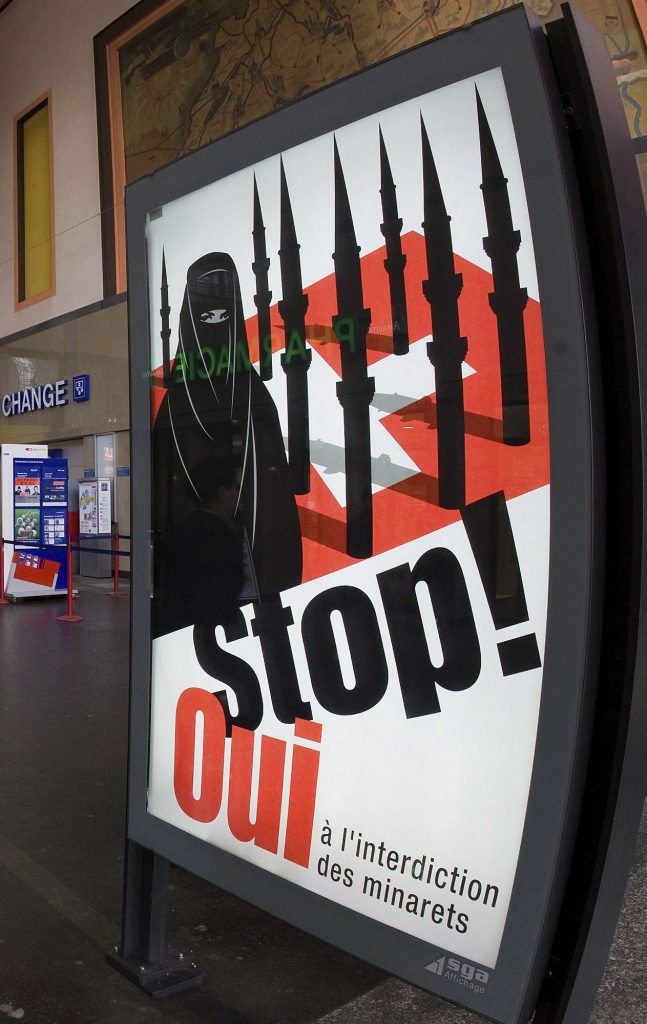 Government restrictions on religion have increased markedly in many places around the world, not only in authoritarian countries, but also in many of Europe’s democracies, according to a report surveying 198 countries that was released Monday.

The report released by the Pew Research Center, covering developments through 2017, also seeks to document the scope of religion-based harassment and violence. Regarding the world’s two largest religions, it said Christians were harassed in 143 countries and Muslims in 140.

Pew said the Middle East and North Africa, of the five major regions it studied, had the highest level of government restrictions on religion, followed by the Asia-Pacific region. However, it said the biggest increase during the 2007-2017 period was in Europe, where the number of countries placing restrictions on religious dress — including burqas and face veils worn by some Muslim women — rose from five to 20.

Among other measures in 2017, Austria enacted a ban on full-face veils in public spaces, and Germany banned face veils for anyone driving a motor vehicle or working in the civil service. In Switzerland, voters in two regions have approved bans on face veils, and voters nationwide backed a ban on the construction of new minarets.

In Spain, according to the report, some municipal governors have introduced bans on burqas and face-covering veils, and have also restricted public preaching and proselytizing.

Circumcision of boys also has been an issue in Europe. Muslim and Jewish groups in Germany and Slovenia have complained of government officials interfering in their religious traditions by trying to criminalize circumcision for nonmedical reasons.

Globally, among the 25 most populous countries, those with the highest level of government restrictions were China, Iran, Russia, Egypt and Indonesia, the report said. The lowest levels of restriction were in South Africa, Japan, the Philippines, Brazil and South Korea.

In terms of government harassment of religious groups, Pew said the phenomenon was most pronounced in the Middle East-North Africa region, but two examples from Asia were highlighted. The report noted that hundreds of thousands of Uighur Muslims were sent to reeducation camps in China, while in Myanmar there were large-scale abuses against the Rohingya, a Muslim ethnic minority, leading to massive displacement.

Another category in the report was religious harassment by individuals and social groups. The United States ranked among the worst-scoring countries in this category in 2017, in part because of the Unite the Right rally in Charlottesville, Virginia, where white supremacist protesters displayed swastika flags and chanted anti-Semitic slogans.

Pew said the biggest increase in religious hostility by individuals occurred in Europe. Victims of violence, in incidents cited in the report, include J’s Witnesses in Ukraine and a Rabbi and a Muslim woman in Belgium.

In Germany, Pew said, there were reports that thousands of refugees were pressured to convert to Christianity after being warned they might otherwise be deported.

Jocelyne Cesari, a professor of religion and politics at the University of Birmingham in Britain, views governmental and societal discrimination against Muslims in Europe as a threat to the broader principles of religious freedom.

She also suggested that headscarf bans and similar laws play into the hands of radical Islamist groups “that build their legitimacy among some segments of the Muslim youth in Europe by presenting the West as the enemy of the Islamic religion.”

Jonathan Laurence, a political science professor at Boston College who has written about Europe’s Muslims, said the continent’s debate over headscarf bans has strengthened the hand of populist parties while failing to bridge social divisions.

“Ironically, headscarf laws that were intended to force integration have instead accelerated the creation of publicly subsidized religious schools where children may wear what they like,” he said in an email.

Religious discrimination and persecution will be the topic of a three-day meeting hosted by the U.S. State Department starting Tuesday in Washington, attended by hundreds of government officials, religious leaders and other participants from all regions of the world.

Previewing the event, Sam Brownback, the U.S. government’s ambassador-at-large for international religious freedom, noted that religions of all sorts are vulnerable to persecution.

“Almost every faith that’s a majority somewhere is a minority somewhere else and often gets persecuted where they’re a minority,” Brownback said at a State Department briefing. “So that’s why a big part of our effort is to get the faiths to come together and to stand for each other.”

“We’re not talking common theology here — nobody agrees on theology,” he added. “We’re talking about a common human right.”

Pew’s annual reports are compiled by researchers who annually comb through numerous sources of information, including annual reports on international religious freedom by the State Department and the U.S. Commission on International Religious Freedom, as well as publications by European, U.N. bodies and nongovernmental organizations.