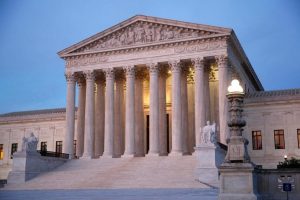 The Supreme Court has agreed to review a ruling that struck down a scholarship program in Montana, citing a law that forbids state aid to religious organizations.

The high court was urged to take the case by a slew of school-choice advocates, including Agudath Israel of America, who have high hopes that a ruling in favor of the program could have far-reaching ramifications for similar initiatives around the country.

They seem to have good reason for optimism. In 2017, in Trinity Lutheran Church, seven out of nine of the court’s justices ruled that a grant program to schools in Missouri was unconstitutional on the basis of its exclusion of religious schools.

Erica Smith, an attorney with the Institute for Justice, which is representing the group of parents currently suing Montana, expressed hope that the high court would put lower circuit judges in sync with rulings that have favored state aid to religious schools.

“Although the U.S. Supreme Court held that including religious options in educational choice programs is perfectly permissible under the federal Constitution, the lower courts have disagreed for decades about whether states may nevertheless exclude religious options in these programs,” she said. “We hope the Court will clarify that, just as the government cannot force families participating in these programs to choose a religious school, the government also cannot ban these families from choosing a religious school. The First Amendment requires government neutrality, not hostility, toward religion.”

In 2015, Montana’s legislature passed a bill that granted $150 tax credits to individuals and companies who donate to a privately controlled scholarship fund to send children from low-income families to private schools, making no differentiation between non-sectarian and religious ones.

Yet, shortly after its passage, a state agency refused to implement the program, claiming that it is a violation of Montana’s constitution, which contains a provision, known as a “Blaine Amendment,” barring any state funding of religious education. The amendments have met with increasing legal challenges in many states from school-choice advocates.

The state’s Supreme Court invalidated the entire program last year for both religious and non-sectarian schools. The state claims that it is correctly enforcing its constitution and stresses that the ruling did not single out religious schools.

In light of the possibility of striking down Blaine Amendments, which are in place in many states and seen as a significant thorn in the side of the school-choice movement, and an opportunity to test broader applications of the Trinity decision, the Montana case has attracted wide attention. Even while the case was at the state level, a long list of religious liberty advocates and the U.S. attorney filed briefs in support of the parents’ claims.

Agudah’s brief, which urged the court to consider the case, argued that, according to the justices’ position, no distinction should be made between rubber padding — the object of Missouri’s grant — or tuition aid.

“Under the Free Exercise Clause, only a state interest ‘of the highest order’ can justify a policy that discriminates against religious institutions and individuals in the provision of government benefits. Here there is no such interest, because to the contrary, it is well settled that students attending religious schools must be treated equitably,” said the brief in part.

The ACLU and ADL had joined several other organizations in supporting the state’s position.

The Supreme Court will hear arguments in its coming term, which will commence in the fall.