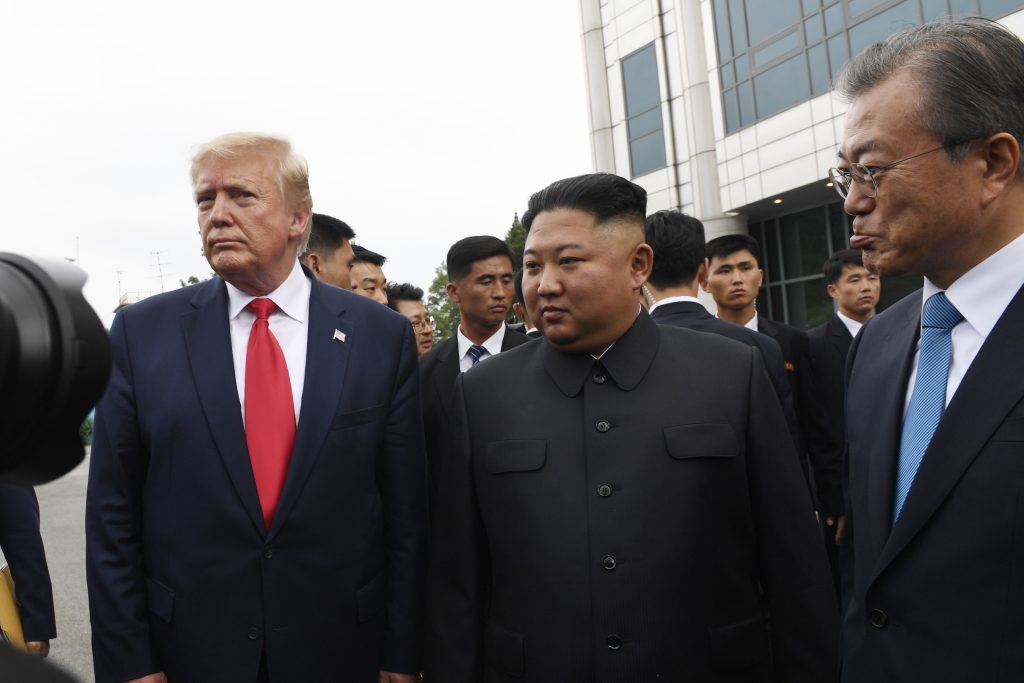 South Koreans watched the historic meeting between President Donald Trump and North Korean leader Kim Jong Un on Sunday with a mixture of hope and skepticism, wondering whether it will be enough to relieve their biggest security concern — North Korea’s nuclear weapons program.

The impromptu get-together at the inter-Korean border, where an armistice was signed 66 years ago to stop the fighting of a war that killed or injured millions, was Trump and Kim’s third overall meeting and first since their summit in February in Hanoi, Vietnam, collapsed over disagreements over sanctions relief.

Some South Koreans said Sunday’s meeting — which saw President Trump briefly step into North Korean territory to become the first U.S. president to cross into the country — would help resolve a deadlock in nuclear negotiations and revive a positive atmosphere for peace. Others, however, said it was yet another summit that was all style and no substance. They also raised concerns over what they viewed as South Korea’s declining voice in international efforts to deal with the North.

Since the Hanoi summit, North Korea has significantly slowed down dialogue and engagement with South Korea, while demanding that Seoul break away from Washington and resume inter-Korean economic projects held back by U.S.-led sanctions against the North. Sunday’s meeting between Trump and Kim at the border village of Panmunjom came days after the North vowed to “never go through” South Korea again when dealing with the United States.

Min Jung-won, a 26-year-old graduate student in Seoul, expressed hope that the Trump-Kim meeting would help thaw bilateral relations between the Koreas.

“I hope this meeting serves as an opportunity for the Koreas to revive economic cooperation and move a step forward toward the reunification of the Koreas,” said Min, who also called for the Koreas and the United States to formally declare an end to the 1950-53 Korean War.

But Kim Dae-won, a 40-year-old office worker in Suwon, a city just south of Seoul, said the Trump-Kim meeting was a made-for-TV spectacle that failed to address fundamental differences between Washington and Pyongyang that were exposed in Hanoi. He said the display of U.S. and North Korean flags and the absence of South Korean flags at the South Korean side of the border village where the leaders met symbolized how Seoul got sidelined in the process to resolve the nuclear standoff.

Seoul played a pivotal role in brokering the first summit between Trump and Kim Jong Un last June in Singapore, where they issued a statement calling for a nuclear-free Korean Peninsula without describing how or when it would occur. The lack of substance and fruitless working-level discussions set up the failure in Hanoi, which the Americans blamed on what they said were excessive North Korean demands for sanctions relief in exchange for a partial surrender of the North’s nuclear capabilities limited to an aging nuclear facility in Yongbyon.

“(South Korean President) Moon Jae-in has insisted on being in the driver’s seat in the process, but it now seems he only lent out his car for Trump and Kim Jong Un,” Kim Dae-won said.

“With Kim Jong Un, it’s clear a tweet works much better than a hotline,” he said, referring to a hotline between the Korean leaders that was established last year during a flurry of engagement but has so far never been used, according to South Korean presidential officials.

Choi Yong-chul, a 65-year-old business owner in Seoul, said Trump and Moon were both trying to serve their domestic political interests, rather than pursuing substantial progress in nuclear negotiations. Trump is now entering his re-election campaign, while Moon faces critical parliamentary elections next year.

“I think (the meeting) was a one-time event for Trump’s re-election,” Choi said.

During their three meetings last year at Panmunjom and Pyongyang, North Korea’s capital, Kim and Moon shared drinks and laughs and issued vaguely worded statements pledging denuclearization and peace. They also vowed to resume operations at a jointly run factory park in North Korea and South Korean tours to the North’s Diamond Mountain resort when possible, expressing optimism that sanctions would end, greenlighting such business activities.

The mood has drastically changed since Hanoi, with Kim accusing South Korea of acting like an “overstepping mediator” and demanding that it diverge from Washington to support Pyongyang’s position more strongly. The North also conducted short-range missile tests in May that experts saw as a warning to Seoul that last year’s inter-Korean peace progress could become nothing if the South fails to coax major concessions from the United States.

Sunday’s meeting between Trump and Kim came during the U.S. president’s visit to South Korea following meetings in Japan of the leaders of the Group of 20 major economies. Moon accompanied Trump to the border and briefly chatted with Kim, but was left out of the meeting between the U.S. and North Korean leaders.

“It was a summit that clearly shows the characteristic of Trump, who likes to use mass communication … but it’s still unclear whether these colorful diplomatic shows between the leaders could lead to progress,” said Nam Sung-wook, a professor at Seoul’s Korea University, who described Kim as the “main actor” of a Trump-made drama.

Nam cautioned against South Koreans getting their hopes up too high after the Panmunjom summit.

“The bigger the hopes, the bigger the disappointments,” he said. “I wonder if this (diplomacy) will have a happy ending.”

Kim Dong-yub, an analyst from Seoul’s Institute for Far Eastern Studies, expressed a different view, saying that the summit was worth it alone for creating momentum for reviving working-level negotiations between Washington and Pyongyang.

“This is just the beginning,” he said. “I am waiting for the day when Trump goes to Pyongyang and Kim goes to Seoul and Washington.”