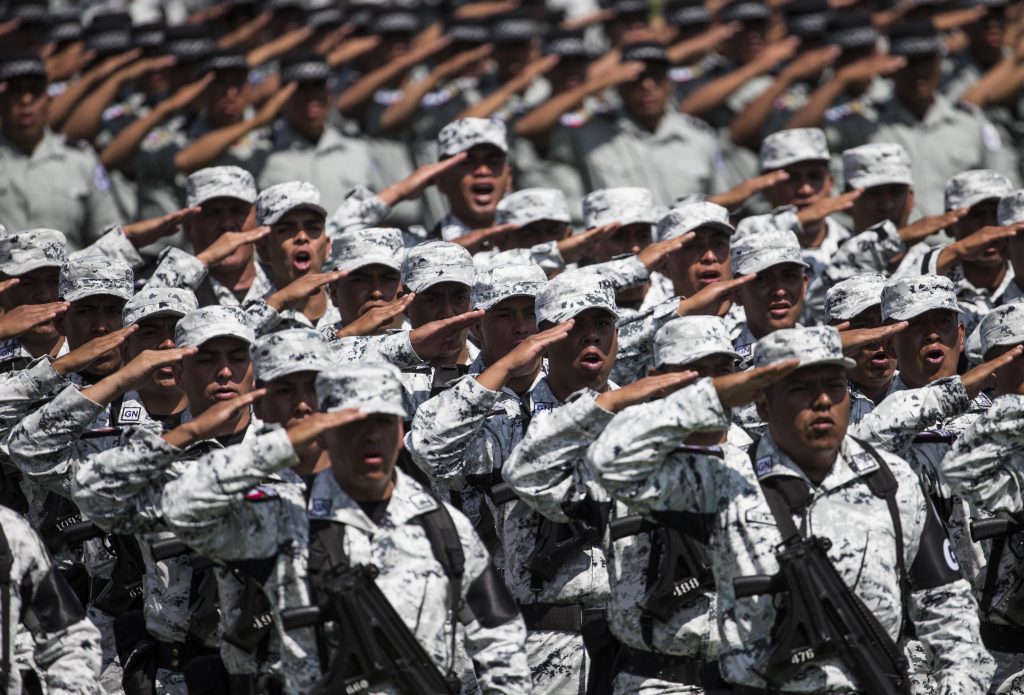 Mexico presented with much fanfare Sunday its new National Guard, which is supposed to stem endemic violence and restore peace in the country.

Mexican President Andrés Manuel López Obrador told hundreds of National Guard members assembled at a ceremonial military field in the capital that they are the “soul” of the newly formed institution. And he added, “I have faith in you.”

Mexico plans to first distribute 70,000 National Guard members across the country and then swell the ranks to 150,000 in the coming months, bringing together federal police, marines, soldiers and new recruits to protect Mexicans from rising rates of murder and other crimes. The Public Safety Department says those who transfer will maintain their ranks and benefits.

“With the National Guard, the darkest days of insecurity will stay in the past,” vowed Public Safety Minister Alfonso Durazo.

National Guard members stood at attention wearing snow white fatigues, black armbands with the initials GN and assault rifles slung across their chests while the officials spoke. Other, unarmed members of the force donned black hats with checkerboard patterns.

“There will be no rest, there will be no truce” as the National Guard works to “satisfy the most heartfelt demands of society,” said Luis Rodríguez Bucio, the brigadier general in charge of the force.

López Obrador took office in December, saying he wanted to address the root causes of Mexico’s spiraling violence rather than worry about going after the country’s drug lords like previous administrations. He repeated that desire Sunday, saying that the cornerstone of his security plan is to protect everyday Mexicans.

Critics of the National Guard argue that reliance on a federal entity for security means that states and local governments won’t be empowered to stamp out trouble on their own. They envision the National Guard moving from hotspot to hotspot, much like the military has done in recent years.

“They are just rebranding something so that it’s not called the army — but it’s the army,” said Alejandro Schtulmann, president of the Mexico City-based political risk firm EMPRA.

Last year saw the highest number of murders in Mexico in at least 20 years. Human rights groups had hoped that the new administration would reduce the military’s role in internal policing and the country had been under international pressure for years to reform its police and send the soldiers back to their barracks.

Nearly a third of the National Guard has already been stationed along Mexico’s southern and northern borders to stem the tide of migrants passing through the country to reach the U.S.

The militarization of the southern border could serve a double purpose by limiting the flow of drugs heading north from Central America, said Schtulmann. But deploying the National Guard for immigration purposes could also subtract valuable human resources from the effort to reduce violent crime.