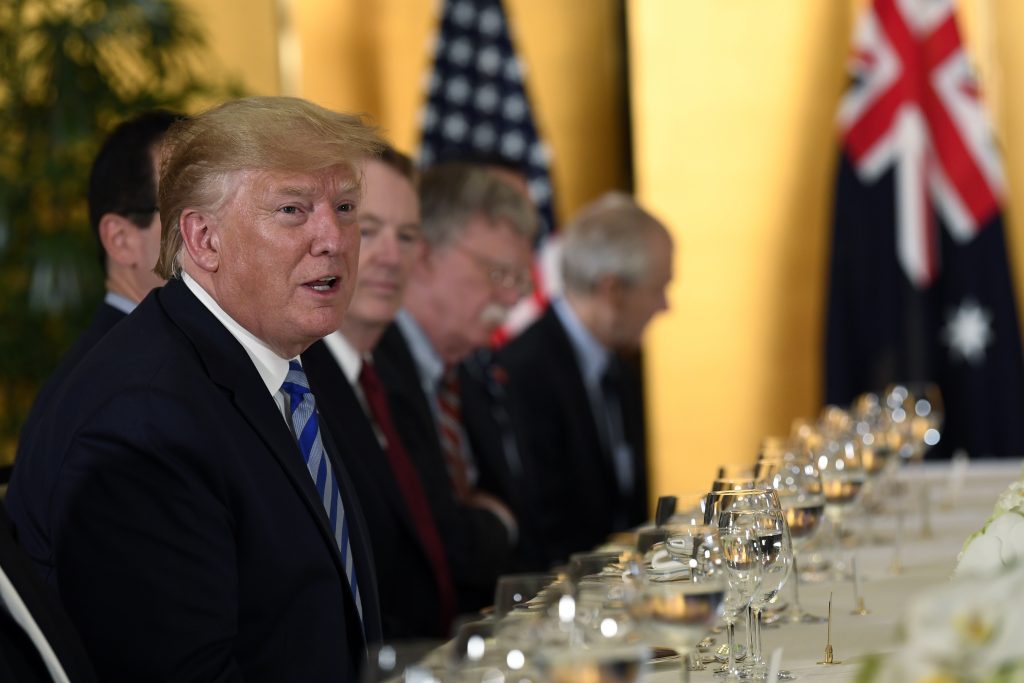 President Donald Trump began his most consequential overseas trip of the year on Thursday with a warm dinner with the prime minister of Australia, a friendly opening act before the impending gauntlet of negotiations on international crises, trade wars and a growing global to-do list.

President Trump landed in Osaka, Japan, for the annual Group of 20 summit amid a tropical cyclone that is predicted to turn into a typhoon — a possible metaphor for the four days of high-stakes diplomacy that lie ahead. As his re-election bid heats up, President Trump was eager to produce breakthroughs on a series of foreign policy challenges including the showdown between the U.S. and Iran, a trade war with China, the threat of fresh election interference by Russia and stalled nuclear talks with North Korea.

As he faces mounting pressures to deliver results, the president began his battery of meetings with world leaders with a dinner with Australian Prime Minister Scott Morrison.

The two men traded praise in the moments of the meal that were open to reporters and Trump said he would “like to” visit Australia later this year for the prestigious Presidents Cup golf tournament. When asked if his “America First” policies strained traditional alliances, President Trump insisted that the two nations “worked together very closely” on trade issues.

The agenda for his four days in Asia is as laden with hazards for the president as it is light on the ceremonial pomp that marked his recent state visits to Japan and the United Kingdom.

But White House officials are playing down prospects of specific accomplishments in what is the president’s third international trip in a month, even as President Trump himself said of his “competitors” from other nations: “That’s OK. We’re doing great. We’re doing better than any of them.”

The week was set up to deliver a remarkable split-screen dynamic in American politics: While President Trump is in Asia, the Democrats vying to replace him next year are holding their first primary debates. As Air Force One soared toward Japan, Trump delivered a succinct review on Twitter of part one of a two-night debate: “BORING!”

Later, the president, ever the media critic, repeatedly mocked NBC for an audio malfunction that briefly interrupted the proceedings.

The summit will be a test of both President Trump’s go-it-alone style as well as his “America First” doctrine that has frustrated traditional allies over disputes on defense spending and trade and set the United States apart from global consensus on how to deal with international concerns like climate change and Iran’s nuclear program.

The president, who has shown little patience for the subtleties of global interactions and whose administration has struggled to grapple with simultaneous challenges, left Washington days after pulling back from the brink of armed conflict with Iran and as he trades threats over its nuclear program and support for terror groups. With Iran threatening to breach uranium enrichment limits set in the 2015 nuclear accord as soon as Thursday, President Trump will be asked to articulate his strategy for containing Iran to skeptical world leaders after pulling the U.S. from the deal last year.

President Trump will also find himself face-to-face with Putin for the first time since Special Counsel Robert Mueller’s investigation ended without finding evidence that the Trump campaign criminally conspired with Russia during the 2016 election. It will also be their first meeting since their summit in Helsinki in July 2018, when President Trump declined to side with U.S. intelligence agencies over Putin on the question of election interference, leading to an uproar at home and abroad.

President Trump told reporters as he left the White House that he expects a “very good conversation” with Putin but added that “what I say to him is none of your business.” His aides have grown worried that President Trump may use the meeting to once again attack the Mueller probe, particularly since the special counsel now has a date to testify before Congress next month.

Last November, President Trump canceled a planned meeting with Putin at the G-20 in Argentina after Russia seized two Ukrainian vessels and their crews in the Sea of Azov, but the continued detention of the crewmembers does not appear to be deterring the leaders from meeting this time. Aside from Iran, the leaders are expected to discuss hotspots in Syria and Venezuela, as well as nuclear weapons.

White House officials said there are no plans for a meeting in South Korea between President Trump and North Korea’s Kim Jong Un, with whom the president has restarted diplomacy-by-correspondence since their failed Hanoi summit in March. But there was speculation that the president would make another attempt to travel to the Demilitarized Zone between the Koreas after fog prevented him from taking a helicopter there in November 2017.

President Trump is to speak with South Korean President Moon Jae-in about efforts to bring North Korea back to the negotiating table as the American holds out hope for an elusive legacy-making nuclear deal. Moon told The Associated Press and other news agencies Wednesday that the U.S. and North Korea are holding “behind-the-scenes talks” to arrange a third summit between the two leaders.

With Xi, a senior administration official said, President Trump’s top aim will be rebooting trade negotiations between the two countries after they collapsed earlier this year. In an interview with Fox Business Network on Wednesday, Trump threatened again to impose even stiffer tariffs on Chinese imports to the U.S. if talks remain stalemated. But officials in both nations are looking for an off-ramp as concerns mount about the economic impact of the yearlong trade war.

President Trump will also meet with the Saudi crown prince, who U.S. intelligence services concluded ordered the grisly killing of Washington Post columnist Jamal Khashoggi, a U.S. resident. Despite the killing, President Trump has continued to pursue a close relationship with Saudi Arabia, a linchpin to the U.S. Middle East strategy to counter Iran over its support of terrorist groups, its nuclear program and its role in furthering humanitarian disaster in Yemen’s civil war.

On the eve of the trip, President Trump showed a willingness to deliver broadsides at American allies, questioning the fairness of a mutual defense treaty with Japan, a bedrock of the two nations’ alliance, while also tweeting a complaint about the tariffs India has placed on U.S. goods.