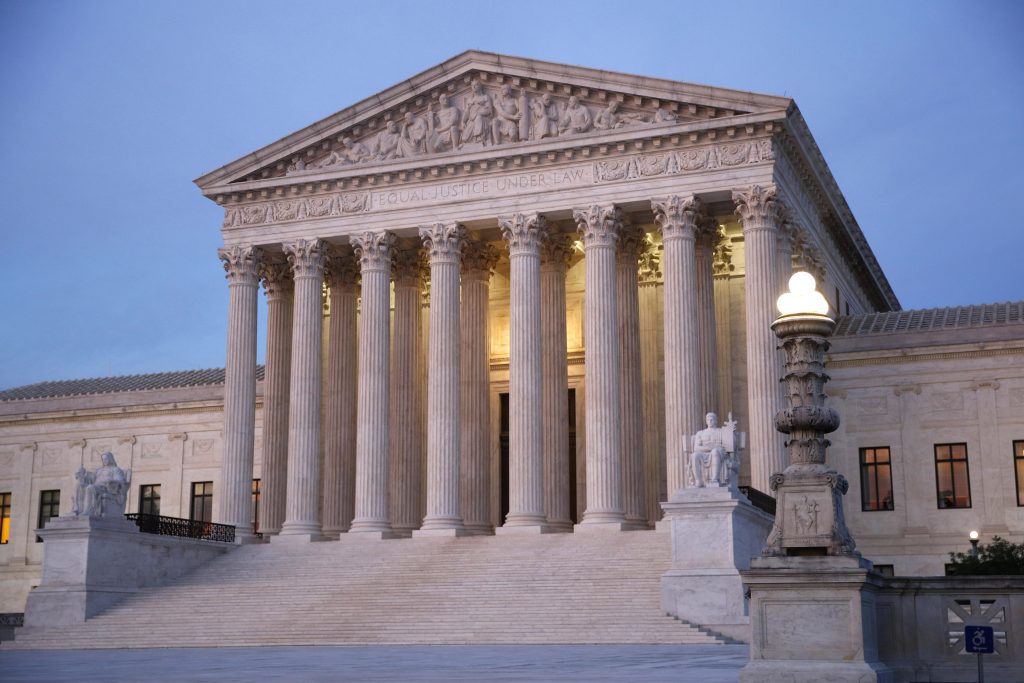 Religious-liberty advocates are hailing a Supreme Court ruling that a cross memorializing war dead can remain on government land.

The 7-2 decision, handed down last Thursday, is likely to have broad ramifications for religious items and images in the public square. Several Jewish groups that had submitted briefs in support of the memorial believe its preservation could help buttress the constitutionality of eruvin and the like, as well as reinforce a friendly posture toward faith groups in courts. The court’s opinion was an additional nail in the coffin of the “Lemon Test,” a rubric designed by a 1971 decision widely seen as restrictive of the interests of religious groups, and which has since then been inconsistently applied. Yet the decision did not directly address its implications beyond similar monuments.

The large memorial has faced challenges for years from the American Humanist Association (AHA), a radical secularist group which claimed its presence on state land constituted a government endorsement of religion.

Writing on behalf of the majority, Justice Samuel Alito noted that ordering the cross’ removal would signal less “neutrality” towards faith than would its preservation.

“A government that roams the land, tearing down monuments with religious symbolism and scrubbing away any reference to the divine will strike many as aggressively hostile to religion,” he said. “Militantly secular regimes have carried out such projects in the past, and for those with a knowledge of history, the image of monuments being taken down will be evocative, disturbing, and divisive.”

Justice Alito’s ruling was joined by four other members of what is seen as the court’s conservative bloc, as well as by liberal-leaning Justices Stephen Breyer and Elena Kagan.

Justice Ruth Bader Ginsberg penned an opinion in dissent which was joined by Justice Sonia Sotomayor, saying that “by maintaining the Peace Cross on a public highway, the Commission elevates Christianity over other faiths, and religion over nonreligion.”

Noted attorney Nathan Lewin had authored a brief supporting the monument’s preservation on behalf of The National Jewish Commission on Law and Public Affairs (COLPA) and several other Orthodox organizations, including Agudath Israel of America and the Rabbinical Council of America (RCA). Mr. Lewin told Hamodia that the large majority and the length of the opinion, which draws on a wealth of case law and historical facts, illustrates the importance with which the present court views matters affecting religious groups.

“I think it’s a very significant ruling that shows that the court now has a substantial majority that is solidly behind religious liberty,” he said.

The case revolved around the constitutionality of a memorial in Bladensburg, Maryland, a suburb of Washington D.C., constructed in 1925 in honor of 49 soldiers from the area who had been killed in the First World War. Funds for the structure, a 40-foot stone cross, were raised by the American Legion, who are named as defendants in the case together with the state, but the monument and the land on which the monument rests was acquired by Maryland in 1961 for practical reasons, because traffic in the area had increased and the plot of land was transformed into a road median.

During, and in the wake of, World War One, crosses became a widely used symbol to pay tribute to those killed, as immortalized in the poem “In Flanders Field.” The need to view the memorial beyond its religious overtones was noted by the court.

“After the First World War, the picture of row after row of plain white crosses marking the overseas graves of soldiers who had lost their lives in that horrible conflict was emblazoned on the minds of Americans at home, and the adoption of the cross as the Bladensburg memorial must be viewed in that historical context,” wrote Justice Alito.

The opinion also noted several secular examples of crosses, such as the Swiss flag and the emblem of the Blue Cross-Blue Shield insurance company.

Lower courts had differed over AHA’s call for the monument’s removal, and many hoped the cases’ appearance at the Supreme Court would be an opportunity to clarify guidelines on where the demarcation line is set for state “establishment” of religion, particularly vis-à-vis the “Lemon Test.”

The Supreme Court’s decision in Lemon v. Kurtzman created the test, which set out three standards by which to determine the constitutionality of government aid or actions related to religious groups: It must serve a secular purpose, neither advance nor impede religion, and not involve “excessive entanglement with religion.” Yet, since then, many feel the test has been applied inconsistently, leading the late Justice Antonin Scalia to famously refer to it as a “ghoul…that repeatedly sits up in its grave and shuffles abroad, after being repeatedly killed and buried.”

The court’s opinion said that Lemon had fallen short in several cases similar to the present one, largely due to its inability to deal with symbols in context, and called for a more pragmatic approach.

“While the Lemon Court ambitiously attempted to find a grand, unified theory of the Establishment Clause, in later cases, we have taken a more modest approach that focuses on the particular issue at hand and looks to history for guidance.”

Howard Slugh, an attorney who authored a brief on behalf of a group known as the Jewish Coalition for Religious Liberty, brought attention to the Bladensburg cross’ potential ramifications for eruvin, sukkahs, and the like. He told Hamodia that the ruling should be yet another means of stopping those who challenge the legality of eruv wires on the grounds that a town’s allowing them on utility poles constitutes an “endorsement” of religion.

“It seems pretty clear, based on this, that if an eruv case would find its way to the Supreme Court, that the eruv would win by at least seven votes,” he said. “One of the strongest parts of the opinion is that while you cannot favor religion, you also can’t treat it poorly, and while the Justices did not kill Lemon, the trajectory seems very good for religious liberty.”

The effects of the Lemon Test go well beyond symbols, and have stymied many potential avenues for state aid to religious schools. The Lemon case itself involved a Pennsylvania program that provided reimbursement to religious institutions for the salaries of teachers who taught secular subjects.

Several of the present court’s more conservative Justices, in separate concurring opinions on the cross, showed a readiness to jettison the standard entirely, with Justice Clarence Thomas writing that “it is our job to say what the law is, and because the Lemon test is not good law, we ought to say so.”

Yet, Justice Kagan, also in a separate concurrence, rejected “rigid application of the Lemon test,” but said that its “focus on purposes and effects” remains important, and neither she nor Justice Breyer joined multiple sections of the majority opinion criticizing the test.

Still, Mr. Lewin said that while the present opinion would have no bearing on Lemon’s application to funding issues, he felt it signaled a far more friendly application and could pave the way to a broader take-down in the future.

“This clearly says that the Establishment Clause will no longer continue to be invoked against Jewish religious interests, as it was in the time of the Warren Court and the early years of the Burger Court.” He said, “I am hopeful that, based on the majority and concurring opinions, Lemon v. Kurtzman will soon be totally overruled. If so, government funding for secular teachers of subjects like chemistry and math at yeshivas could be found constitutional by the Supreme Court.”