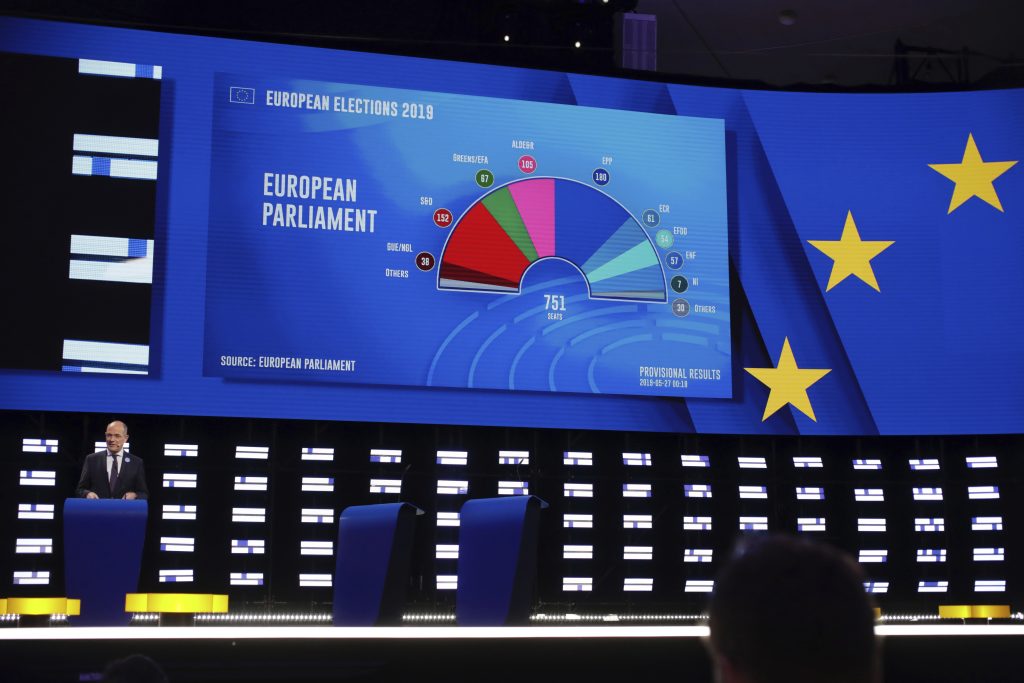 Europeans woke Monday to a new political reality after European Parliament elections ended the domination of the EU’s main center-right and center-left parties and revealed a changed political landscape where the far-right, pro-business groups and environmentalists will be forces to be reckoned with.

Turning out in numbers not seen for 20 years, voters took their concerns about immigration and security to the ballot box, making parties led by the likes of Italy’s populist Matteo Salvini and France’s far-right leader Marine Le Pen among the biggest in the 28-nation bloc’s assembly.

“The rules are changing in Europe,” Salvini, Italy’s hard-line interior minister, said at his League Party headquarters in Milan early Monday. “A new Europe is born.”

Voter projections showed the League won 33% of the vote, up from just 6% at the last European vote in 2014.

The lion’s share of Britain’s seats went to Nigel Farage’s Brexit Party, as citizens punished the governing conservatives and opposition Labour Party for their embarrassing failure to manage the divided country’s delayed departure from the EU.

The picture of a fractured assembly for the next five years was complete as many citizens turned their backs on the center-right European People’s Party — one of its key figures, German Chancellor Angela Merkel, saw her party lose ground — and the center-left Socialists.

“We are facing a shrinking center of the European Union Parliament,” a subdued EPP lead candidate Manfred Weber said, after just over 50% of the EU’s more than 400 million voters had turned out over four days in the world’s biggest transnational elections. “From now on, those who want to have a strong European Union have to join forces.”

The Socialist lead candidate, Frans Timmermans, essentially conceded defeat, even though the two groups remain the assembly’s biggest by some margin.

“If you lose an election, if you lose seats, you have to be modest,” the former Dutch foreign minister said. “We have lost seats and this means that we have to be humble.”

Spanish caretaker Prime Minister Pedro Sanchez was a notable exception, as his victorious Socialists looked set to win 20 of the country’s 54 seats in the European Parliament.

Although still trickling in, results show that the EPP is set to secure 179 seats, down from 217 five years ago. The Socialists are slated to win 150, down from 187.

The two parties have dominated the Parliament with a combined majority since elections were first held in 1979. Senior figures from the EPP hold the top posts in the EU’s three main institutions: Parliament president, head of the EU’s powerful Executive Commission and European Council president, who chairs summits of European presidents and prime ministers.

While real power in Europe remains in the hands of the 28 member states, the assembly’s influence has grown. It has helped improve air flight safety in Europe, cut down on plastics use, end mobile telephone roaming charges inside the bloc, boost data privacy, and cut carbon dioxide emissions from cars.

The Parliament also has an important say in international treaties ranging from trade talks to Brexit.

But now new, uncomfortable alliances must be forged. The pro-business liberals, or ALDE, backed by French President Emmanuel Macron — whose Republic on the Move Party is set to win 23 seats, the same number as Le Pen’s National Rally — insist that Europe’s traditional political certainties are a thing of the past.

“The monopoly of power has been broken,” said ALDE lead candidate Margrethe Vestager, currently the EU’s competition commissioner, describing Sunday’s polls as “a signal for change.”

Party group leaders begin their horse-trading Monday to see what kind of stable alliance can be established and who might secure the EU’s top jobs. Their decisions will set the stage for EU leaders, who meet over dinner Tuesday to see where the political pieces lie and discuss potential candidates.