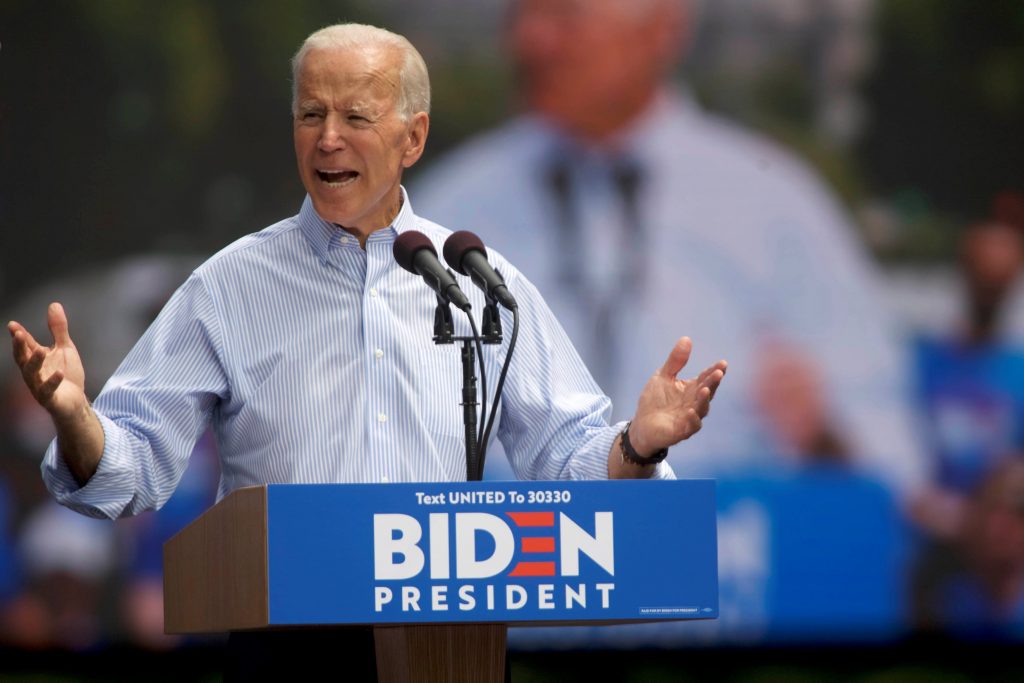 At Joe Biden’s May 18 campaign kickoff rally in Philadelphia, the Democratic presidential contender said “President Trump inherited an economy from the Obama-Biden administration” that Trump is now “in the process of squandering.”

Can’t blame Biden for trying to polish up the record of the years when he served as vice president, but – seriously? Democrats continually try to diminish the current administration’s economic achievements by suggesting that Trump was handed a booming economy in 2016. Biden in particular seems likely to hit that theme throughout his campaign. And he’ll be just as wrong next year as he is today.

For example, soon after Trump took office in January 2017 and the administration forecast 3 percent growth in gross domestic product (the most widely accepted measure of economic health), former Obama administration economist Lee Branstetter said it was “essentially mathematically impossible to get the growth they’re talking about.” A few weeks later, Jason Furman – a former chairman of President Barack Obama’s Council of Economic Advisers – predicted a decade of GDP growth “around 2 percent a year.”

What else could they say? The Obama-Biden White House had forecast GDP growth in the 4 percent range coming out of the 2008 financial crisis and recession, consistent with the 4.3 percent average in the other 10 post-World War II recoveries. The Obama administration never had a calendar year of even 3 percent; in the post-recession period, the average was 2.1 percent.

Before the tax cuts were passed, Nancy Pelosi, D-Calif., predicted “Armageddon.” But, one year later, as GDP growth soared, unemployment declined to a 50-year low and working-class wages increased at the fastest rate in a decade, the best the Democrats could do was claim the tax cuts were a “sugar high” and that, rather than a 2018 economic collapse, America faced a 2019 recession.

Beyond the stark difference between Obama-era GDP and today’s, let’s consider the boom in job creation spurred by that accelerated growth. When Obama left office, the economy had 2 million more people unemployed than job openings. In March, the most recent month for which the data are available, after 25 months of the Trump administration, there were 1.3 million more job openings than people unemployed. And that is with the unemployment rate at a 50-year low and more people working than at any time in the nation’s history.

March was the 13th consecutive month the U.S. economy produced more job openings than there were people unemployed. The first time that happened since the Bureau of Labor Statistics began reporting the data in 2000 was, well, 13 months ago. It didn’t happen once during the Obama administration.

Let’s look at what Obama-Biden bequeathed to the Trump administration on wages. When they took office in January 2009, wages were growing at 3.6 percent – and that was during the recession. By May of that year, the number had dipped to 2.9 percent. There was not a single month throughout the remaining 91 months of the Obama administration when wage growth hit even 2.9 percent – and only two months when it managed to hit 2.8 percent. When Obama-Biden left office in January 2017, wage growth was 2.4 percent. That is their legacy on wages.

With employers in the Trump era competing for workers to fill plentiful job openings, the country in April experienced its ninth straight month of wage growth at or above 3 percent. A recent survey of economists found that nearly 70 percent expected even faster wage growth over the coming year.

As the economy grows and wages rise, tax revenue is also increasing because of – not despite – the Republican tax cuts. Through the first seven months of this fiscal year, revenue is up 7 percent over the same period in fiscal 2016 (the last full fiscal year before the tax cuts). Unfortunately, spending has increased by 13 percent. As has been the case throughout the post-recession period, the United States has a spending problem. Despite increased tax revenue, the federal debt continues to grow and remains an issue that must be addressed no matter who sits in the Oval Office.

Nonetheless, given the meager Obama-Biden economic legacy, claims that the Republican tax cut was an unnecessary stimulus in an already improving economy fall flat. The Trump administration’s policies have finally produced the economic benefits that American workers should have experienced coming out of the recession but did not.

You almost have to feel sorry for Joe Biden, running against such compelling economic success. His election hopes hinge on persuading voters to believe a fairy tale about the stellar Obama-Biden economy now in danger of being squandered by Trump. Biden is reputedly good at retail politics, but even for him, that will be a tough sell.