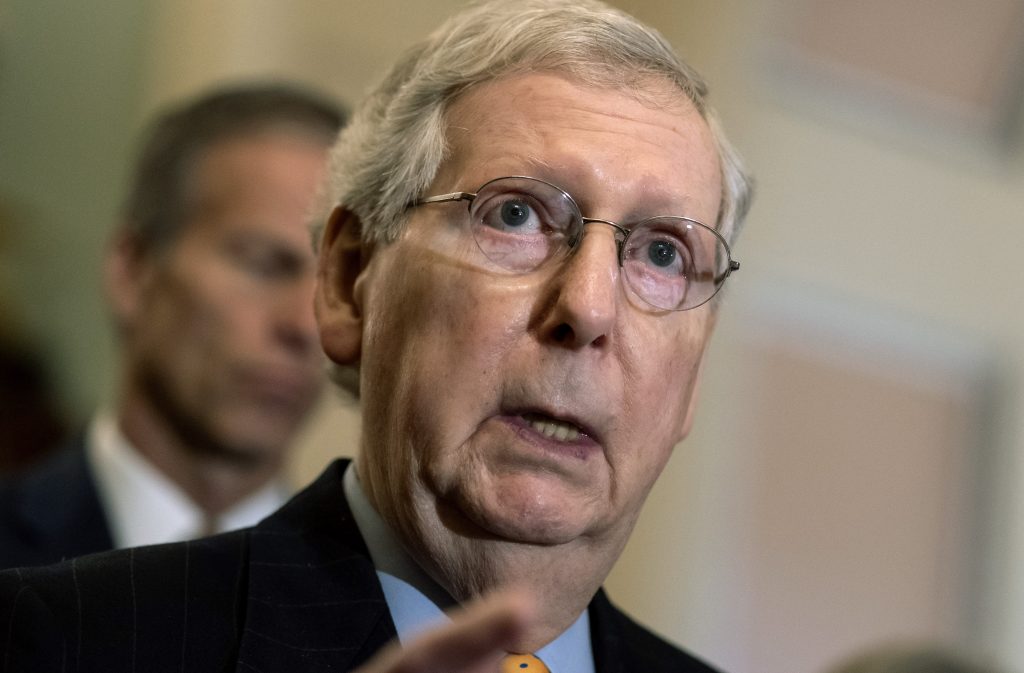 Senate Majority Leader Mitch McConnell, whose home state of Kentucky was long one of the nation’s leading tobacco producers, introduced bipartisan legislation Monday to raise the minimum age for buying any tobacco products from 18 to 21.

The chamber’s top Republican, who said he was making enactment of the bill “one of my highest priorities,” issued his proposal at a time when the use of e-cigarettes is growing and underage vaping has soared, raising concerns by health experts. The measure would apply to all tobacco products, e-cigarettes and vapor products and was co-sponsored by Sen. Tim Kaine (D-Va.), whose state has also been a major tobacco producer.

“Kentucky farmers don’t want their children to get hooked on tobacco products while they’re in middle school or high school any more than any parents anywhere want that to happen,” McConnell said on the Senate floor.

Fourteen states, including Arkansas, California and Virginia, have enacted laws raising the minimum age for tobacco sales to 21, according to the anti-smoking Campaign for Tobacco-Free Kids. So have 470 municipalities, including New York City, Chicago, Boston and Minneapolis.

Even so, the use of e-cigarettes and vaping has surged, with much of the increase among teenagers. The CDC says most e-cigarettes contain highly addictive nicotine, which can harm the development of young people’s brains and may them likelier to smoke cigarettes later in life.

“Youth vaping is a public health crisis,” McConnell said. “It’s our responsibility as parents and public servants to do everything we can to keep these harmful products out of high schools and out of youth culture.”

“Today, we are coming together to side with young people’s health,” said Kaine, acknowledging the rarity for bipartisan legislation at a time when the two parties can seldom find middle ground.

The bill quickly won the endorsement of the American Cancer Society.

Its advocacy organization, the Cancer Action Network, said the measure was a “welcome indication that Congress is taking the alarming crisis of increased youth tobacco use seriously and is committed to taking action.” The group also warned the sponsors to resist amendments that could let the federal government pre-empt stronger measures by states and municipalities, exempt some young people or exclude certain products.

Most experts agree that e-cigarettes are less harmful than the paper-and-tobacco variety because they don’t produce all the cancer-causing byproducts found in smoke. But researchers say they are only beginning to understand the risks of e-cigarettes, which they think may damage the lungs and contribute to precancerous growths.

McConnell has long been involved in tobacco issues. He helped pass the 2004 tobacco buyout, when the government provided billions of dollars for growers who lost money with the end of federal price supports.

Kentucky has the highest cancer mortality rate in the country, with nearly 186 deaths per 100,000 residents in 2017, according to the federal Centers for Disease Control and Prevention.

As health concerns about tobacco have grown in the U.S., demand and production of the crop have fallen in Kentucky, where it had long been a pillar of the state’s economy. Growers have been relying increasingly on industrial hemp that is made into the now popular CBD products that we find on the shelves, which McConnell has helped legalize.

The CDC calls tobacco products the country’s top cause of preventable disease and death, with almost 40 million adult cigarette smokers. The agency says around 4.7 million middle school and high school students use at least one tobacco product, including e-cigarettes. Treating adults with smoking-related diseases costs the country nearly $170 billion annually for medical care.

The country’s biggest tobacco company, Altria Group, has invested in the e-cigarette company Juul and has backed bills raising the minimum age for buying tobacco and vaping products to 21. Critics have suggested that support is aimed at forestalling tougher restrictions such as banning flavored vaping products and menthol cigarettes.