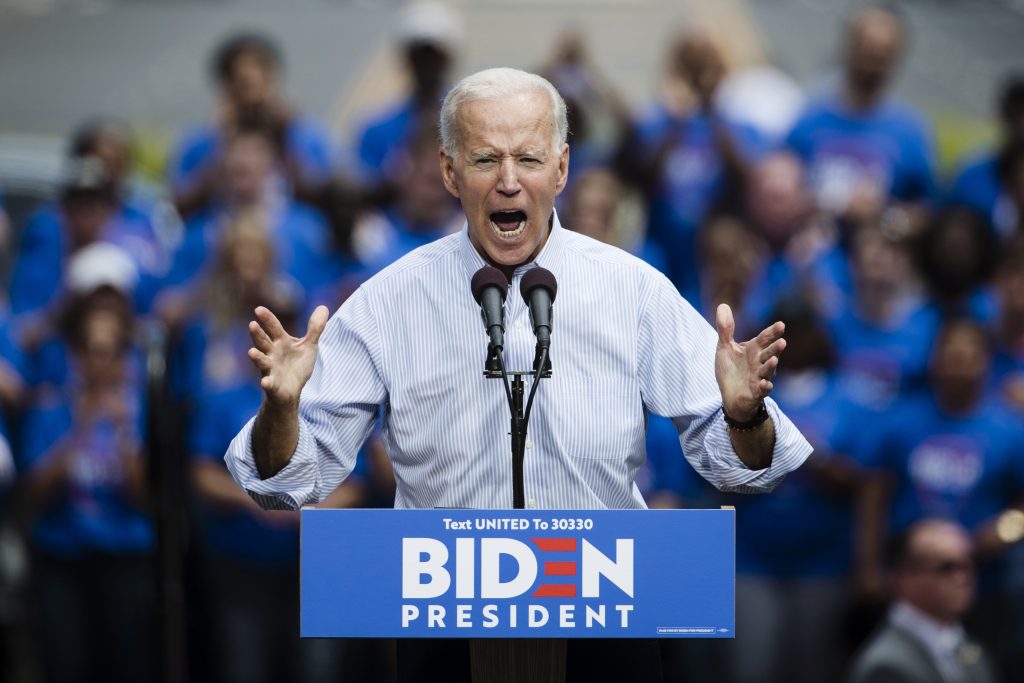 His party may be enraged by Donald Trump’s presidency, but Democratic presidential candidate Joe Biden insisted Saturday that Democrats will not defeat the Republican president if they pick an angry nominee.

Facing thousands of voters in his native Pennsylvania for the second time as a 2020 contender, the former vice president offered a call for bipartisan unity that seemed far more aimed at a general election audience than the fiery Democratic activists most active in the presidential primary process. He acknowledged, however, that some believe Democrats should nominate a candidate who can tap into their party’s anti-Trump anger.

Biden’s moderate message highlights his chief advantage and chief liability in the early days of the nascent presidential contest, which has so far been defined by fierce resistance to Trump on the left and equally aggressive vitriol on the right. Biden’s centrist approach may help him win over independents, but it threatens to alienate liberals who favor a more aggressive approach in policy and personality to counter Trump’s turbulent presidency.

“I want aggressive change. I’m not hearing that from him yet,” said 45-year-old Jennifer Moyer of Blandon, Pennsylvania, who attended Biden’s rally and said she’s 90% sold on his candidacy. “I don’t want middle of the road.”

The event was the culmination of a three-week campaign rollout that began and ended in Pennsylvania, home to Biden’s campaign headquarters and where he was brought up. The 76-year-old native of working-class Scranton, Pennsylvania, has climbed to the front of the crowded primary field, in part by ignoring his Democratic rivals and focusing on his ability to compete with Trump head-to-head next year.

In the fight to deny Trump reelection, no states will matter more than Pennsylvania, Michigan and Wisconsin, three states the Republican president carried by razor-thin margins in 2016.

Biden is betting big that voters in the Midwest and beyond will ultimately embrace his optimistic appeal.

Biden’s campaign security team estimated that the Saturday event, which closed down a Philadelphia thoroughfare and attracted a huge police presence, drew an estimated 6,000 people. Compared with events held by some of his top rivals — and certainly Trump’s rallies — the crowd was large, but not overwhelming.

Some in his party’s energized left wing, watching from afar, were skeptical of Biden’s strength atop the field and his message of unity.

“It’s hard to imagine how Joe Biden is not angry,” said Adam Green, co-founder of the liberal group known as the Progressive Change Campaign Committee, which has long supported Elizabeth Warren’s presidential ambitions.

“Has he been living in the Trump era? Kids are being torn away from their mothers’ arms at the border,” Green continued. “It’s completely legitimate to have righteous outrage at this horrible Trump moment in history, and to want a candidate who will channel that anger toward positive change.”

It was easy to see signs of anger in recent days as Biden courted Democratic primary voters in Iowa, New Hampshire and South Carolina as part of his inaugural national tour. At a house party in New Hampshire earlier in the week, Biden took a question from a woman who called Trump “an illegitimate president” and said he should be impeached.

Biden jokingly asked if she’d be his running mate, before shifting the conversation to another topic. A spokeswoman later said Biden does not believe Trump is an illegitimate president.

Ahead in the polls in the early days of the 2020 contest, Biden is unlikely to embrace a more aggressive approach in the near future.

Referencing the health care fight under former President Barack Obama, he noted Saturday that he knows how to win “a bare-knuckle fight,” but later added, “We need to stop fighting and start fixing.”

“If the American people want a president to add to our division, to lead with a clenched fist, closed hand and a hard heart, to demonize the opponents and spew hatred — they don’t need me. They’ve got President Donald Trump,” he continued. “I am running to offer our country — Democrats, Republicans and independents — a different path.”

Before he took the stage, longtime admirer Bradley Skelcher, of Smyrna, Delaware, praised the former vice president’s optimistic message. But he described himself as “… angry” about the Trump presidency.

“We need calm. You don’t want anybody like me running the country,” Skelcher said. “Somebody needs to calm us down a little.”