National Pompeo to Meet With Putin, Striving Against Odds for Better Relations
National 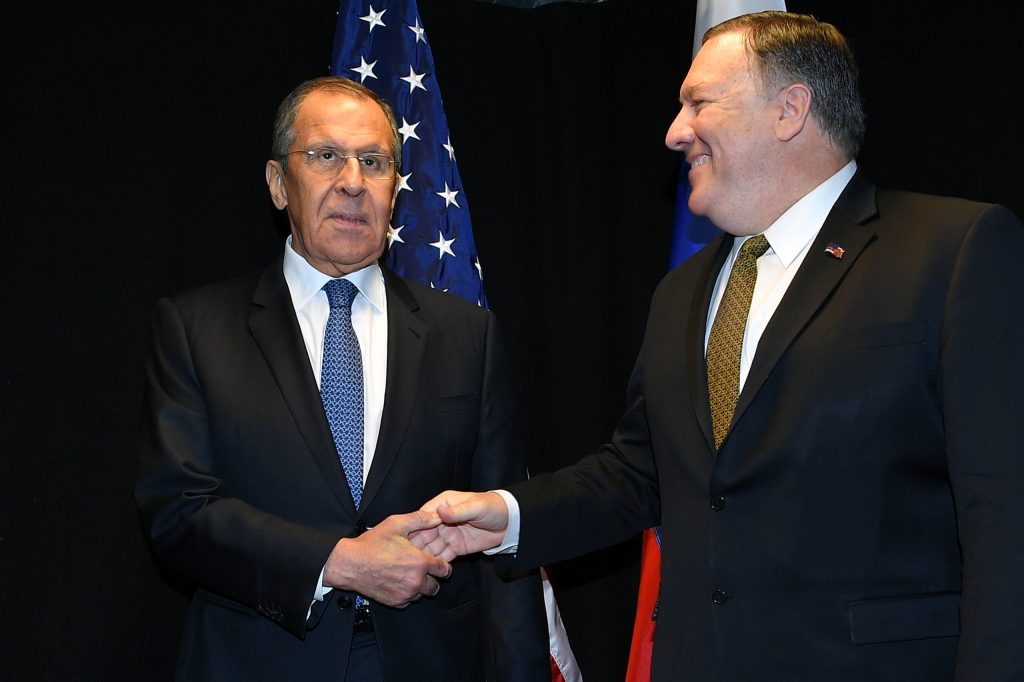 Secretary of State Mike Pompeo will raise a host of issues dividing the United States and Russia when he meets with Russian President Vladimir Putin on Tuesday, but their conversation is expected to accomplish little beyond the airing of opposing views.

In an indication that little concrete progress is expected when Pompeo meets with Putin and Foreign Minister Sergei Lavrov, State Department officials say the meeting is “an opportunity to take the conversation to a higher level.”

The White House and the Kremlin do not see eye to eye on several issues, including Venezuela, Iran, Syria, North Korea, Ukraine, arms control agreements, and Russian interference in elections in the United States and other countries. Pompeo has chastised Russia on these issues repeatedly, but to little effect.

“We are not going to solve these issues overnight, but . . . we have to be engaging to create opportunities for progress,” a State Department official told reporters in advance of Pompeo’s departure. The official said they are taking a “realistic approach” to a full range of disagreements that have undermined U.S.-Russian relations.

Pompeo is scheduled to fly Tuesday morning from Brussels to Sochi, the Black Sea resort where President Putin has a summer home.

Pompeo and his entourage arrived Monday in Brussels, home of the European Union, after canceling a planned stop in Moscow for largely ceremonial events. The foreign ministers of Britain, France, Germany and the EU were holding a sudden “Iran crisis” meeting to decide how to respond to the growing tension between Washington and Tehran.

Even as Pompeo arrived in Brussels, tensions in the Middle East surged again when Saudi Arabia said two of its oil tankers were attacked and damaged in an “act of sabotage.” Saudi officials did not say who was responsible; Saudi Arabia and Iran are regional rivals.

As the Trump administration has ratcheted up sanctions against Iran, banning most of its oil exports, Iranian President Hassan Rouhani has threatened to stop complying with the 2015 nuclear deal unless Europe finds a way to get around the punishments. The landmark agreement, which gave Iran sanctions relief in exchange for limits on its nuclear program, was also negotiated with the European nations, Russia and China. They all want to keep the deal alive and resent being caught in the middle because of the hard-line approach adopted by President Trump.

Pompeo gave European officials a few hours’ advance notice that he was coming uninvited to their Brussels meeting. Rather than allowing him to address the group as a whole, they scheduled a series of bilateral meetings with each of the diplomats in what was widely interpreted as a snub.

The trip to Sochi marks Pompeo’s first visit to Russia since becoming secretary of state, and it comes just weeks after the release of the Mueller report on Russia’s interference in the 2016 U.S. presidential election.

“President Trump’s asked me to go to Russia,” Pompeo said in a CNBC interview. “We have lots of places where I hope we can find overlapping interests with Russia. And it may be the case that we can’t, where we can’t, we’ll go our own ways. But it’s important.”

Trump and Pompeo have both expressed their desire to improve relations with Russia and to find areas where they can work together. But Trump has been more hesitant to criticize Putin, whom he spoke with last week.

Pompeo has been harsher, most recently blaming Russia for talking Venezuelan President Nicolas Maduro out of fleeing his country and acting aggressively to militarize the Arctic. He told CNBC it was “crazy talk” to say the United States has not been tough on Russia. But Foreign Policy reported that the State Department took down from its website a strong statement praising the conviction of two Russian intelligence agents in Montenegro, because Pompeo wanted to soften his criticism of Russia ahead of meeting Putin.

But most expectations are that the meeting Tuesday will be all talk, with no action coming from it.

“I do not see any movement on any of the core issues coming out of the meeting,” said Alina Polyakova, a Russia analyst at the Brookings Institution. “Given the numbers of competition and conflict between the United States and Russia, this meeting will not move the needle.”

Pompeo may lay some of the groundwork for a possible meeting between Putin and Trump at the G20 meeting in Osaka, Japan, in June. The State Department, however, declined to address whether the presidents would have another summit, or whether Pompeo and Putin would even mention it.

“On substance, there’s no issue that looks ripe for presidential level discussion,” said Andrew Weiss, a Russia analyst with the Carnegie Endowment for International Peace. “What we instead are likely witnessing is that Trump wants another meeting and has very little stake in traditional diplomatic preparation.”