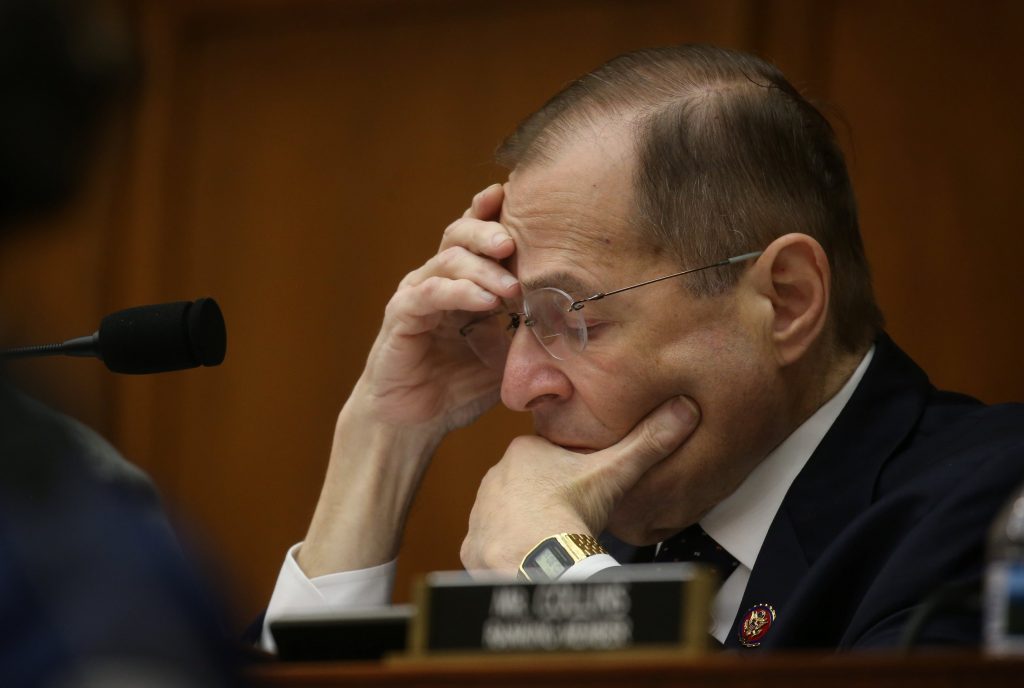 A Democratic-led House panel on Wednesday approved a measure to hold Attorney General William Barr in contempt for refusing to hand over an unredacted copy of the Mueller report on Russian election interference even as President Donald Trump invoked the legal principle of executive privilege to block its disclosure.

Throwing down another challenge to Trump, the House of Representatives Judiciary Committee voted to recommend that the full House cite Barr, the top U.S. law enforcement official and a Trump appointee, for contempt of Congress after he defied its subpoena for the complete report and underlying evidence.

“We are now in a constitutional crisis,” Jerrold Nadler, the committee’s Democratic chairman, told reporters after the panel approved the contempt resolution on a party-line 24-16 vote, with Democrats in favor and Republicans opposed.

The confrontation escalated a clash between the Democratic-controlled House and Republican president over congressional authority under the Constitution to investigate him, his administration, his family and his business interests.

The vote came hours after the White House took its own provocative step, asserting executive privilege to block the release of Special Counsel Robert Mueller’s full report on Russian actions to boost Trump’s candidacy in the 2016 U.S. election and related evidence such as investigative interviews.

“It is deeply disappointing that elected representatives of the American people have chosen to engage in such inappropriate political theatrics,” Justice Department spokeswoman Kerri Kupec said, adding that no one will force the department “to break the law” by handing over documents that cannot be disclosed such as secret grand jury material.

A House vote to hold Barr in contempt was likely to trigger a court battle, with fines and possible imprisonment at stake for him. Nadler said the full House vote would come “rapidly,” without being more specific.

Executive privilege is only rarely invoked by U.S. presidents to keep other branches of government from getting access to certain internal executive branch information. Trump had not previously taken such a step in his showdown with Congress.

The White House said Democrats forced the move. “Faced with Chairman Nadler’s blatant abuse of power, and at the attorney general’s request, the president has no other option than to make a protective assertion of executive privilege,” White House spokeswoman Sarah Sanders said.

Nadler said Trump’s stonewalling of Congress in various investigations is “an assertion of tyrannical power by the president and that cannot be allowed to stand,” though the congressman tiptoed around the question of launching the impeachment process to try to remove Trump from office.

In a letter to Nadler, Assistant Attorney General Stephen Boyd said Barr could not comply with the subpoena “without violating the law, court rules, and court orders, and without threatening the independence of the Department of Justice’s prosecutorial functions.”

Trump is stonewalling numerous probes by House Democrats, ranging from Mueller’s inquiry to matters such as his tax returns and past financial records.

Contempt of Congress is an offense that can be enforced several ways, most likely by a civil lawsuit, which could lead to a judge ordering imposing daily fines on the defendant or even arrest and imprisonment, according to legal experts.

The next step will be a floor vote by the full House. No action in the Republican-led Senate is needed.

Barr, who released a 448-page redacted version of the report on April 18, missed two deadlines to turn over the requested material after Nadler last month subpoenaed it. Nadler said lawmakers need the material to determine whether Trump obstructed justice by trying to impede Mueller’s inquiry.

“Every single day the president is making the case. He’s becoming self-impeachable,” Pelosi told The Washington Post. Pelosi added that Barr, who last week also refused to testify before the House panel, should be held in contempt of Congress. She last week accused Barr of committing a crime by lying to lawmakers.

Trump has filed lawsuits meant to block House subpoenas seeking some of his financial and business records, and his administration refused to disclose his subpoenaed tax returns. In a letter obtained by Reuters last week, White House legal counsel Emmet Flood asserted that Trump has the right to instruct his advisers not to testify before congressional oversight probes related to the Mueller investigation.

In a lengthy Judiciary Committee meeting, Republicans condemned the move to hold Barr in contempt. “What a cynical, mean-spirited, counterproductive and irresponsible step,” said Doug Collins, the panel’s top Republican. Other Republicans accused Democrats of paving the way for impeachment.

Democrats said the Trump administration waived executive privilege when it allowed some senior Trump advisers, including former White House Counsel Don McGahn, to talk to Mueller’s team during the investigation. The Justice Department said allowing such cooperation did not mean Trump relinquished the right to assert executive privilege now.

When the House was controlled by Republicans, it voted in 2012 to hold Eric Holder, attorney general under Democratic President Barack Obama, in contempt for failing to turn over subpoenaed Justice Department documents about a gun-running investigation. It was the first time Congress had held any Cabinet member in contempt.

A 1974 Supreme Court ruling made clear the contours of the doctrine of executive privilege. In the case U.S. v. Nixon, President Richard Nixon was ordered to deliver tapes and other subpoenaed materials to a judge for review. The Supreme Court ruled 9-0 that a president’s right to privacy in his communications must be balanced against the power of Congress to investigate and oversee the executive branch. Nixon resigned as president.

Mueller’s report detailed extensive contacts between Trump’s campaign and Moscow, as well as the campaign’s expectation of benefiting from Russia’s efforts to tilt the election in Trump’s favor. But Mueller concluded there was insufficient evidence to show a criminal conspiracy between Russia and the campaign.

The report also described numerous actions by Trump to try to impede Mueller’s investigation, but Mueller offered no conclusion on whether Trump committed criminal obstruction.