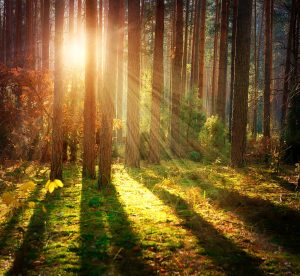 Three miles is a long way to hike, just to enjoy a “square inch of silence,” but that’s exactly what Gordon Hempton, founder of Quiet Parks International, did. But given the fact that — in his work recording rare nature sounds — he has circled the globe three times over the past 37 years, perhaps it’s really not much. According to an online news source, Hempton has recently announced the establishment of Zabalo River, Amazon Rainforest as the world’s first certified “Quiet Park,” and he says it was discovering that “square inch of silence” back in 2005 that first spurred him to embark on his mission to establish quiet parks the world over. He was exploring the Hoh River Valley in Washington, and it took a full three miles to fully escape from the sounds of the nearby roads.

Now, having written “More Noise Please” for Pesach’s Features edition, this discussion seems ironic. But I think something that occurred to me during the Seder ties all these pieces together. When we got to the part of Maggid that says “va’nitz’ak” (“and we screamed out”), I mentioned to my family that there are those who say that it’s an opportune time to cry out to Hashem in a full-throated scream and beg for whatever it is that your heart yearns. Of course, I was hoping that, in addition to the power of the tefillah and segulah, all the shouting would inject a nice boost of liveliness into the Seder (it was lively, but I always try to “go big”), but it kind of fell flat. Apparently, we must not be the yell-out-your-davening types, and nobody seemed to be eager to do the “va’nitz’ak” thing.

I was ready to move on, but, suddenly, I was struck with a memory. I remembered once hearing or reading that Harav Shimshon Pincus, zt”l, said that tze’akah (crying out in a yell) is indeed one of the forms of tefillah, but that it can be done in the recesses of one’s own mind. In other words, you can scream out to Hashem without anyone hearing you! You are crying out to Hashem with the full intensity and figurative decibel level of a scream, but it is going on only inside your own mind and heart, so that only Hashem — and no-one else — can hear it. Well, that made all the difference in the world! When they heard that, my family members became willing participants in the “va’nitz’ak” exercise.

So you see, sometimes we may be in search of noise, but we really don’t have to go anywhere to reach it. Not even outside the confines of our own minds. Instead of reaching out to achieve the state of tze’akah, we can reach in.

And perhaps the same is true for quiet.

Yes, it is certainly understandable that we often feel a need to escape from all the noise, but — barring situations where we have no choice but to physically protect ourselves (like weddings where the music is so loud that you wonder if you will still have eardrums by the time you go home) — it can be empowering to know that we may just possess the ability to achieve the state of quiet we are seeking by reaching in instead of reaching out.

There is a story I once read about a certain Gadol (unfortunately, I do not recall who the Gadol was) who was in the midst of Shemoneh Esrei when a gun was shot right next to him. The Gadol did not flinch, but simply carried on with his Shemoneh Esrei.

Those who witnessed the remarkable event were convinced that it was not that the Gadol heard the noise and simply controlled himself nonetheless; rather, he was so engrossed in his tefillah that he simply did not hear it.

Of course, that is a description of an exceedingly lofty level of concentration, and not one that average people can hope to achieve. But it does seem to underscore the point that accessing a world of inner quiet is something that is humanly possible. And even if we cannot do so in the face of overwhelming noise such as blasts or nearby airplane engines, perhaps we can try it when it comes to other, less intense forms of noise.

For example, imagine you are davening Shemoneh Esrei, and the person behind you is davening just a little bit too loudly. Sure, he is whispering, but it is louder than it should be. If you can discuss it with him (after davening!), and you think the conversation will go well, by all means go ahead and do so. But what if you don’t think he would be so receptive? Or what about noise such as grandkids (or kids) making a ruckus? Or your neighbor’s renovations?

No, no-one can blame you if such things simply bother you (and, believe me, I can relate!) and you try to avoid them as much as possible. But, perhaps we can try something different. The next time we feel the need for quiet, let’s try to reach in to achieve it instead of reaching out.