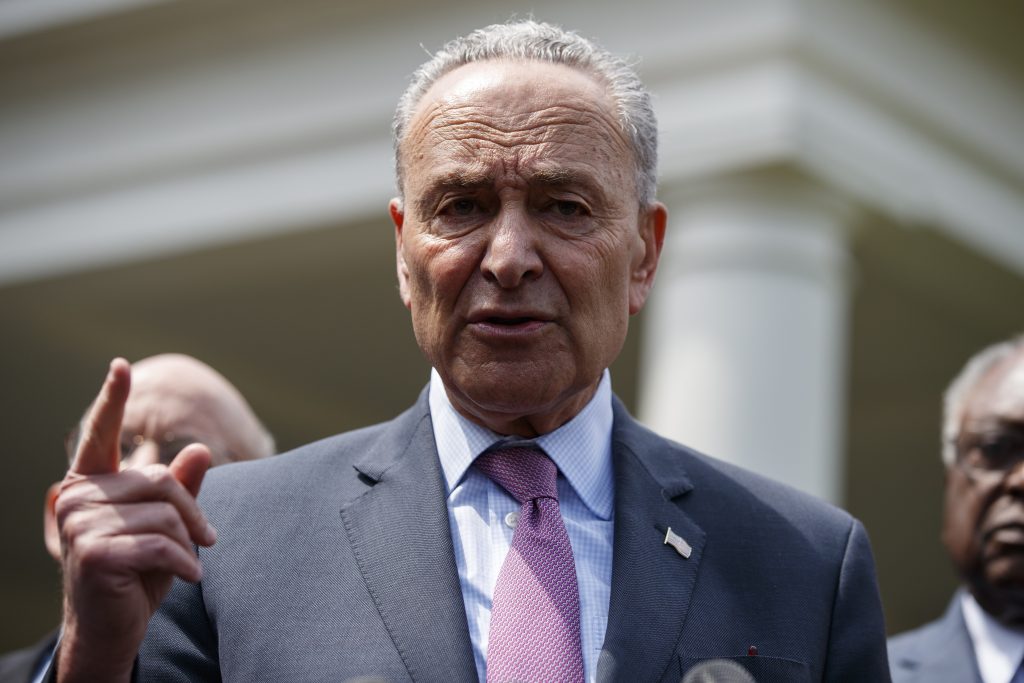 President Donald Trump and Democratic congressional leaders agreed Tuesday to work together on a $2 trillion infrastructure package — but put off for later the difficult question of how to pay for it.

Senate Minority Leader Chuck Schumer said there was “good will in the meeting” — a marked departure from the last meeting between Trump, Schumer and House Speaker Nancy Pelosi, which ended with President Trump walking out in a huff. Schumer said the two sides agreed that infrastructure investments create jobs and make the United States more competitive economically with the rest of the world.

Most importantly, Schumer said, “we agreed on a number.”

“Originally, we had started a little lower. Even the president was eager to push it up to $2 trillion, and that is a very good thing,” Schumer said.

Added Pelosi: “We did come to one agreement: that the agreement would be big and bold.”

Pelosi and congressional Democrats had asked for the meeting with Trump to discuss launching an ambitious building program that’s a top priority for the party and has been a rare area of potential bipartisan accord with Republicans. Trump, too, has long promised a big infrastructure plan.

The dozen Democratic lawmakers in the meeting with the president called it a constructive start. They said Trump agreed that infrastructure investments should go beyond roads and bridges and include broadband, water systems, and enhancements to the electrical grid.

Democrats also put the onus on President Trump to come up with a funding source, and said they would meet again in three weeks, when the president will present his ideas. The nation’s top business groups and labor unions support increasing the federal gasoline tax, currently 18.3 cents a gallon. It was last raised in 1993.

Asked whether Trump supports raising the gas tax, White House adviser Kellyanne Conway said before the meeting: “This president is the guy who lowers taxes.”

President Trump, Transportation Secretary Elaine Chao, adviser Ivanka Trump and a half-dozen other administration officials met with the 12 Democrats in the Cabinet Room.

Infrastructure is seen as the one issue with the best chance for the two sides to work together this Congress — and even that isn’t given good odds for a fruitful ending.

The meeting played out against the backdrop of high tensions over escalating Democratic investigations following the release of special counsel Robert Mueller’s report into Russian meddling. Lawmakers and the Republican president also have on eye on the 2020 elections, meaning every provision of an infrastructure package — including how to pay for it — will be made with that in mind.

More than one “infrastructure week” has already come and gone over the past two years with nothing to show for it. Still, advocates for an infrastructure package boost see a narrow window for action.

“I think a deal can be had if everybody is willing to put their battle axes away for a period,” said former Republican Rep. Bill Shuster of Pennsylvania, who served as chairman of the House’s transportation committee for six years.

A compromise could offer political benefits to both sides. Trump’s re-election prospects are tied to a strong economy that would get another boost from new road and bridge projects. House Democrats have passed an array of bills that have gone nowhere in the GOP-controlled Senate.

Pelosi has dozens of new Democratic House members who won in competitive districts, said Shuster, and “they need to be able to go home next year and say they’ve accomplished something.”

But the two sides also have some competing priorities that will complicate matters. The president and Republican leaders want to speed up the permitting process for building energy and transportation projects and that’s not on most Democratic lawmakers’ to-do lists. Democrats are looking for ways to pay for greater infrastructure spending without adding to the national debt, and that could mean higher fuel taxes.

Committees in both chambers of Congress have started to lay the groundwork for an infrastructure bill through hearings, with Democratic lawmakers hoping to have legislation ready for consideration by June or July.

The House Transportation and Infrastructure Committee will give every House lawmaker a chance to share their infrastructure priorities on Wednesday.

Then the committee’s chairman, Rep. Peter DeFazio, D-Ore., will lead a delegation to visit a dilapidated, century-old tunnel that connects New Jersey and New York. Experts say a new tunnel is essential to ensuring reliable rail travel throughout the Northeast, but the price tag will be steep.

The infrastructure issue has aligned the nation’s top business groups and unions, a rarity in Washington. The U.S. Chamber of Commerce has proposed increasing the federal fuel tax 5 cents a year for five years, then allowing it to increase with inflation.

Ed Mortimer, a vice president at the U.S. Chamber of Commerce, said the group would have the backing of lawmakers who face criticism back home for supporting a higher federal gas tax.

“We’re going to support any elected official willing to have a serious discussion and vote to raise revenue for infrastructure,” Mortimer said.

So far this year, Alabama, Arkansas, Ohio and Virginia have enacted gas tax increases, although Virginia’s only applies to a portion of the state. Some 30 states have done so since 2013.