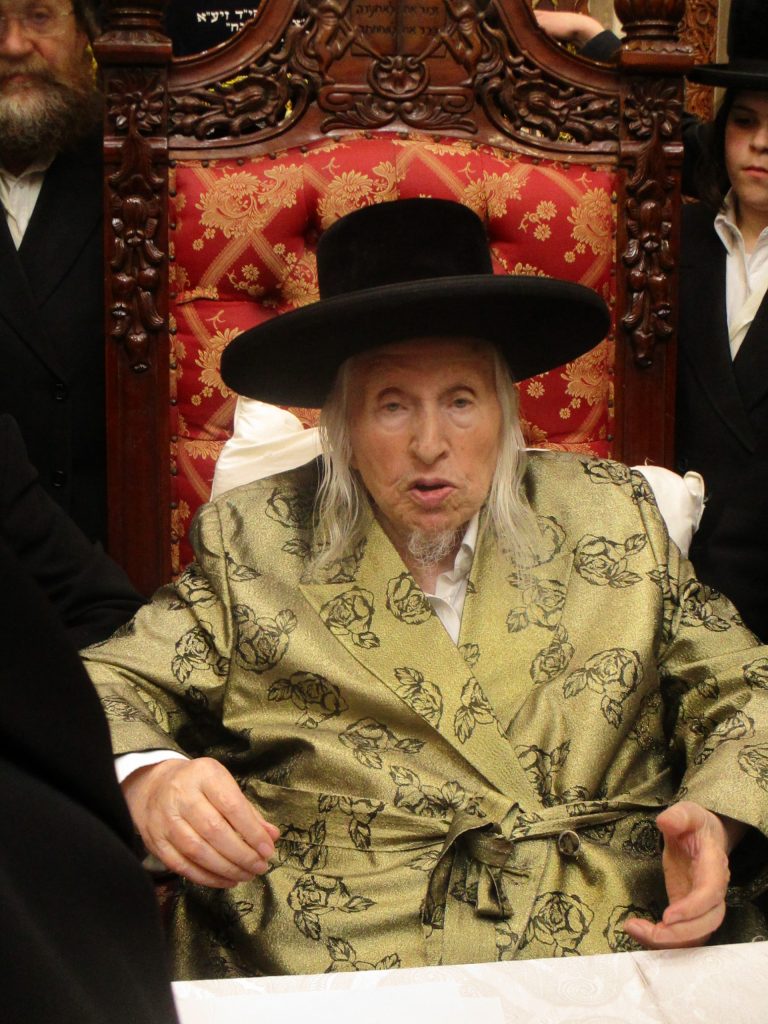 The Jewish community was plunged into mourning on learning of the petirah of the eldest Rebbe in Eretz Yisrael, the Kaliver Rebbe, Harav Menachem Mendel Taub, zy”a, on Sunday morning, at the age of 96.

The Rebbe – sixth in a direct paternal line to the founder of the Kaliv dynasty, Harav Yitzchak Eizik of Kaliv, zy”a – was born in Margate, Transylvania, in 5683/1923, to his father Harav Yehuda Yechiel Taub, the Rozler Rav, and his mother Rebbetzin Brocha Freida, a”h.

He was one of seven siblings, but only he and two sisters survived the horrors of the Holocaust.

He married Rebbetzin Chana Sara Shapiro, a”h, daughter of Harav Pinchas Shapiro, the Kechniya Rebbe, zy”a, a scion of the Nadvorna dynasty, before the start of the war.

In Sivan 1944, 75 years ago, he was put on a transport to Auschwitz, and he arrived there three days before Shavuos. Many of the Hungarian deportees came at that time to Auschwitz. While in Auschwitz, he was sadistically experimented upon by Josef Mengele, yimach shemo.

He was transferred from there to the Warsaw Ghetto and the Breslau concentration camp, and later to Bergen-Belsen.

Six months after the war ended, he discovered that his Rebbetzin had survived, and they were reunited in Sweden.

In 1947 they immigrated to America, and they settled in Cleveland, Ohio.

The Rebbe moved to Eretz Yisrael in 1962. Upon his arrival, the Rebbe created Kiryat Kaliv in Rishon LeTzion. The foundation stone of the new kiryah was laid on 7 Adar 5723/1963, the yahrtzeit of the founder of the Kaliv dynasty, Harav Yitzchak Eizik. In 5740/1980, the Rebbe moved his headquarters to Bnei Brak. In 5762/2002, the Rebbe’s court moved to Yerushalayim.

The Rebbe once explained the reason behind the Shema Yisrael: “Just a few hours before we were liberated, they took many Jews and threw them into the fire. I cried out Shema Yisrael and I said: Ribbono shel Olam, this might be, chas v’shalom, the last time I will be saying Shema Yisrael. Soon I’ll be with the rest of my family in Heaven. If you give me life, then I promise You that I will say time and again Shema Yisrael, declaring Your eternity with those who will outlive the war. ”

In addition, the Rebbe initiated other projects to mark and recall the Holocaust.

The Rebbe led a network of Kollelim and other mosdos haTorah. Another project of the Rebbe was a program called “Bar bei Rav d’chad yoma, a student of the beis medrash for one day,” which held day-long shiurim throughout the country on public holidays, when people were off from work. In addition, every year on 24 Elul, the yahrtzeit of the Chofetz Chaim, the Rebbe called upon the general public and the students of mosdos haTorah to conduct a speech fast for the entire day.

The Rebbe had a close connection with all Gedolei Yisrael, and was held in high esteem.

In recent months, the Rebbe’s condition deteriorated, yet he still took part in tefillos and tischen. The Rebbe’s last public appearance, with much mesirus nefesh, was at the event in Yerushalayim on behalf of United Torah Judaism.

Tefillos have been held for the Rebbe’s refuah, yet alas, the gezeirah was sealed and he was niftar at his home on Sunday.

The levayah will be held on Sunday afternoon from the Rebbe’s beis medrash in Yerushalayim, to Har Hamenuchos, where the Rebbe will be buried in the Chelkas Harabbanim, near the kever of the Belzer Rebbe, zy”a – with whom the Rebbe had a close relationship.