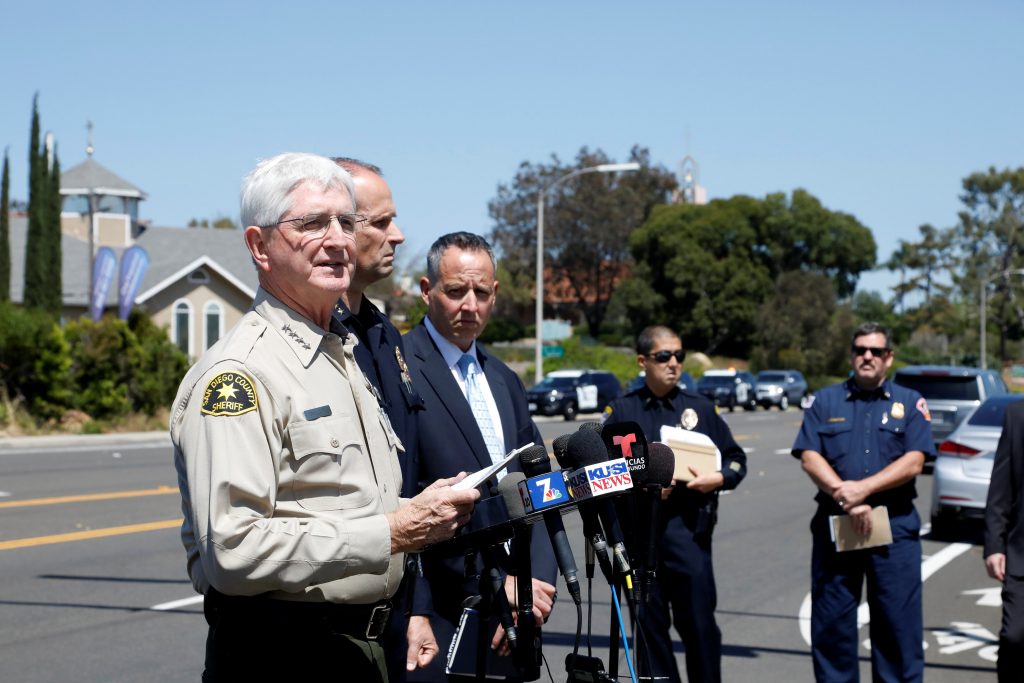 A 19-year-old man armed with a rifle opened fire inside a Chabad shul near San Diego as mispallelim gathered to daven on the last day of Pesach, killing an elderly woman and wounding three people, authorities said.

The man, whose name was not released, fled in a car and called 911 shortly afterward to say he was involved in the shooting at Chabad of Poway, San Diego Police Chief David Nisleit told reporters.

When an officer reached the man on a roadway, “the suspect pulled over, jumped out of his car with his hands up and was immediately taken into custody,” Nisleit said.

The officer found an AR-type rifle in the front passenger seat.

Poway Mayor Steve Vaus, speaking from a police command center, characterized the shooting as a “hate crime,” saying his assessment was based on statements uttered by the gunman when he entered the synagogue.

Nothing else was disclosed about a possible motive. But San Diego County Sheriff Bill Gore said investigators were reviewing the suspect’s social media posts and “his open letter,” suggesting the gunman may have left some kind of written manifesto.

Gore told reporters that four people were struck by gunfire and taken to Palomar Medical Center, where one of the victims, an “older woman,” died. The three other patients – “two adult males” and a “female juvenile” – were listed in stable condition, Gore said. The identities of the victims were not given.

There was no known threat after the man was detained, but authorities boosted patrols at places of worship as a precaution, Nisleit said.

An off-duty Border Patrol agent inside the shul opened fire as the shooter fled but didn’t hit him, Gore said.

A man who lives nearby, Christopher Folts, said on CNN he heard six to seven gunshots, then a man yelling, followed by six to seven more shots.

Vaus said that members of the congregation engaged the shooter to prevent further violence, and added that the community was targeted by “someone with hate in their heart.”

Vaus had earlier told MSNBC that the congregation’s Rabbi Yisroel Goldstein was shot in the hand.

“For this to happen only a week later at the end of the Passover […] is horrific,” he told the network.

“We are grateful to those in the congregation there that engaged the shooter and prevented this from being a much more horrific incident.”

“At this moment it looks like a hate crime, but my deepest sympathies to all those affected and we’ll get to the bottom of it,” he said

The shooting came exactly six months since a shooting at a Pittsburgh Jewish congregation killed 11 people in the deadliest attack on Jews in U.S. history.

In Pittsburgh, a truck driver who authorities say expressed hatred of Jews has been charged in the Oct. 27 rampage. He’s pleaded not guilty.