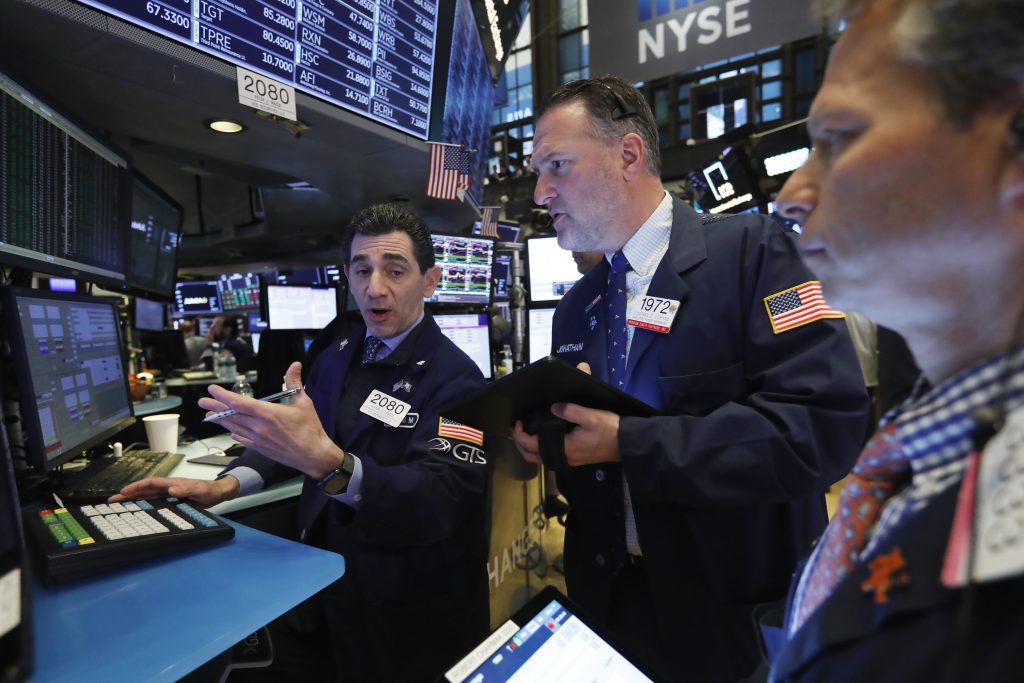 Anthem, Cigna and UnitedHealth Group were among the biggest decliners in the health care sector for the second straight day. Investors were hammering insurers amid fears over the potential impact on profits of health reform ideas being discussed in Congress.

Smaller company stocks fell more than the rest of the market.

Qualcomm led the gainers in the technology sector, adding to Tuesday’s 23% gain on news that the mobile chipmaker’s bitter legal dispute with Apple is over. In a related move, Intel climbed after pulling out of the smartphone modem market.

T-Mobile and Sprint were both lower on reports the Justice Department is questioning their proposed merger.

PepsiCo and Morgan Stanley rose after delivering better than expected quarterly results Wednesday. IBM and Netflix fell a day after reporting their earnings.

Investors continued to pore over company earnings reports, focusing on companies’ profit and revenue outlooks for the rest of this year. Analysts expect the first quarter results for S&P 500 companies overall to be the weakest in nearly three years.

“The market is in wait and see mode,” said Jamie Lavin, global investment specialist at J.P. Morgan Private Bank. “We’re only 10% through earnings season, but so far, so good.”

The lower start on Wall Street followed uneven trading in global markets, despite news that China’s economy grew at a better than expected 6.4% annual pace in the January-March quarter. The data suggests Beijing’s efforts to halt a slowdown are working, but its economy is still growing at the weakest pace since 2009.

The decline is partly due to investors favoring cyclical growth sectors, such as materials, energy and technology, at the expense of less risky seeming stocks.

More recently, presidential politics has hurt the sector. Democratic presidential candidates such as Sen. Bernie Sanders of Vermont, who is emerging as the early fundraising front-runner, has been making the case for a “Medicare for All” plan that could replace private coverage.

“There is a growing perception that the popularity of universal health care is growing among the electorate, forcing investors to take notice as the odds of meaningful regulation increase,” Alex Young, managing director of global markets research at FTSE Russell, wrote in a research note Wednesday.

SPOTTY RECEPTION: Sprint and T-Mobile shares fell after a Wall Street Journal report cast doubt on the likelihood of government approval of the companies’ $26.5 billion merger.

The Journal said that Justice Department antitrust personnel reviewing the takeover questioned the companies’ reasoning for it in a meeting this month. Talks between regulators and the companies are ongoing, according to the report, which cited unnamed people familiar with the matter.

BIG SETTLEMENT: Qualcomm jumped 11%, adding to a big gain Tuesday on news that the mobile chipmaker’s bitter legal dispute with Apple is over. It centered on technology that enables iPhones to connect to the internet.

In a related move, Intel climbed 3.6% after pulling out of the smartphone modem market.

ON TRACK: Railroad operator CSX climbed 4.5% a day after it turned in quarterly results that topped Wall Street’s forecasts.