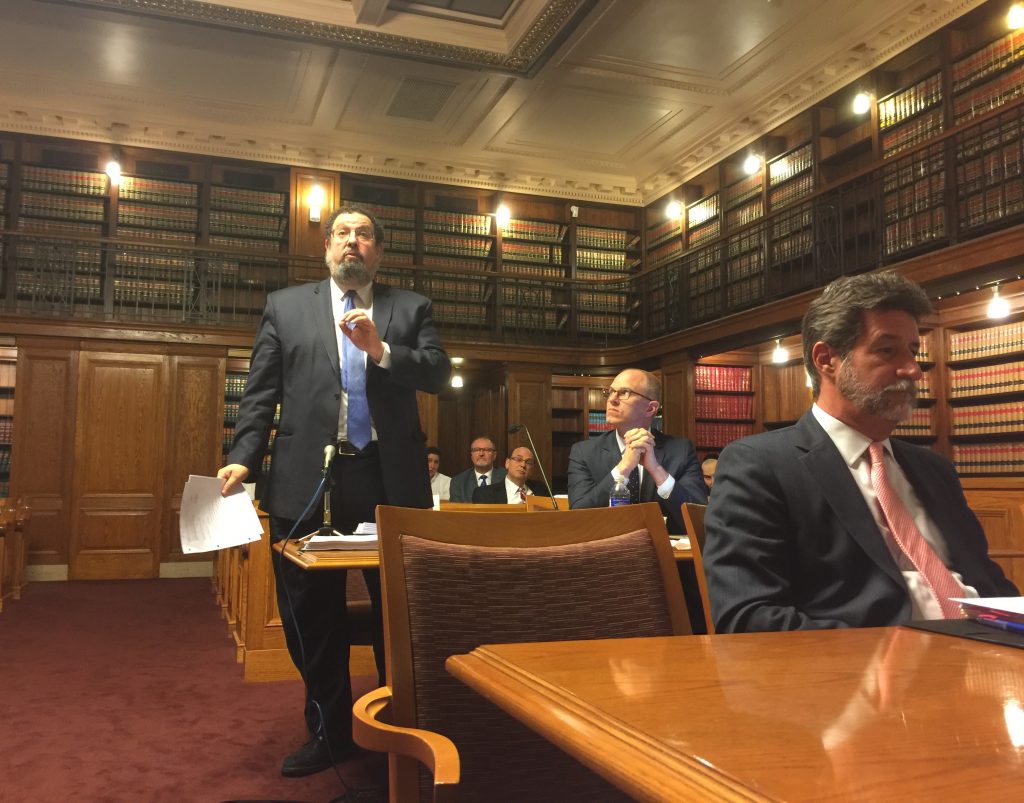 Private-school advocates argued in court Monday for a preliminary injunction against implementation of New York state’s new education guidelines, but no ruling was issued immediately.

New York State Education Commissioner MaryEllen Elia rolled out a new rubric for oversight of private schools last December, the culmination of a years-long battle, largely fueled by a group called YAFFED (Young Adults for Fair Education). Private schools have long been obligated by law to provide an education that is “substantially equivalent” to that of public schools. The Education Department says the new list of requirements – which include specific subjects and a minimum number of hours of instruction for each subject ­ are merely “guidelines” as to what constitutes substantial equivalency, but private-school advocates decried what they deemed an unlawful Education Department intrusion into private-school curricula which circumvented the legal legislative and rulemaking process.

Michael Verde, attorney for the independent schools, argued that legal precedent dictates that only the legislature can create specific standards and tests by which qualifications for private school curricula and teachers may be measured. In that 1948 case, Packer Collegiate Institute v. University of the State of New York, the New York state Court of Appeals held that “it would be intolerable for the Legislature to hand over to any official or group of officials an unlimited, unrestrained, undefined power to make such regulations … and to grant or refuse licenses to such schools depending on their compliance with such regulations.”

Verde argued that with the new requirements, the Education Department “has taken the two words [substantially equivalent] and set up an entire regulatory scheme.”

“They are not allowed to do that,” said Verde. “Packer Collegiate prohibits … this sort of action.”

Asked by Justice Christina L. Ryba about what sort of oversight the government could have on private schools, Verde said it could intervene if a particular school is not giving proper education. However, it cannot make a statewide inspection program, delegated to local school authorities, based on intricate requirements.

Under the new requirements, these local school authorities (LSAs) would determine whether a private school is providing a substantially equivalent education. If a school is noncompliant, and subsequent remedial measures are not successful, the school may lose government funding for items such as textbooks, special education and transportation, and students who attend these schools may be considered truant.

LSAs are “elected officials, and their powers cannot be increased or changed by an administrator, only by the legislature,” argued Verde.

The law just says “substantially equivalent,” said Dague. “Someone has to put some meat on [those] bones.”

Legally binding rules must follow a special rulemaking process, which include publishing the proposed rule, giving time for public comment, and having a public hearing and vote by the state Board of Regents.

Dague also argued that the suit wasn’t yet “ripe” for a legal ruling – that is, whether the private schools and parents would suffer imminent and irreparable harm if their requested injunction were not granted. Dague said that the new guidelines are meant to begin a conversation and initiate a process between the LSAs and the schools on how to achieve substantial equivalency. And if a yeshivah is not compliant with an item on the required education checklist, Dague said, the LSA will say, “Let’s talk, how can we do this, how can we get that box to a ‘Yes’? … There’s no rush to judgment, there’s nothing happening tomorrow.”

But Avi Schick, attorney for the yeshivos, argued, “There’s no doubt that the requirements of the guidelines are in place” and that “every school is supposed to meet every one of those requirements. Now, not in the future.” Moreover, he argued, deprivation of constitutional rights, such as freedom of religion and speech, constitutes irreparable injury.

“The harm is here, the Department is poised to take action, and that’s why we are here, Your Honor, asking for a preliminary injunction,” Schick said.

Schick also argued that the Department is only looking at “inputs” – whether a specific curriculum is taught – rather than “outputs,” the ultimate success of private-school students.

Asked by Ryba about the input vs. output issue, Dague said that results are indeed taken into account, because the new checklist “does look for … the development from grade to grade.”

Michael L. Costello, attorney for the Catholic schools, in urging for the injunction, focused largely on freedom-of-religion issues infringed upon by the education requirements.

“Our schools are on the cusp here of being inspected and evaluated with this impermissible entanglement that violates various constitutional provisions,” said Costello. “The specter is not only substantial, but it’s real here, of this infringement.”

Costello also noted how the LSAs govern public schools, which are Catholic schools’ “competitors with respect to enrollment … the clashes are incredible.”

Verde argued that the new requirements would deprive private schools of their uniqueness.

All items on the checklist must be followed without exception; Dague admitted that yeshivos would have to come up with a way, for example, to comply with providing a course in theater.

In comments to Hamodia after the hearing, Schick said, “The most troubling revelation by the state today was when it said that yeshivah parents should not have the choice to determine whether certain courses are not best for their children.

“The state said this specifically with respect to arts and theater – that yeshivah parents should not be able to choose not to have their child taught those courses.”

“Moreover,” said Shick, “the state’s mindset was revealed when its lawyer spoke to the judge about parents conscripting their children.”

In arguing for the state’s compelling interest in regulating education, Dague had said that “Education of children is so fundamental to the government interest. Because education for the voiceless child being conscripted at their parents’ will to what they want is so important … ”

“Parents love, educate, raise and nurture their children,” said Schick. “It’s the state that is trying to conscript the children into a classroom where a public-school curriculum is taught, even though their parents chose otherwise.”

There is no timetable for when Ryba will rule.

For those seeking a clue as to how she might rule, Ryba asked Dague far more questions than she did the schools’ attorneys. And her ruling will likely hinge on how she interprets the checklist, as she asked Dague, “Don’t you think this case boils down to the interpretation of that checklist, though? I think in this case it appears that the parties do not agree whether or not that’s a guideline, whether or not that’s a rule. So I think that there’s some discrepancy with regard to what that is.”