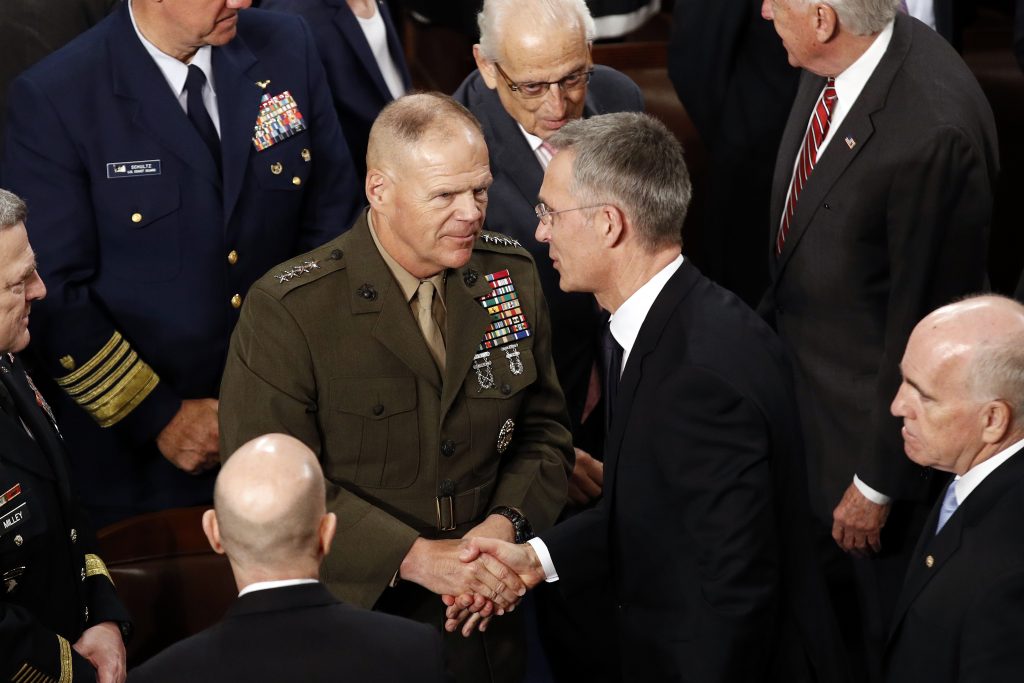 In the first address to Congress by a NATO head, Jens Stoltenberg on Wednesday acknowledged serious divisions within the alliance and called for bigger defense budgets to cope with global challenges such as Russian assertiveness, the core reason NATO was created in Washington 70 years ago this week.

“We have to be frank,” Stoltenberg said before a joint meeting of Congress. “Questions are being asked on both sides of the Atlantic about the strength of our partnership. And, yes, there are differences.”

The NATO secretary general credited President Donald Trump with compelling allies to spend more on defense, without noting that Trump also has questioned the value of the alliance and suggested that some members are freeloaders.

President Trump’s criticisms have upset a delicate balance within an alliance that has long counted on Washington to be its leader. Stoltenberg’s speech provided a diplomatic counterpoint to Trump’s sometimes derisive rhetoric, and the enthusiastic reception he received from both parties in the House was testament to an enduring pro-NATO consensus in Congress.

“The secretary general delivered to Congress a powerful affirmation of the value of the NATO alliance,” said Rep. Mac Thornberry, a Texas Republican.

James Stavridis, a retired Navy admiral who was NATO’s top commander from 2009 to 2013, called the Stoltenberg address a high point in recent U.S.-European relations.

“Given the president’s evident and frequently vocalized skepticism of the alliance, it is clear that Congress — on a bipartisan basis — wants to put the full weight of the legislative branch behind NATO,” Stavridis said. “We will never find a better pool of allies in the world than the Europeans, and this address underscores the importance of the trans-Atlantic bridge, which has been creaking a bit lately.”

Stoltenberg made a point of highlighting the benefits to the United States of having NATO allies. He noted, for example, that in response to the attacks of Sept. 11, 2001, NATO invoked Article 5 of its founding charter to come to the aid of a member under attack. He said allies also provide the U.S. with valuable military support in peacetime, from tracking submarines in the Arctic to providing bases in Europe from which the U.S. can project power.

“Our alliance has not lasted for 70 years out of a sense of nostalgia or of sentiment,” he said. “NATO lasts because it is in the national interest of each and every one of our countries.”

Stoltenberg on Thursday will lead a meeting of NATO foreign ministers, hosted by Secretary of State Mike Pompeo, to mark 70 years since the alliance’s founding charter, the North Atlantic Treaty. The alliance has grown from its original 12 members to 29, with the Republic of North Macedonia about to become the 30th member country.

Stoltenberg, a two-time former prime minister of Norway, is the first head of NATO to address a joint meeting of Congress. He touted the alliance’s long record of partnership but also noted it has a history of coping with internal divisions, including strong opposition by France, Germany and other members to the 2003 U.S. invasion of Iraq.

“Open discussions and different views is not a sign of weakness,” he said. “It is a sign of strength. So we should not be surprised when we see differences between our countries. Today there are disagreements on issues such as trade, energy, climate change and the Iran nuclear deal. These are serious issues with serious disagreements.”

President Trump’s criticisms are not NATO’s only source of friction. The alliance also is at odds with long-time member Turkey over its planned purchase of a Russian air defense system that is not compatible with the allied air defenses. The Trump administration is threatening to stop delivery to Turkey of the newest U.S. fighter jet, the F-35, if the Turks go through with their plan to buy Russia’s S-400 system instead of the American Patriot system.

Trump has sharply criticized other NATO members, including Germany, for not meeting spending targets. On Tuesday, he praised the generally upward trend among the European allies, but hounded them to pay even more because he believes America still shoulders a disproportionate share of the cost of protecting Europe.

In a meeting at the White House, Trump and Stoltenberg had kind words for each other. But in the past, Trump has called NATO “obsolete” and suggested he might pull the U.S. out of the alliance if member nations didn’t significantly boost defense spending.

“We’ve worked together on getting some of our allies to pay their fair share,” Trump told reporters. “At some point, it’s going to have to go higher.”

Trump took credit for the increased spending. However, spending by NATO countries, which dropped after the end of the Cold War, has actually been rising since 2014.

After Russia’s 2014 annexation of Ukraine’s Crimean Peninsula, member countries agreed to boost defense budgets and “move toward” spending 2% of their gross domestic products on defense by 2024. The U.S. spends about 3.4% of its GDP on defense.

Since President Trump took office, European allies and Canada have added $41 billion to their defense budgets. By the end of next year, this is scheduled to reach $100 billion, Stoltenberg said. Germany remains the main target of Trump’s ire because it plans to spend 1.5%, below the 2% guideline, by 2024.

Stoltenberg has said the 2% guideline was not invented by the United States and was a target the 29 allies set in 2014.

“The allies are really stepping up,” Stoltenberg said in an interview with The Associated Press.