This piercing cry was delivered at the levayah Tuesday morning of the Skulener Rebbe, zy”a, by his eldest son, who was crowned as the new Rebbe.

The streets around the modest Skulener beis medrash were a sea of black as Boro Park gathered to bid farewell to the elder Gadol who had graced the neighborhood for four decades. There were countless scenes of Rebbeim leading their young charges along the street, with a continuous stream of people coursing toward the shul on 13th Avenue and 54th Street.

The only two maspidim were Harav Yeshayah Yaakov Portugal, the Rebbe’s eldest son and successor, and Harav Shimon Yoel Weinberger, the kehillah’s dayan and a son-in-law of the Rebbe.

Harav Yisrael Avraham Portugal was niftar on Monday at age 95. He had led the Skulener kehillah for nearly 37 years, ever since he was thrust into the position upon the petirah of his father. Kevurah was in the Vizhnitzer beis hachaim in Monsey in the same ohel where his father is.

Harav Yeshayah Yaakov, the Rav of the Skulener kehillah in Montreal, was crowned as the next Skulener Rebbe at the levayah by his brother-in-law, who referred to him as the “memalei makom aviv — successor of his father.”

The new Rebbe tearfully begged his late father to continue davening for Klal Yisrael, and repeated his father’s frequent admonishments about tznius and kedushah. He recalled his father’s battles for kedushah, mentioning in particular for women to wear shorter sheitels and longer clothes — “lange kleider, lange yahren — long clothes bring long life,” he would say — for people not to use the internet and to have refined music at simchos.

Rabbi Moshe Leib Shochet, the director of development at Yeshivah Torah Vodaath, said that the Rebbe’s petirah reminded him of the Mishnah that when various Tanna’im passed away, this or that middah disappeared with them.

“When the Rebbe was niftar, botlah kedushah — kedushah disappeared,” Rabbi Shochet told Hamodia. “He represented kedushah in this world.

“The nisyonos are so great,” he added. “Who is going to be the one who will represent the kedushah? I’m crying like a baby, because how am I now going to face the challenges of the generation?” 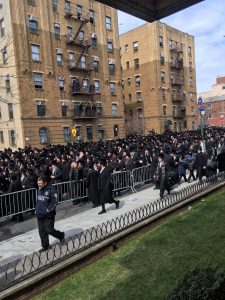