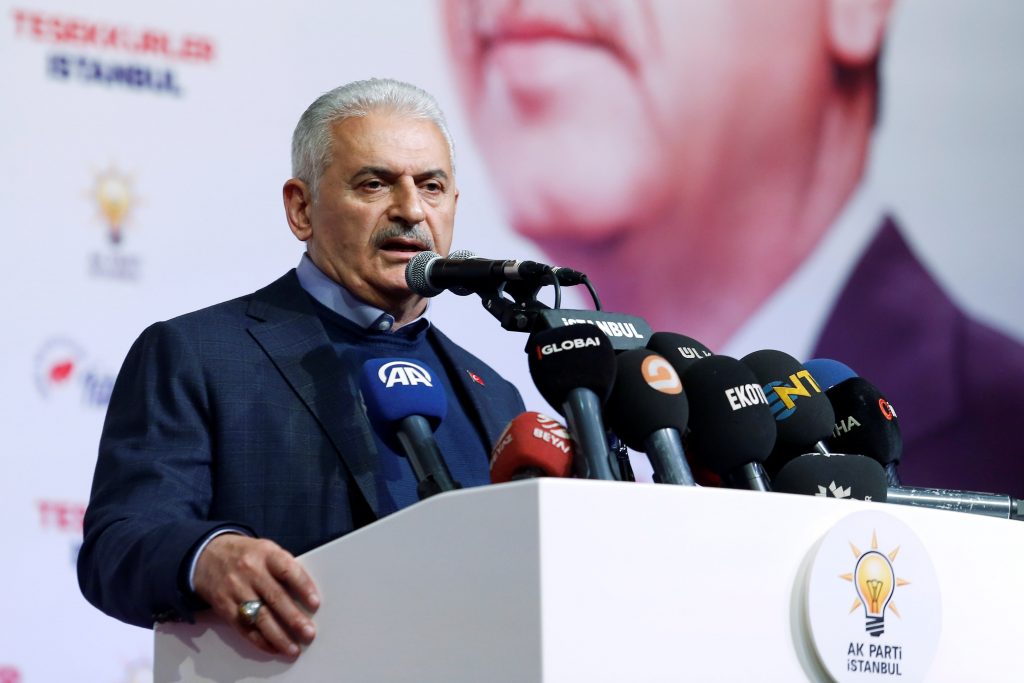 Turkey’s main opposition party said it won control of Ankara in Sunday’s local elections, defeating President Tayyip Erdogan’s AK Party in the capital for the first time, and challenged his party’s claim to have held Istanbul by the narrowest margin.

Defeat for Erdogan’s party in Ankara would be a significant setback for the president, who campaigned relentlessly for two months ahead of a vote he described as a “matter of survival” for Turkey. Losing Istanbul, Turkey’s largest city and a platform for his own political career, would be a greater blow.

With more than 92 percent of ballots opened, the mayoral candidate of the CHP, Mansur Yavas, had secured 50.6 percent, giving him a 3.4-percentage-point lead over his AKP rival.

In Istanbul, Turkish TV channels showed that AKP candidate and former Prime Minister Binali Yildirim had the narrowest of leads with 98.8 percent of ballot boxes opened, securing 4,111,219 votes against 4,106,776 for his rival, Ekrem Imamoglu.

Yildirim declared victory, but his claim was challenged by Imamoglu who said votes were still being counted. Broadcasters stopped updating their vote counts after Yildirim’s declaration.

“We have to accept the fact that we have won and lost some cities; this is a necessity in democracies,” Erdogan said in Istanbul, pledging that Turkey would now focus on its troubled economy in the run-up to national elections in 2023.

“We have a long period ahead where we will carry out economic reforms without compromising on the rules of the free-market economy,” he told reporters.

Erdogan has dominated Turkish politics for more than 16 years, thanks mainly to strong economic growth and support from a core constituency of pious, conservative Muslim Turks.

A consummate campaigner, he has been the country’s most popular, although divisive, modern politician, tightening his hold on power in elections last year that ushered in an executive presidency, approved in a bitterly fought 2017 referendum.

But a currency crisis after last year’s election dragged the lira down by 30 percent and tipped the economy towards recession. With inflation close to 20 percent and unemployment rising, some voters appeared ready to punish the president.

“The people have voted in favor of democracy, they have chosen democracy,” CHP leader Kilicdaroglu said.

As authorities again scrambled to shore up the lira over the past week, Erdogan cast the country’s economic woes as resulting from attacks by the West, saying Turkey would overcome its troubles and adding he was “the boss” of the economy.

“The aim behind the increasing attacks towards our country ahead of the elections is to block the road of the big, strong Turkey,” Erdogan told a rally in Istanbul on Saturday.

The lira traded at 5.61 to the dollar after initial results came in, compared with 5.55 at Friday’s close and 5.65 in U.S. trading hours late on Friday.

The election was marred by violence, with two people killed in Malatya province and three others in the southern province of Gaziantep, Turkey’s electoral board said.

In mainly Kurdish southeast Turkey, residents celebrated as the pro-Kurdish opposition Peoples Democratic Party (HDP) won back municipalities that authorities had taken over two years ago, accusing the HDP of terrorist links. The HDP denies links to the outlawed terrorist Kurdistan Workers’ Party.

“They robbed us of our will and we overturned this,” Diyarbakir resident Abdullah Elmas said.

In the days leading up to the vote, Erdogan held around 100 rallies across the country. He blasted his rivals as terrorist supporters and warned that if the opposition candidate won in Ankara, residents would “pay a price”.

His opponents have denied the accusations and challenged his characterization of the elections as a matter of survival.

“We’re electing mayors. What does this have to do with the country’s survival?” Kilicdaroglu told a rally in Eskisehir.