Op-Ed ANALYSIS: A ‘Road Map’ for the Coming Fight Over the Mueller Report
Op-Ed 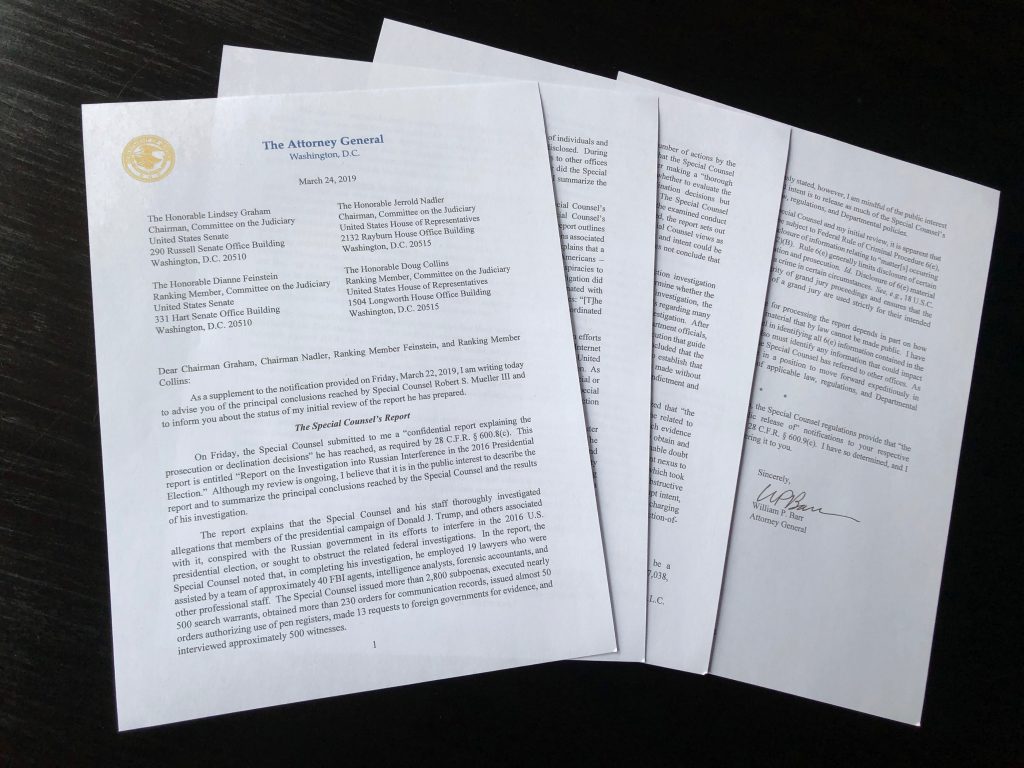 Barr’s letter was well-crafted to suggest a conciliatory tone in response to the widespread criticism generated by his previous one setting out Mueller’s principal conclusions. Barr wrote that he shares Nadler’s desire to ensure Congress and the public can read the Mueller report, said the department would release it by mid-April, and offered to testify publicly before both the House and Senate.

Nadler’s response was more tart. He repeated a demand that Barr provide the full report, without redactions, by Tuesday. And he insisted that the Justice Department assist Congress in seeking a court order to release all grand jury information to the House Judiciary Committee.

None of this will happen, as Nadler surely knows. Most notably, a careful reading of Barr’s two letters strongly suggests that the cooperative veneer is just that. The department likely will redact all grand jury information before turning over the report and likely will rebuff Nadler’s request to work cooperatively to urge the district court to authorize disclosure of grand jury material to his committee.

Mueller’s investigation made extensive use of the grand jury. The Justice Department, with Mueller’s help, is identifying all grand-jury material in the report. Grand-jury material includes the testimony transcripts, of course, but also an array of other items such as exhibits that might tend to reveal the identities of witnesses or jurors.

Barr’s letters advance a strict view of Federal Rule of Criminal Procedure 6(e)(3)(E), which limits disclosure of information from grand jury proceedings to five specific situations. The exceptions all relate roughly to a given, ongoing prosecution or related ones; none of them comfortably covers a disclosure to Congress for consideration in oversight or impeachment hearings, although there are a few scattered cases holding otherwise.

The coming legal battle will be waged over whether the exceptions in the rule are exclusive. Some courts have determined that the list is not strictly limited in that way, and in particular that district courts have inherent supervisory authority to order release in a case of “special circumstances” in which there is a significant public interest in the material. Plainly, that fits the Mueller report.

But the Justice Department has staunchly opposed that view. It has insisted, including in a pending case in the D.C. Circuit, that the only instances in which disclosure may occur are the ones set out in the text of Rule 6(e).

Anyone familiar with Barr’s jurisprudential views would safely guess that he is unlikely to reverse Justice Department policy and urge the courts to recognize an extra-textual “inherent authority” in the federal courts to order disclosure.

Nadler, along with many other proponents of full release to Congress, invoke the Watergate precedent. In that case, the court permitted special prosecutor Leon Jaworski to supply the “road map” bare-bones summary of key evidence to the House Judiciary Committee that became a basis for that body’s impeachment inquiry.

But there are several features of the Watergate precedent that don’t apply to release of Mueller’s grand jury information. Most important, the court approving the transmission to the House concluded that it was only President Richard Nixon whose rights of confidentiality were seriously implicated, and Nixon didn’t object to the report’s release. But with Mueller, the overall antagonism between the special counsel’s office and the subjects and targets of the probe guarantees that several uncharged third parties (e.g., Donald Trump Jr.) would oppose disclosure. That’s a significant difference.

Thus, look for the Justice Department to identify the grand jury material in the report and then take the position that this material may not be disclosed, even by court order. Nadler’s possible recourses will be (1) to negotiate, from a position of relative weakness, for a subset of the materials; or (2) to bring suit in federal court arguing that the court has “inherent authority” to order the department to produce the report without grand jury redactions.

A lawsuit will take time and face uncertain prospects, based on the composition and recent decisions of the D.C. Circuit. But if Barr and the Justice Department play hardball, Nadler probably won’t have a better choice.