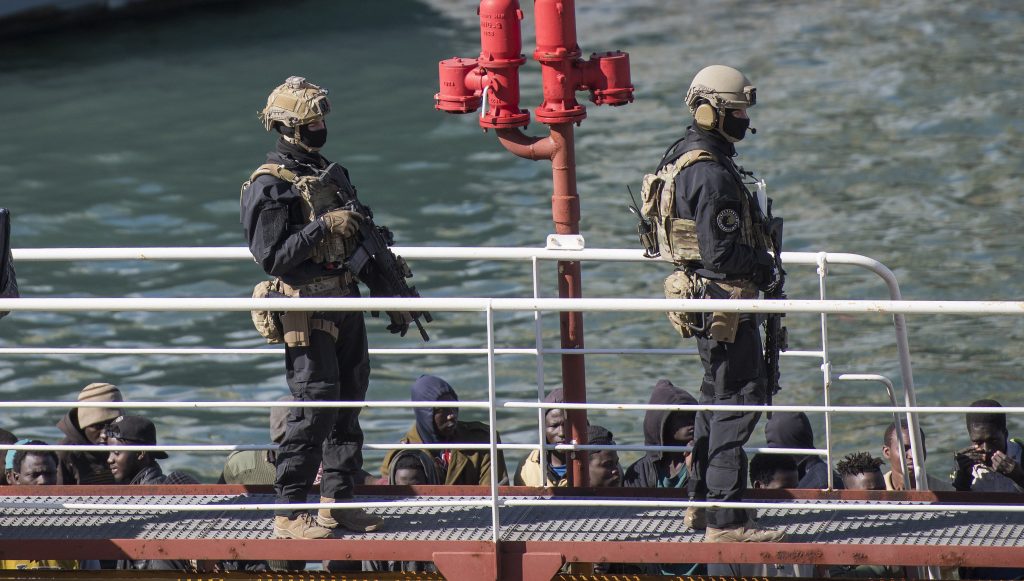 A Maltese special operations team boarded a tanker and took back control of it Thursday after the ship was hijacked by migrants it had rescued at sea. Italy’s hard-line interior minister slammed the migrants as pirates but aid groups said they acted in self-defense, blaming instead the European Union’s policy of sending migrants back to lawless Libya.

Armed military personnel stood guard on the ship’s deck, and a dozen or so migrants were also visible, as the oil tanker El Hiblu 1 docked safely Thursday at the Maltese port of Senglea. Five suspected ringleaders were led off in handcuffs.

In all, the tanker had rescued 100 people — 38 men, 15 women and 47 claiming to be minors, Malta officials said. A pregnant woman and a child were being treated at a hospital as a precaution.

On Wednesday, authorities in Italy and Malta said the group had hijacked the vessel after it rescued them in the Mediterranean off Libya, and forced the crew to put the Libya-bound vessel on a course north toward Europe.

Maltese armed forces said the captain told them, when the ship was still 30 nautical miles offshore, that he was not in control of the vessel “and that he and his crew were being forced and threatened by a number of migrants to proceed to Malta.”

No details were given of what force or threats were used, and there was no immediate word on the condition of El Hiblu 1’s crew. But a military official not authorized to speak to the media said the migrants did not have weapons but that the captain and crew were outnumbered and forced to surrender.

Italian Interior Minister Matteo Salvini described the takeover as “the first act of piracy on the high seas with migrants” as the alleged hijackers. Salvini, who insisted the ship would not be allowed to dock in Italy, praised the Malta’s interception.

“Immigration is managed by criminals and should be blocked by any legal means necessary,” Salvini was quoted as saying by the Italian news agency ANSA.

Humanitarian organizations rejected Salvini’s characterization of piracy, saying that migrants have been repeatedly mistreated and tortured in Libya . They have long protested EU protocols to return migrants rescued offshore to the lawless northern African nation.

The aid group Sea Watch said the migrants’ actions “were in self-defense against the deadly consequences forced upon them by Europe’s inhumane border policy.”

Last year, 2,299 migrants died at sea while trying to reach Europe, according to the International Organization for Migration. So far this year, 289 have died.

The ship had been heading toward Italy’s southernmost island of Lampedusa and the island nation of Malta when Maltese forces intercepted it. The special team that restored control to the captain was backed by a patrol vessel, two fast interceptor craft and a helicopter.

“We do not shirk responsibility despite our size,” he said, pledging to follow international rules.

Still, both Italy and Malta have refused to open their ports to humanitarian ships that rescue migrants at sea, which has created numerous standoffs as European governments haggle over who will take them in.

A private group that operates a rescue ship and monitors how governments treat migrants, Mediterranea, urged compassion for the group on the hijacked vessel in Malta. It said it hoped European countries would act “in the name of fundamental rights, remembering that we are dealing with human beings fleeing hell.”

Mass migration to Europe has dropped sharply since 2015, when the continent received 1 million refugees and migrants from countries in the Middle East, Asia and Africa. The surge created a humanitarian and political crisis in which desperate migrants frequently drowned at sea when overloaded smuggling boats capsized. Key arrival spots such as Italy and Greece have then struggled to house large numbers of asylum-seekers.

Along with the dangerous sea journey itself, those who attempt to cross the Mediterranean risk being stopped by Libya’s coast guard and held in Libyan detention centers where human rights groups say beatings, abuse and torture are routine.

EU members “alert the Libyan coast guard when refugees and migrants are spotted at sea so they can be taken back to Libya, despite knowing that people there are arbitrarily detained and exposed to widespread torture, killings and exploitation,” said Matteo de Bellis, an expert on migrants for Amnesty International.

EU countries, facing some domestic opposition to welcoming immigrants, have decided to significantly scale down an EU rescue operation in the Mediterranean and have decided in principle to withdraw their ships, which would mean continuing the mission with air surveillance only. A formal decision has to be made by Sunday, when the mission’s mandate expires.

Commercial ships have been increasingly caught between European governments hostile to taking in new migrants and the obligation under international maritime law to save those needing help at sea.

Last November, dozens of migrants seized control of a container ship that had picked them up in the Mediterranean, barricading themselves inside and refusing to disembark in the Libyan port of Misrata. After 10 days, Libyan authorities forcibly removed them and brought them to a detention center.

During the standoff, several migrants on the vessel told The Associated Press that six commercial ships had seen their rickety boat foundering but passed them by before they were picked up by the seventh.