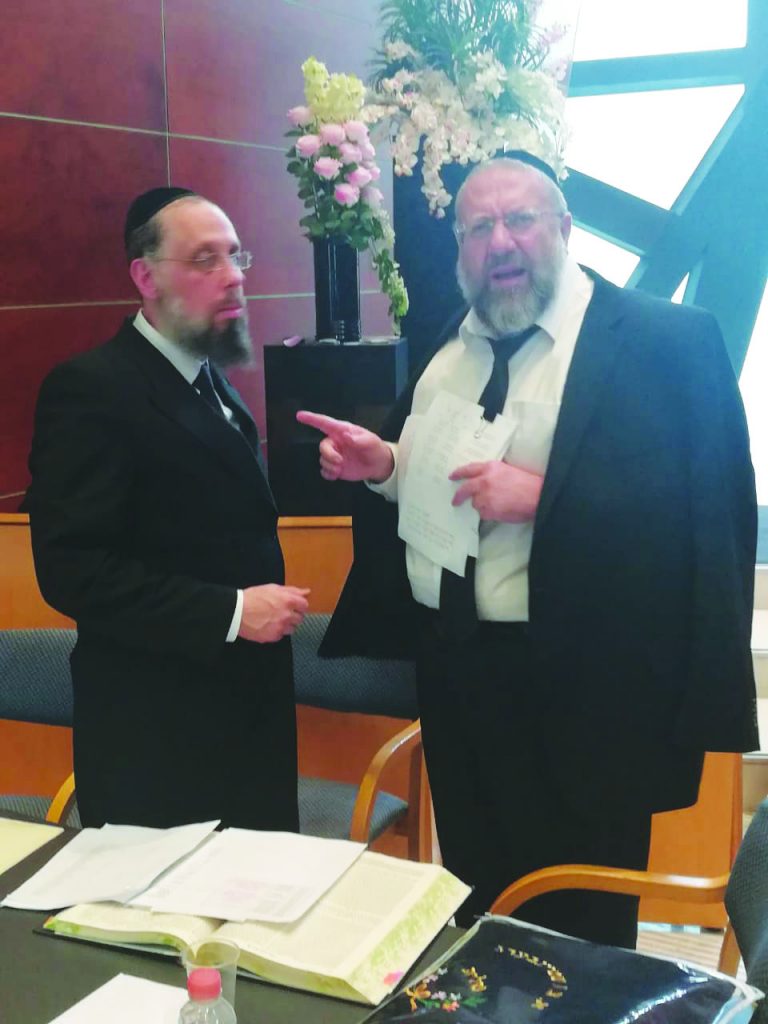 “It was absolutely amazing. I was shocked to observe the fervor of the learning, the real kol Torah that one can expect to find in a full beis medrash.” This is how Rabbi Tzvi Steinberg, Rav of Congregation Zera Avraham in Denver, Colorado, described his recent visit to Yeshiva Keter Torah Tecamachalco in Mexico City.

Yeshiva Keter Torah Tecamachalco, under the leadership of the Rosh Yeshivah, Chacham Shaul Credi, includes an evening beis medrash for baalei batim in Mexico City. Talmidim in the evening beis medrash must adhere to a strict program of learning for three hours each evening, including Sundays, and most are involved in high level intense learning, leading up to semichah in Shulchan Aruch Orach Chaim.

The talmidim of the yeshivah travel to Lakewood approximately once every year and a half to be tested by bochanim in Lakewood, and a trip to Lakewood has been scheduled for March 26.

However, there were some talmidim who were unable to commit to the trip for various reasons, so Rabbi Steinberg, who formerly served as a bochen in Beth Medrash Govoha, was asked to come to Mexico City to administer bechinos.

He agreed to come, together with his son, whose bar mitzvah took place on Purim. While in Mexico City, Rabbi Steinberg spent an entire Shabbos delivering drashos and being mechazek the community.

Mr. David Urfali explains more about the Keter Torah Tecamachalco program. “Our baalei batim work during the day and come to learn on Sunday through Thursday evenings. We have about 150 talmidim and there are a few different programs, but about 80 talmidim are part of the semichah program. There are several chaburos on different levels for the semichah program, but we all learn the halachos intensely, including the Gemara and Rishonim.”

There are several chaburos which are led by dedicated Roshei Chaburah, including Rabbi Ari Franco, Rabbi Moshe Amiga and Rabbi Nessi Kabani.

If he does not conform to these expectations, the “punishment” is that he is moved to a lower level chaburah until he shows that he has the proper level of commitment.

The flight from Denver to Mexico City was scheduled for Wednesday, March 13. However, due to a huge blizzard in the Midwest, flights were cancelled. Nevertheless, Rabbi Steinberg was determined that he would not disappoint the people waiting for him in Mexico City, and with great effort, found another flight that would get him to Mexico City before Shabbos, although via a very roundabout route. The community in Mexico City was extremely grateful to him for his dedication.

Rabbi Steinberg finally arrived at the yeshivah in Mexico City late Thursday evening, where he was greeted excitedly. He immediately delivered a shiur in hashkafah, explaining the importance of in-depth learning.

After the shiur, Rabbi Steinberg began giving bechinos to the talmidim until the wee hours of the morning. On Friday, Rabbi Steinberg woke up early and spent the entire day giving more bechinos.

On Shabbos, davening in the yeshivah was very well attended, as all were very anxious to hear Rabbi Steinberg’s drashos and divrei Torah. On Leil Shabbos, there was an oneg Shabbos with beautiful zemiros; the attendees especially enjoyed hearing the zemiros of the young Mordechai Leib Steinberg.

After Havdalah, the kehillah presented Mordechai Leib Steinberg with some beautiful gifts in honor of his bar mitzvah. A gift and a plaque were presented to Rabbi Steinberg for his commitment, chessed and imparting teachings to the people of Mexico City.

One of the main messages relayed by Rabbi Steinberg during Shabbos was the importance of making Torah part of every aspect of our lives. “The Gemara in Maseches Eruvin states that Torah is not found with businessmen and merchants, but here we are testing baalei batim, and they are very knowledgeable. How can we resolve this contradiction?” Rabbi Steinberg questioned.

“The answer is that they may work during the day, but they are bnei Torah. If someone is a ben Torah, it is evident in everything that he does: the way he talks, walks, his honesty in business and his shalom bayis.”

The Mexico City community was extremely inspired by Rabbi Steinberg’s presence during Shabbos. Over the course of approximately 48 hours, Rabbi Steinberg spoke seven times, and administered 26 bechinos on the difficult topic of amirah l’akum, He was extremely impressed with the proficiency and high level of learning of the baalei batim.

“It was delightful to hear them being able to accurately grasp these difficult halachos. I always find it extremely gratifying to encourage people who are involved in learning to learn even more. It was a very uplifting experience for both myself and my son.”